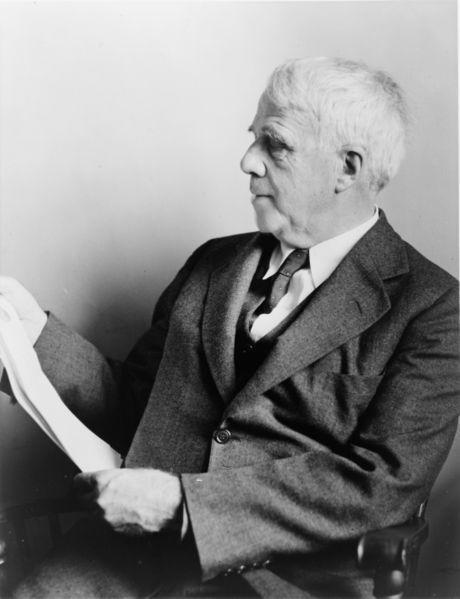 Four time recipient of the Pulitzer Prize for Poetry, Robert Frost (1874 - 1963) was, and remains, an icon on the American literary landscape. Though born in San Francisco, he is closely identified with New England and his poems dealing with rural life. We feature Frost in Pulitzer Prize Winners.

My favorite story about Robert Frost was told by a visiting professor while I was in college. It's a story worth sharing . . .

When Frost was 86 years old, he was honored by president-elect John F. Kennedy to read at his Jan 20, 1961 inauguration. Frost was reportedly quite fond of J.F.K. and labored to write a special poem for the event. The words did not come easily. I think we have all been in that situation, where the desperation of desire complicates the task. The chore was made more difficult by the fact that Frost was nearing the end of his life and was no longer at the height of his powers. Still he labored and eventually produced a new poem for Kennedy's inauguration.

When the day of the inauguration approached, so did inclement weather. Snow started to fall on the afternoon of January 19th, with wind gusts from 20-25 miles per hour as the temperatures dropped into the 20s. The snow continued into the 20th, dropping 8 inches of snow. The city rallied to prepare for the inauguration, with volunteers taking to the streets to clear the snow. When the 21st dawned, the stage was set:

By sunrise, the snow had ended and the skies were clearing, but the day remained bitter cold ... [D]espite the cold, a large crowd turned out for the swearing-in ceremony and inaugural parade. At noon, the temperature was only 22°F and the wind was blowing from the northwest at 19 mph, making it feel like the temperature was 7°F above zero.

When Frost took to the stage, the old man -- blessed with rare sensibility and the wisdom of age -- understood that his poem had come up short. If it were disappointing to him, would it not be disappointing to the President, indeed to all? As he stood at the lectern to read his poem, Dedication, a strong gust of wind came along and the old man purposefully loosened his grip, releasing the newly composed poem to the wind. After which, from memory, he recited the poem recorded in history, The Gift Outright, a poem that was written in the 1930s and published in 1942.

I do not know whether this account of events is true or not. I suspect it is not. But who, upon hearing it, would prefer the truth instead?

Robert Lee Frost died on January 29, 1963 in Boston, Massachusetts. He was buried with his wife Elinor -- his co-valedictorian high school sweetheart, who passed away in 1938 -- and other family members. He rests in Bennington, Vermont in the Old Bennington Cemetery. Frost's gravestone bares the inscription, “I had a lover's quarrel with the world.”

A Boundless Moment
A Brook in the City
Acquainted with the Night
A Dream Pang
After Apple Picking
A Girl's Garden
A Hundred Collars
A Late Walk
A Line-storm Song
A Minor Bird
An Encounter
An Old Man's Winter Night
A Patch of Old Snow
A Prayer in Spring
A Question
A Servant to Servants
Asking for Roses
A Star in a Stone-boat
A Time to Talk
Bereft
Birches
Blueberries
Blue-Butterfly Day
Bond and Free
Brown's Descent
Carpe Diem
Christmas Trees
Dedication
Design
Devotion
Dust of Snow
Evening In A Sugar Orchard
Fire and Ice
Flower-Gathering
For Once, Then, Something
Fragmentary Blue
Ghost House
God's Garden
Going for Water
Good-bye, and Keep Cold
Good Hours
Home Burial
Hyla Brook
In a Vale
In Equal Sacrifice
In Neglect
In the Home Stretch
Into My Own
Iris By Night
Love and a Question
Maple
Meeting And Passing
Mending Wall
Mowing
My Butterfly
My November Guest
Neither Out Far Nor In Deep
Never Again Would Bird's Song Be the Same
New Hampshire
Nothing Gold Can Stay
Not To Keep
Now Close the Windows
October
“Out, Out––”
Pan with Us
Pea Brush
Putting in the Seed
Range-Finding
Reluctance
Revelation
Rose Pogonias
Snow
Spoils of the Dead
Stars
Stopping by Woods on a Snowy Evening
Storm Fear
The Ax-helve
The Black Cottage
The Bonfire
The Census-taker
The Code
The Cow in Apple Time
The Death of the Hired Man
The Demiurge's Laugh
The Exposed Nest
The Fear
The Generations of Men
The Gift Outright
The Grindstone
The Gum-Gatherer
The Hill Wife
The Housekeeper
The Line-Gang
The Lockless Door
The Mountain
The Oven Bird
The Pasture
The Road Not Taken
The Rose Family
The Self-seeker
The Sound of Trees
The Span Of Life
The Star-splitter
The Telephone
The Trial by Existence
The Tuft Of Flowers
The Vanishing Red
The Vantage Point
The Witch of Coos
The Wood-pile
To the Thawing Wind
Waiting Afield at Dusk
Wild Grapes
Wind and Window Flower