The Sing-Song of Old Man Kangaroo

Rudyard Kipling's Just So Stories (1902) offer young readers the opportunity to identify literary devices like anthropomorphism and explore the characteristics of what makes a "tall tale" believable.

NOT always was the Kangaroo as now we do behold him, but a Different Animal with four short legs. He was grey and he was woolly, and his pride was inordinate: he danced on an outcrop in the middle of Australia, and he went to the Little God Nqa.

He went to Nqa at six before breakfast, saying, 'Make me different from all other animals by five this afternoon.'

Up jumped Nqa from his seat on the sandflat and shouted, 'Go away!'

He was grey and he was woolly, and his pride was inordinate: he danced on a rock-ledge in the middle of Australia, and he went to the Middle God Nquing.

He went to Nquing at eight after breakfast, saying, ' Make me different from all other animals; make me, also, wonderfully popular by five this afternoon.'

Up jumped Nquing from his burrow in the spinifex and shouted, 'Go away!'

He was grey and he was woolly, and his pride was inordinate: he danced on a sandbank in the middle of Australia, and he went to the Big God Nqong.

He went to Nqong at ten before dinner-time, saying, 'Make me different from all other animals; make me popular and wonderfully run after by five this afternoon.'

Up jumped Nqong from his bath in the salt-pan and shouted, 'Yes, I will!'

Nqong called Dingo--Yellow-Dog Dingo--always hungry, dusty in the sunshine, and showed him Kangaroo. Nqong said, 'Dingo! Wake up, Dingo! Do you see that gentleman dancing on an ashpit? He wants to be popular and very truly run after. Dingo, make him SO!'

Off went the proud Kangaroo on his four little legs like a bunny.

This, O Beloved of mine, ends the first part of the tale!

Still ran Dingo--Yellow-Dog Dingo--hungrier and hungrier, grinning like a horse-collar, never getting nearer, never getting farther; and they came to the Wollgong River.

Still ran Dingo--Yellow-Dog Dingo--very much bewildered, very much hungry, and wondering what in the world or out of it made Old Man Kangaroo hop.

For he hopped like a cricket; like a pea in a saucepan; or a new rubber ball on a nursery floor.

He tucked up his front legs; he hopped on his hind legs; he stuck out his tail for a balance-weight behind him; and he hopped through the Darling Downs. 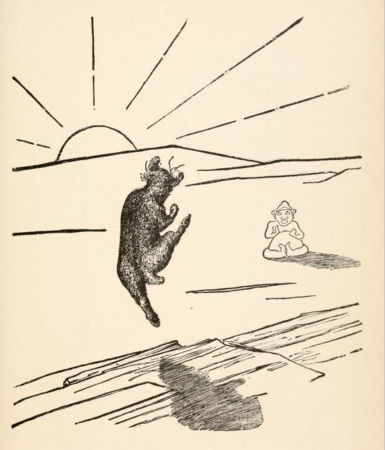 Still ran Dingo--Tired-Dog Dingo--hungrier and hungrier, very much bewildered, and wondering when in the world or out of it would Old Man Kangaroo stop.

Then came Nqong from his bath in the salt-pans, and said, 'It's five o'clock.'

Down sat Dingo--Poor Dog Dingo--always hungry, dusky in the sunshine; hung out his tongue and howled.

Down sat Kangaroo--Old Man Kangaroo--stuck out his tail like a milking-stool behind him, and said, 'Thank goodness that's finished!'

Then said Nqong, who is always a gentleman, 'Why aren't you grateful to Yellow-Dog Dingo? Why don't you thank him for all he has done for you?'

Then said Nqong, 'Perhaps I'm mistaken, but didn't you ask me to make you different from all other animals, as well as to make you very truly sought after? And now it is five o'clock.'

'Yes,' said Kangaroo. 'I wish that I hadn't. I thought you would do it by charms and incantations, but this is a practical joke.'

'Joke!' said Nqong from his bath in the blue gums. 'Say that again and I'll whistle up Dingo and run your hind legs off.'

'No,' said the Kangaroo. 'I must apologise. Legs are legs, and you needn't alter 'em so far as I am concerned. I only meant to explain to Your Lordliness that I've had nothing to eat since morning, and I'm very empty indeed.'

'Yes,' said Dingo--Yellow-Dog Dingo,--'I am just in the same situation. I've made him different from all other animals; but what may I have for my tea?'

Then said Nqong from his bath in the salt-pan, 'Come and ask me about it tomorrow, because I'm going to wash.'

So they were left in the middle of Australia, Old Man Kangaroo and Yellow-Dog Dingo, and each said, 'That's your fault.'

THIS is the mouth-filling son,
Of the race that was run by a Boomer,
Run in a single burst--only event of its kind--
Started by big God Nqong from Warrigaborrigarooma,
Old Man Kangaroo first: Yellow-Dog Dingo behind.

Enjoy Kipling's How the Leopard Got His Spots. Many of Kipling's Just So Stories are often read in grades 2-3.
9.7

Add The Sing-Song of Old Man Kangaroo to your library.

Return to the Rudyard Kipling library , or . . . Read the next short story; The Solid Muldoon