.007
A Bank Fraud
A Conference Of The Powers
A Deal in Cotton
A Germ Destroyer
A Matter of Fact
An Error In The Fourth Dimension
An Habitation Enforced
An Unqualified Pilot
A Sahibs' War
As Easy As A.B.C.
A Second-Rate Woman
At Howli Thana
A Trip Across A Continent
At the Pit's Mouth
At Twenty-two
A Walking Delegate
A Wayside Comedy
Baa, Baa, Black Sheep
Below The Mill Dam
Bertran And Bimi
Beyond The Pale
Bitters Neat
Black Jack
"Bread Upon The Waters"
Bubbling Well Road
By Word Of Mouth
Consequences
Cupid's Arrows
Dray Wara Yow Dee
False Dawn
Fatima
Friendly Brook
Garm - A Hostage
Gemini
Georgie Porgie
His Chance In Life
His Majesty The King
His Wedded Wife
How the Alphabet Was Made
How the Camel Got His Hump
How the First Letter Was Written
How the Leopard Got His Spots
How the Rhinoceros Got His Skin
How the Whale Got His Throat
In Error
In Flood Time
In the House of Suddhoo
In The Matter Of A Private
In The Presence
In The Pride Of His Youth
In The Same Boat
Judson And The Empire
Kidnapped
Lispeth
Little Foxes
Little Tobrah
Love-o'-Women
Mary Postgate
Miss Youghal's Sais
Moti Guj--Mutineer
Mrs. Bathurst
My Own True Ghost Story
"My Son's Wife"
My Sunday At Home
Naboth
Namgay Doola
Of Those Called
On Greenhow Hill
Only A Subaltern
On The City Wall
On The Strength Of A Likeness
Pig
Poor Dear Mamma
Private Learoyd's Story
Puzzler
Regulus
Reingelder And The German Flag
Rikki-Tikki-Tavi
Steam Tactics
"Swept And Garnished"
The Amir's Homily
The Army Of A Dream
The Arrest Of Lieutenant Golightly
The Beginning of the Armadillos
The Big Drunk Draf'
The Bisara Of Pooree
The Bold 'Prentice
The Bonds Of Discipline
The Bridge-Builders
The Broken Link Handicapped
The Bronckhorst Divorce-Case
The Brushwood Boy
The Burning of the Sarah Sands
The Butterfly that Stamped
The Captive
The Cat that Walked by Himself
The Children Of The Zodiac
"The City Of Dreadful Night"
The Comprehension Of Private Copper
The Conversion Of Aurelian McGoggin
The Courting Of Dinah Shadd
The Crab that Played with the Sea
The Daughter Of The Regiment
The Devil And The Deep Sea
The Dog Hervey
The Dream Of Duncan Parrenness
The Drums Of The Fore And Aft
The Edge Of The Evening
The Education of Otis Yeere
The Elephant's Child
The Enlightenments of Pagett, M.P.
The Finances Of The Gods
"The Finest Story in The World"
The Garden of Eden
The Gate Of A Hundred Sorrows
The God From The Machine
The Head Of The District
The Hill of Illusion
The Honours Of War
The Horse Marines
The House Surgeon
The Incarnation Of Krishna Mulvaney
"Their Lawful Occasions"
The Judgement of Dungara
The Knights of the Joyous Venture
The Lang men O' Larut
The Limitations Of Pambe Serang
The Lost Legion
The Madness Of Private Ortheris
The Man Who Was
The Man Who Would be King
The Mark Of The Beast
The Mother Hive
The Mutiny Of The Mavericks
The Other Man
The Phantom Rickshaw
The Pit That They Digged
The Rescue Of Pluffles
The Return Of Imray
The Rout Of The White Hussars
The Sending of Dana Da
The Ship That Found Herself
The Sing-Song of Old Man Kangaroo
The Solid Muldoon
The Story Of Muhammad Din
The Strange Ride of Morrowbie Jukes
The Swelling of Jordan
The Taking Of Lungtungpen
The Tents Of Kedar
The Three Musketeers
The Tomb Of His Ancestors
The Track of a Lie
The Valley of the Shadow
The Village That Voted The Earth Was Flat
The Vortex
The Wandering Jew
The Way That He Took
The World Without
The Wreck Of The Visigoth
"They"
Thou Art the Man
Three And An Extra
Through The Fire
Thrown Away
To Be Filed For Reference
To Be Held For Reference
Tod's Amendment
Venus Annodomini
Von Kempelen and his Discovery
Watches Of The Night
Wee Willie Winkie
William The Conqueror
"Wireless"
With any Amazement
Without Benefit Of Clergy
With The Main Guard
With The Night Mail: A Story Of 2000 A.D.
Wressley Of The Foreign Office
Yoked With An Unbeliever

Rudyard Kipling (1865 - 1936) lived an extraordinary life. The English novelist, poet, and short story writer particularly beloved for his Just So Stories, was born in Bombay India on December 30, 1865. Though he spent most of his life outside of India, like his parents he thought of himself as "Anglo Indian." He referred to his early days in India as the days of strong light and darkness[1].

Keeping with custom, Rudyard and his younger sister were returned to England to receive an education when Rudyard was five years old. They were boarded with Captain Pryse Agar Halloway and Mrs. Sarah Halloway, who acted as custodians for British Nationals serving in India. While his sister seemed to be a favorite -- she later married the Halloway's son -- Rudyard was treated harshly at the boarding house. He credited the experience in his autobiography for sparking his literary career,

"If you cross-examine a child of seven or eight on his day’s doings (specially when he wants to go to sleep) he will contradict himself very satisfactorily. If each contradiction be set down as a lie and retailed at breakfast, life is not easy. I have known a certain amount of bullying, but this was calculated torture — religious as well as scientific. Yet it made me give attention to the lies I soon found it necessary to tell: and this, I presume, is the foundation of literary effort". When he was old, and his treatment under the Halloway's was known to his family, his aunt asked why he had not made his suffering known at the time. He recorded: "Children tell little more than animals, for what comes to them they accept as eternally established. Also, badly-treated children have a clear notion of what they are likely to get if they betray the secrets of a prison-house before they are clear of it".

In 1878, Kipling was admitted to United Services College at Westward Ho!, a college that prepared young men for the military. Lacking the financial resources to continue his education it was decided that Rudyard should return to India. He returned in October, 1882 and began writing at the Civil and Military Gazette. By all accounts, including his own, writing for the paper was a labor of love and the young Kipling was often covered in ink from his writings. In 1887 he was transferred to England. But it was during his time in India that he began to write in earnest and in 1888 he published six collections of short stories.

In 1889 he left the paper after a dispute, sold the rights to his short story collections, and used the money to travel the world. That trip took him through America and he met Mark Twain before returning to London. He married Carrie Balestier in 1892. They travelled to America and Japan. Then back to America where they settled from 1892 - 1896. The couple enjoyed many happy years and Kipling wrote The Jungle Book, Captains Courageous and some poetry including Gunga Din.

They returned to England and during the early 1900s the world was treated to a great writer at the peak of career. He was awarded the Nobel Prize in Literature in 1907. He continued to write until the 1930s, dying in 1936 from a perforated ulcer at age 70.

[1]
Considering that Rudyard left India when he was five years old, I wondered how and why the place had made such a deep impression upon him that it remained the primary part of his identity throughout his whole life. The phrase "strong light and darkness" had hovered in my mind for several weeks when I chanced upon a two page photograph by Jody MacDonald in the August 2012 issue of National Geographic Magazine. 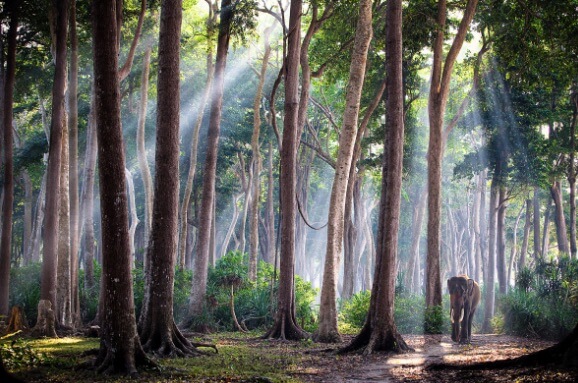 For me, the "Anglo Indian" answer comes home when I combine that photograph with this excerpt from his autobiography, "In the afternoon heats before we took our sleep, she (the Portuguese ayah, or nanny) or Meeta (the Hindu bearer, or male attendant) would tell us stories and Indian nursery songs all unforgotten, and we were sent into the dining-room after we had been dressed, with the caution 'Speak English now to Papa and Mamma.' So one spoke 'English', haltingly translated out of the vernacular idiom that one thought and dreamed in." A young boy, in a land of "strong light and darkness" with dedicted story-tellers . . . the mystery of his identity and the origins of The Jungle Book seem to become more clear.