MY FATHER FINDS THE ISLAND

My father hid in the hold for six days and nights. Twice he was nearly caught when the ship stopped to take on more cargo. But at last he heard a sailor say that the next port would be Cranberry and that they'd be unloading the wheat there. My father knew that the sailors would send him home if they caught him, so he looked in his knapsack and took out a rubber band and the empty grain bag with the label saying "Cranberry." At the last moment my father got inside the bag, knapsack and all, folded the top of the bag inside, and put the rubber band around the top. He didn't look just exactly like the other bags but it was the best he could do. 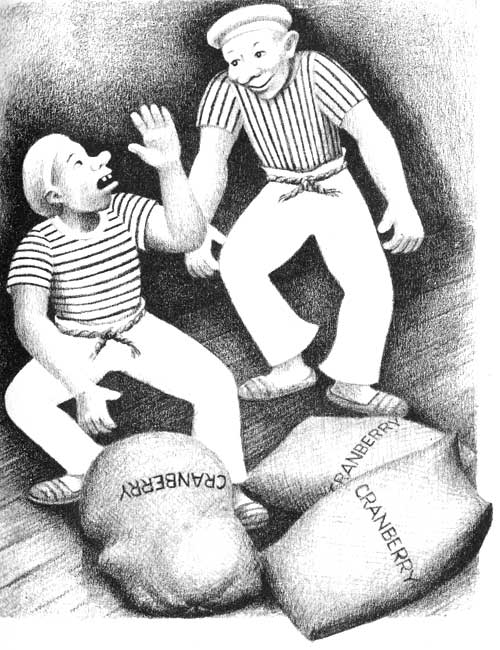 Soon the sailors came to unload. They lowered a big net into the hold and began moving the bags of wheat. Suddenly one sailor yelled, "Great Scott! This is the queerest bag of wheat I've ever seen! It's all lumpy-like, but the label says it's to go to Cranberry."

The other sailors looked at the bag too, and my father, who was in the bag, of course, tried even harder to look like a bag of wheat. Then another sailor felt the bag and he just happened to get hold of my father's elbow. "I know what this is," he said. "This is a bag of dried corn on the cob," and he dumped my father into the big net along with the bags of wheat.

This all happened in the late afternoon, so late that the merchant in Cranberry who had ordered the wheat didn't count his bags until the next morning. (He was a very punctual man, and never late for dinner.) The sailors told the captain, and the captain wrote down on a piece of paper, that they had delivered one hundred and sixty bags of wheat and one bag of dried corn on the cob. They left the piece of paper for the merchant and sailed away that evening.

My father heard later that the merchant spent the whole next day counting and recounting the bags and feeling each one trying to find the bag of dried corn on the cob. He never found it because as soon as it was dark my father climbed out of the bag, folded it up and put it back in his knapsack. He walked along the shore to a nice sandy place and lay down to sleep. 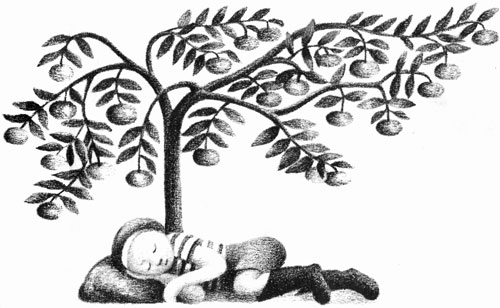 My father was very hungry when he woke up the next morning. Just as he was looking to see if he had anything left to eat, something hit him on the head. It was a tangerine. He had been sleeping right under a tree full of big, fat tangerines. And then he remembered that this was the Island of Tangerina. Tangerine trees grew wild everywhere. My father picked as many as he had room for, which was thirty-one, and started off to find Wild Island.

He walked and walked and walked along the shore, looking for the rocks that joined the two islands. He walked all day, and once when he met a fisherman and asked him about Wild Island, the fisherman began to shake and couldn't talk for a long while. It scared him that much, just thinking about it. Finally he said, "Many people have tried to explore Wild Island, but not one has come back alive. We think they were eaten by the wild animals." This didn't bother my father. He kept walking and slept on the beach again that night.

It was beautifully clear the next day, and way down the shore my father could see a long line of rocks leading out into the ocean, and way, way out at the end he could just see a tiny patch of green. He quickly ate seven tangerines and started down the beach.

It was almost dark when he came to the rocks, but there, way out in the ocean, was the patch of green. He sat down and rested a while, remembering that the cat had said, "If you can, go out to the island at night, because then the wild animals won't see you coming along the rocks and you can hide when you get there." So my father picked seven more tangerines, put on his black rubber boots, and waited for dark.

After a while he began to hear a rumbling noise. It grew louder and louder as he got nearer to the island. At last it seemed as if he was right on top of the noise, and he was. He had jumped from a rock onto the back of a small whale who was fast asleep and cuddled up between two rocks. The whale was snoring and making more noise than a steam shovel, so it never heard my father say, "Oh, I didn't know that was you!" And it never knew my father had jumped on its back by mistake.

For seven hours my father climbed and slipped and leapt from rock to rock, but while it was still dark he finally reached the very last rock and stepped off onto Wild Island. 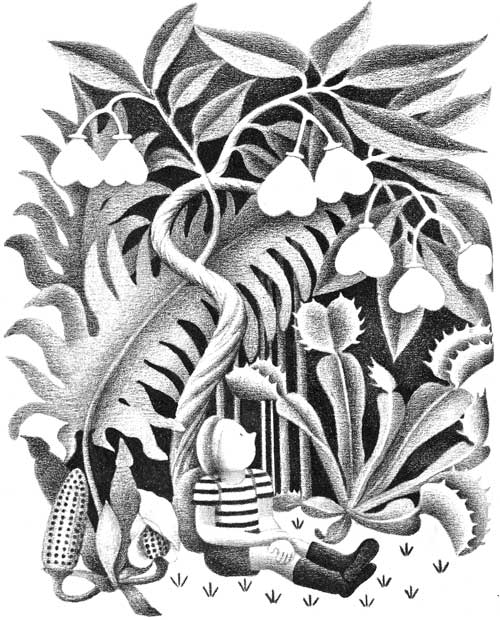