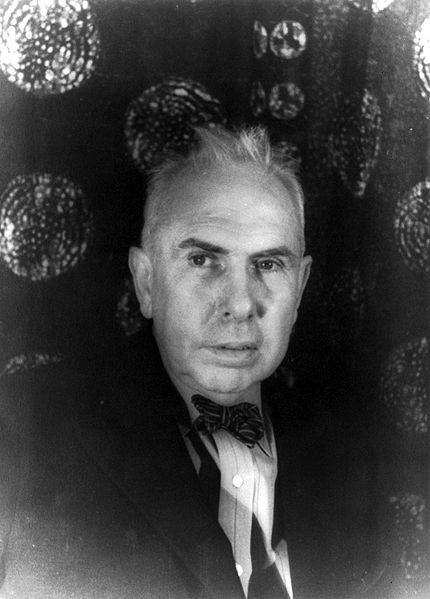 Theodore Dreiser (1871 - 1945) is considered one of the great American novelists from early in the 20th century, along with Edith Wharton, Stephen Crane, and Jack London. He influenced a number of writers, including Sherwood Anderson.

Dreiser holds an interesting footnote in history. As he concluded his first European holiday, the forty year old author wanted to take the Titanic back to America. He was persuaded to take a less expensive ship by an English publisher and booked passage on the liner Kroonland instead of the Titanic. He was at sea aboard the Kroonland when he learned that the Titanic went down. He wrote in his memoir, A Traveler at Forty (1913) the following year:
"To think of a ship as immense as the Titanic, new and bright, sinking in endless fathoms of water. And the two thousand passengers routed like rats from their berths only to float helplessly in miles of water, praying and crying!”

Dreiser published Sister Carrie (1900), the story about a young girl's pursuit of the American dream, from mistress to famous actress. His Trilogy of Desire was based on the life of a Chicago streetcar tycoon, Charles Tyson Yerkes. It comprised of: The Financier (1912), The Titan (1914), and The Stoic (1947). He achieved significant commercial success in 1925 with An American Tragedy. Dreiser also wrote short stories and poems.

H.L. Mencken commented on Dreiser: "Out of the desert of American fictioneering, so populous and yet so dreary, Dreiser stands up—a phenomenon unescapably visible, but disconcertingly hard to explain."

You may enjoy reading H.L. Mencken's critical analysis of the author in A Book of Prefaces, titled Theodore Dreiser.

Sister Carrie
The Financier
The Titan