"The happy countenance of her child did not bring joy to the mother's heart; for she knew that with a word, she must dash to the ground all his buoyant anticipations."

A lady, handsomely dressed, was about leaving her house to make a few calls, when a little boy ran out from the nursery, and clasping one of her gloved hands in both of his, looked up into her face with a glance of winning entreaty, saying, as he did so:

"Mamma! dear mamma! Won't you buy me a picture-book, just like cousin Edie's?" 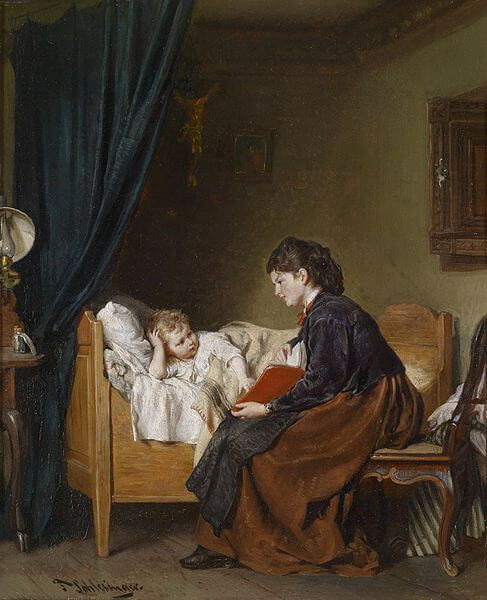 "Yes, love," was the unhesitating reply; and the lady stooped to kiss the sweet lips of her child.

"Eddy must be a good boy, and mind nurse while mamma is away," she added.

"I'll be so good," replied Eddy, with all the earnestness of a childish purpose. "You may ask nurse when you come home, if I have not been the goodest little boy that ever was."

Mrs. Herbert kissed her darling boy again, and then went forth to make her morning round of calls. Eddy returned to the nursery, strong in his purpose, to be a good boy, as he had promised.

"Such a dear little picture-book as mamma is going to bring me home," he said to nurse, as he leaned his arms against her, and looked up into her face. "Oh! won't I be so glad. It's to be just like cousin Edie's. Mamma said so; and cousin Edie's book is so beautiful. I 've wanted one ever since I was there. Is'nt mamma good?"

"Yes, Eddy," replied the nurse, "your mamma is very good; and you should love her so much, and do everything she tells you to do."

"I do love her," said the child. "Oh, I love her more than all the world; and I'm going to mind every thing she says."

Then the child went to his play, and was happy with his toys. But his thoughts were on the picture-book, and pleasantly his young imagination lingered amid its attractive pages.

"Is'nt it 'most time for mother to be home?" he asked, at the end of half an hour, coming to the side of his nurse, and gazing up into her face.

Eddy looked disappointed. But that instant the door bell rung.

"There's mamma!" exclaimed the child, clapping his hands; and before nurse could restrain him, he had bounded from the room, and his little feet were heard pattering down the stairs. Slowly he came back, after a little while, and with a look of disappointment on his sweet young face, entered the nursery, saying, as he did so:

"It was only a man with brooms to sell."

"Your mamma won't be home for a long time yet, Eddy," said his nurse, "so it is of no use for you to expect her. Go and build block houses again."

"I'm tired of block houses," replied the little boy, "and now that mamma has promised me a picture-book like cousin Edie's I can't think of anything else."

"Oh, well," said nurse, a little impatiently, "she'll be home in good time. Try and not think of the book. It won't do any good--it won't bring her home a minute sooner."

"I can't help thinking of it," persisted the child, in whom the imaginative faculty was unusually, strong for one of his age.

In a little while, however, something occurred to interest him, and a full hour elapsed before he again recurred to his mother and the expected picture book. As best she could, his nurse diverted his mind, and kept him, in a measure, occupied with what was around him. At length it was full time for Mrs. Herbert to return. Eddy had ceased to find interest in anything appertaining to the nursery. He went down into the parlor, and seating himself at the window, watched, with childish eagerness, for the form of his mother.

Strange as it may seem to the reader, Mrs. Herbert had scarcely passed into the street, ere her promise was forgotten. Not that she was indifferent to the happiness of her child--not that she was a heartless mother. Far very far from this. Purely and truly did she love this sweet boy. But, so much were her thoughts interested in other things, that she did not, at the time, comprehend the earnestness of his childish wishes; nor think of her promise as a sacred thing. The request for a picture book seemed to her but the expression of a sudden thought, that passed from his mind as soon as uttered. And yet, she had not promised without intending to meet the wishes of her child, for she was an indulgent mother, and rarely said "No," to any request that might reasonably be gratified. She had noticed Cousin Edie's pretty book, and thought that she would, some time or other, get one like it for Eddy. The child's request but seconded this thought. There was will, therefore, in her promise. She meant to do as she had said.

But things of more interest to Mrs. Herbert, than the simple wish of a child, so fully occupied her mind from the time she left her own door, that she never again thought of the book, until she saw Eddy's dear face at the window. It was serious, and slightly impatient, as if he were wearied with watching and waiting; but the moment his eyes rested upon her form, his whole countenance brightened, as though lit up by a sunbeam. Almost as soon as Mrs. Herbert's hand touched the bell, the street door was thrown open, and the glad child stood, like a rebuking spirit, before her.

Now, the first conviction of wrong, often has an irritating effect upon the mind, obscuring its perceptions, and leading, sometimes, to the impulsive commission of greater wrongs. It was so in the present case. The happy countenance of her child did not bring joy to the mother's heart; for she knew that with a word, she must dash to the ground all his buoyant anticipations. And she remembered, too, at the moment, how poorly he could bear disappointment.

"Eddy, dear," said Mrs. Herbert, taking her little boy by the hand, and advancing toward the parlor door with him, "Eddy, dear, let me tell you something."

Her grave tone and look caused a shiver to pass inward toward the heart of the child. He understood, but too well, that the mother, whose word he had trusted so implicitly, had been faithless to her promise.

Poor child! even this advancing shadow of a coming disappointment, darkened his young face and filled his eyes with tears.

Mrs. Herbert sat down on the nearest chair, as she entered the parlor, and drew Eddy to her side. She saw, from his sad face, that words were not required to make him aware that the promised book was not in her possession; and she knew, from former experience, that trouble was before her. Unhappily, she did not feel softened, but rather irritated, toward the child.

"Eddy," she said firmly, yet with as much tenderness as she could assume, "Eddy, you know you promised me to be such a good boy."

"And I have been good," eagerly answered the little fellow, lifting his swimming eyes to her face, "you may ask nurse if I havn't been good all the time."

"I'm sure you have," said Mrs. Herbert, touched by the manner of her child; "and yet, Eddy, I have not brought your book."

The tears, which had been ready to start, now gushed over his face, and a low cry pained the mother's ears.

"Eddy," said she, seriously, "let me tell you about it. You must listen to reason."

Reason! poor, disappointed little one! He had no ear for the comprehension of reasons.

"Now, Eddy! I can't have this!" Mrs. Herbert spoke firmly, for already the child was weeping bitterly. "Crying will do no good. I promised you the book, and you shall have it. I had no opportunity to get it this morning. Come now! you must stop at once, or I----"

Mrs. Herbert did not utter the threat which came to her lips; for her mind shrunk from the thought of punishing her child, especially as his fault was a consequence of her own actions. But, as he continued to cry on, and in a louder voice, she not only began to feel excessively annoyed, but deemed it her duty to compel a cessation of what could do no possible good, but rather harm.

"Eddy, you must stop this crying!" Firmness had changed to sternness.

The words might as well not have been spoken.

"Then you are not going to stop!" The tones were angry now; and, as Mrs. Herbert uttered them, she caught the arm of her child with a tight grip.

At this moment, the sound of the latch-key was heard in the street door. It was dinner time, and Mr. Herbert entered.

"Bless us! what's the trouble here?" the father of Eddy exclaimed, good-naturedly, as he presented himself in the parlor.

"The trouble is," said Mrs. Herbert, in a fretful voice, "that I promised to buy him a book, and forgot all about it."

"Oho! Is that all?" Mr. Herbert spoke cheerfully. "This trouble can soon be healed. Come, dear, and let us see what I can do for you."

And Mr. Herbert drew forth a small, square packet, and began untying the string, with which it was bound. Eddy ceased crying in an instant, while a rainbow light shone through his tears. Soon a book came to view. It was the book. Singularly enough, Mr. Herbert had, that morning, observed it in a store, and thinking it would please his child, had bought it for him.

"Will that do?" he said, handing the book to Eddy.

What a gush of gladness came to the child's face. A moment or two he stood, like one bewildered, and then throwing his arms around his father's neck and hugging him tightly, he said, in the fullness of his heart,

Ere the arms of Eddy were unclasped from his father's neck, Mrs. Herbert had left the room. When, on the ringing of the dinner bell, she joined her husband and child at the table, her countenance wore a sober aspect, and there were signs of tears about her eyes. What her thoughts had been, every true mother can better imagine than we describe. That they were salutary, may be inferred from the fact that no promise, not even the lightest, was ever afterwards made to her child, which was not righteously kept to the very letter.

The Mother's Promise was featured as The Short Story of the Day on Fri, May 11, 2018

You may also enjoy our collection of 50 Great Feel-Good Stories.

Add The Mother's Promise to your library.

Return to the T.S. Arthur library , or . . . Read the next short story; The Portrait