An Adventure with a Frog 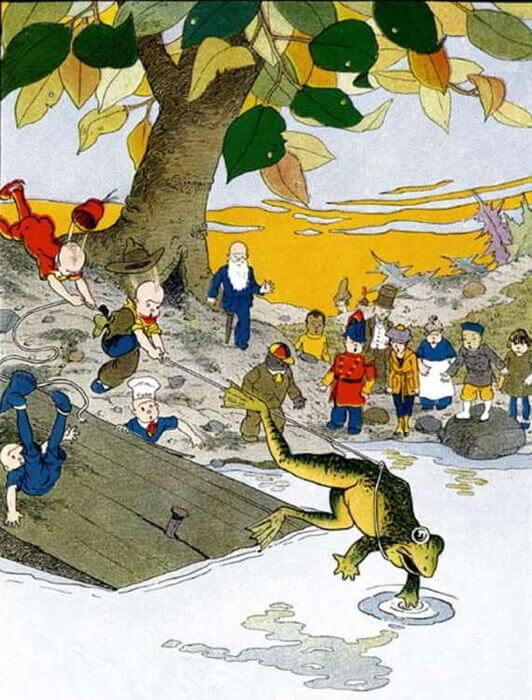 "ALLEE same where Clowboy?” gasped the Chinaman, stopping at the back porch of the shoe house, were the Cook sat slicing a grape for lunch.

“I saw him a while ago talking to the Indian,” answered the Cook. “They were sitting under that big mushroom on the other side of the house.”

“Thankee,” and the Chinaman hurried around the corner of the house, puffing like a steam engine.

“Oh there you are,” he cried, as he spied the Indian and the Cowboy, lying in the shade of the mushroom. “Allee same me gottee much to tell.”

“Well what is it, Chink?” asked the Cowboy.

“You mean a big bullfrog,” corrected the Cowboy.

“Yes, yes—a bulltoad—bullflog,” cried the excited Chinaman. “Him sleep on log at pond. Him snore like everythings. You come and throw lasso over his head and we catchee him.”

“You round up the fellows and I’ll get my rope,” cried the Cowboy, smacking his lips over the thought of delicious baked frog ham.

In a few minutes the Teenie Weenies were on their way towards the pond, which lay back of the woods near the shoe house.

“S-s-sh,” warned the Indian, as the little people hurried up to the edge of the pond. “Frog him sleep; don’t wake.”

The Teenie Weenies sneaked along carefully until they stood quite near the log on which the sleeping frog sat. He was a big green fellow and the Teenie Weenies scarcely breathed for fear they would awaken the frog, and lose him.

Several of the strongest Teenie Weenies held the end of the rope while the Cowboy crawled silently onto the log.

“Now when I drop the noose over the frog’s head,” whispered the Cowboy, “you fellows jerk the rope and hold on for dear life.”

The Cowboy slipped quietly up behind the frog and cleverly tossed the rope over the big fellow’s head.

Awakened by the rope falling about his neck, the frog gave a mighty leap towards the water. He was a powerful fellow, and went into the water with a great splash, pulling several of the Teenie Weenies with him.

As the frog disappeared beneath the water the Teenie Weenies swam for shore, where they were pulled up onto the bank by their friends, all sputtering, all soaked to the skin, but unhurt.

When the Teenie Weenies discovered that none of the little folks had been hurt by the ducking, they laughed until the tears ran down their teenie weenie faces.

“Ho, ho, ho!” roared the Poet, as he rolled over on the ground with laughter, “I haven’t seen anything so funny as this for a long time.”

“It’s almost as funny as the time the Dunce fell into the dish of apple sauce,” giggled the Lady of Fashion.

“Goodee gracious!” exclaimed the Chinaman, who had been looking on with wide opened eyes, “allee same me didn’t know that bull clow—I mean bullflog—him so strong.”

“Strong!” cried the Doctor, “I should say they are strong. Why a frog has wonderfully powerful legs. He could kick a Teenie Weenie over an ice cream bucket with one blow of his hind leg.”

“I wouldn’t mind if one kicked me INTO an ice cream freezer,” grinned the Dunce, who was fond of ice cream.

“That ’ol frog reminds me of an old song,” said Gogo and as the Teenie Weenies walked back towards the shoe house the little colored chap sang this quaint little song: