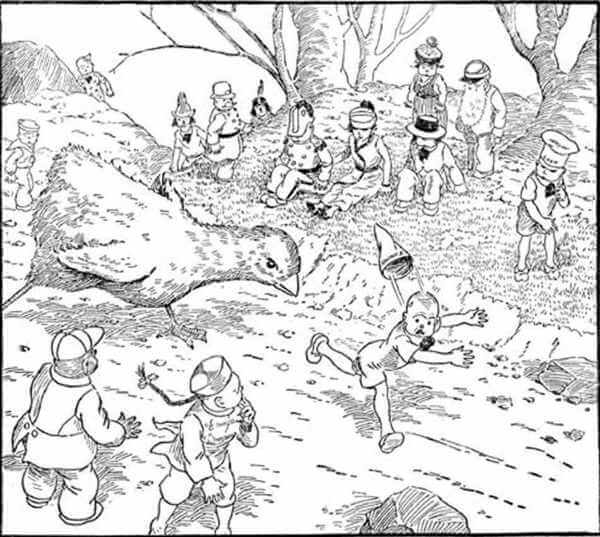 THE Dunce teased the Chinaman a great deal after his experience with the pinching-bug, but the little fellow took it in good humor.

“All right Chink,” laughed the Dunce, “if I ever get a pinchin’-bug on my shirt tail you can laugh yourself sore.”

The Chinaman’s chance came sooner than he expected. Every Sunday afternoon the Teenie Weenies took a long walk, for it was healthful to walk in the fresh air, and besides it made them hungry for the fine dinner which the Cook always prepared.

“Where’s the Dunce?” asked the General, as he sat down beside the Lady of Fashion.

“I haven’t seen him since we left the old hen,” answered the little lady.

“He’s back there teasing those chickens,” announced Gogo. “I told him he’d better look out, or the first thing he knew he’d get a powerful good peckin’, for one of them fuzzy chickens looked mighty mad, that’s what she did.”

“It would just serve him right,” laughed the General. “And maybe it would teach him a lesson—”

“H-e-l-p! H-e-l-p!” came a voice from over a bank of earth, and suddenly the Dunce dashed into view followed by a very angry young chicken. The frightened Dunce was covering the ground in great leaps, and just as he ran into the midst of the startled Teenie Weenies the chicken overtook him.

“There, you little rascal!” shouted the chicken, giving the Dunce a peck with her beak which sent the little chap sprawling in the dirt.

“What’s the trouble?” asked the General, jumping to his feet.

“He was callin’ me ‘fuzzy-wuzzy’ and throwing things at me—that’s what he was,” said the chicken, “and I stood it just as long as I could and I chased him, that’s what I did, and I’ll do it again, too, if he ever teases me again.”

“You did exactly the right thing,” said the General, “and I hope this will be a lesson to him.”

“I suppose I shouldn’t have lost my temper, but I couldn’t stand it another minute,” said the chicken as she trotted away in the direction of her home.

“J-J-J-Jimminie C-C-C-Christmas!” exclaimed the Dunce, “but that fool chicken gave me an awful wallop.”

That night there was a big black and blue spot on the Dunce’s back and the Doctor had to rub it with salve, but it really did the foolish fellow a lot of good, for he has done no teasing since.