The Rain Came Down by the Thimblefull 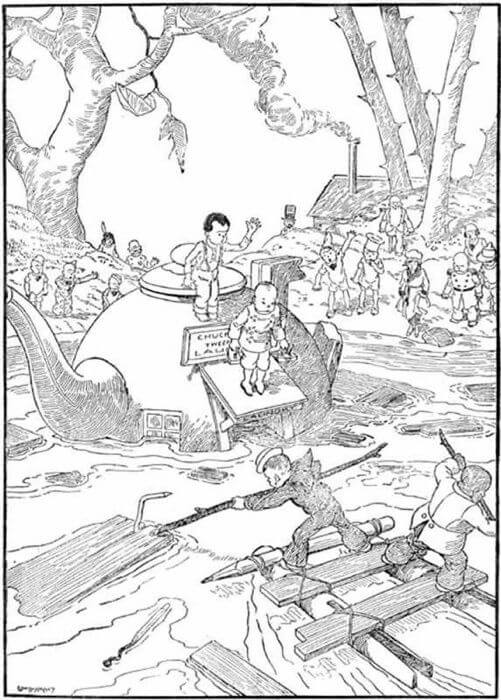 WHEN Zip, the little wild man, came to live with the Teenie Weenies there wasn’t a bit of room left in the old shoe house, so the kind hearted Chinaman took the little chap into his tea pot laundry. There was plenty of room in the old tea pot, so here the two little fellows lived in great comfort and Zip paid for his board by helping the Chinaman launder the Teenie Weenie clothes.

Zip and the Chinaman had eaten a great deal of the easter egg and being tired and sleepy they had retired quite early. While the little chaps lay dreaming in their tiny beds, a great storm came up and the big rain drops came down by the thimbleful. The little men were awakened by the roar of the rain drops splashing on the roof, but they merely turned over in their beds and went to sleep again, for why should they worry about the storm when they were sheltered in a strong tea pot?

Presently the Chinaman was awakened by a queer bouncing of his bed, and to his great astonishment he found that he was floating about the room. The frightened Chinaman sat straight up, and as he did so he lost his balance and tumbled kersplash into the water. He quickly jumped to his feet and found that the water was just up to his waist. Next he groped about the room for some Teenie Weenie matches and in a few minutes he lit a tiny candle.

A wonderful sight met the little fellow’s eyes, for all about the room chairs, tables, and things floated in great confusion. Zip lay snoring on his bed, which floated about, and the Chinaman had to shake him hard before he could be awakened.

Poor Zip was scared half out of his wits when he looked about the room and it didn’t take the two Teenie Weenies long to grab a few clothes and scramble up onto the roof, for the water was almost up to their necks and was rising fast. The rain had stopped, but it was pitch dark, so the little fellows could do nothing but put on their clothes and wait for daylight.

The rest of the Teenie Weenie houses were not injured by the heavy rain, for they stood on the high ground and the water ran off down the hill into the little hollow in which the tea pot stood. The laundry was entirely surrounded by water, which was fully fourteen Teenie Weenie feet deep, and as neither of the little men dared swim among the floating sticks, they were forced to wait until help arrived.

“J-J-J-Jimminie fish hooks!” exclaimed the Dunce, who was much excited over the rescue. “When I-I-Ig-g-go to bed to-night I’m goin’ to take a c-c-c-cork with me for a life preserver.”

“Allee same me savee irons,” cried the Chinaman, who had brought two of his flat irons through the flood.

“It’s a mighty good thing you held onto those irons,” laughed the Clown. “They might have floated away.”

The ground around the laundry was a sight when the water finally settled, for the Teenie Weenie wood pile was quite near and pencils, matches, and many sticks lay scattered all over the ground.

The Teenie Weenies carried eight thimblefuls of mud out of the tea pot and in a short time the little folks had the laundry as clean as a billiard ball, for every one of the little people helped with all his might.