John Quincy Adams and the Right of Petition 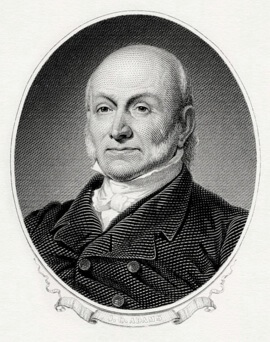 This biography of John Quincy Adams was excerpted from Hero Tales from American History, co-authored by Henry Cabot Lodge, and Theodore Roosevelt in 1895. Visit American History for other interesting figures and their writings which helped shape the country.

The lot of ex-Presidents of the United States, as a rule, has been a life of extreme retirement, but to this rule there is one marked exception. When John Quincy Adams left the White House in March, 1829, it must have seemed as if public life could hold nothing more for him. He had had everything apparently that an American statesman could hope for. He had been Minister to Holland and Prussia, to Russia and England. He had been a Senator of the United States, Secretary of State for eight years, and finally President. Yet, notwithstanding all this, the greatest part of his career, and his noblest service to his country, were still before him when he gave up the Presidency.

In the following year (1830) he was told that he might be elected to the House of Representatives, and the gentleman who made the proposition ventured to say that he thought an ex-President, by taking such a position, "instead of degrading the individual would elevate the representative character." Mr. Adams replied that he had "in that respect no scruples whatever. No person can be degraded by serving the people as Representative in Congress, nor, in my opinion, would an ex-President of the United States be degraded by serving as a selectman of his town if elected thereto by the people." A few weeks later he was chosen to the House, and the district continued to send him every two years from that time until his death. He did much excellent work in the House, and was conspicuous in more than one memorable scene; but here it is possible to touch on only a single point, where he came forward as the champion of a great principle, and fought a battle for the right which will always be remembered among the great deeds of American public men.

Soon after Mr. Adams took his seat in Congress, the movement for the abolition of slavery was begun by a few obscure agitators. It did not at first attract much attention, but as it went on it gradually exasperated the overbearing temper of the Southern slaveholders. One fruit of this agitation was the appearance of petitions for the abolition of slavery in the House of Representatives. A few were presented by Mr. Adams without attracting much notice; but as the petitions multiplied, the Southern representatives became aroused. They assailed Mr. Adams for presenting them, and finally passed what was known as the gag rule, which prevented the reception of these petitions by the House. Against this rule Mr. Adams protested, in the midst of the loud shouts of the Southerners, as a violation of his constitutional rights. But the tyranny of slavery at that time was so complete that the rule was adopted and enforced, and the slaveholders, undertook in this way to suppress free speech in the House, just as they also undertook to prevent the transmission through the mails of any writings adverse to slavery. With the wisdom of a statesman and a man of affairs, Mr. Adams addressed himself to the one practical point of the contest. He did not enter upon a discussion of slavery or of its abolition, but turned his whole force toward the vindication of the right of petition. On every petition day he would offer, in constantly increasing numbers, petitions which came to him from all parts of the country for the abolition of slavery, in this way driving the Southern representatives almost to madness, despite their rule which prevented the reception of such documents when offered. Their hatred of Mr. Adams is something difficult to conceive, and they were burning to break him down, and, if possible, drive him from the House. On February 6, 1837, after presenting the usual petitions, Mr. Adams offered one upon which he said he should like the judgment of the Speaker as to its propriety, inasmuch as it was a petition from slaves. In a moment the House was in a tumult, and loud cries of "Expel him!" "Expel him!" rose in all directions. One resolution after another was offered looking toward his expulsion or censure, and it was not until February 9, three days later, that he was able to take the floor in his own defense. His speech was a masterpiece of argument, invective, and sarcasm. He showed, among other things, that he had not offered the petition, but had only asked the opinion of the Speaker upon it, and that the petition itself prayed that slavery should not be abolished. When he closed his speech, which was quite as savage as any made against him, and infinitely abler, no one desired to reply, and the idea of censuring him was dropped.

The greatest struggle, however, came five years later, when, on January 21, 1842, Mr. Adams presented the petition of certain citizens of Haverhill, Massachusetts, praying for the dissolution of the Union on account of slavery. His enemies felt that now, at last, he had delivered himself into their hands. Again arose the cry for his expulsion, and again vituperation was poured out upon him, and resolutions to expel him freely introduced. When he got the floor to speak in his own defense, he faced an excited House, almost unanimously hostile to him, and possessing, as he well knew, both the will and the power to drive him from its walls. But there was no wavering in Mr. Adams. "If they say they will try me," he said, "they must try me. If they say they will punish me, they must punish me. But if they say that in peace and mercy they will spare me expulsion, I disdain and cast away their mercy, and I ask if they will come to such a trial and expel me. I defy them. I have constituents to go to, and they will have something to say if this House expels me, nor will it be long before the gentlemen will see me here again." The fight went on for nearly a fortnight, and on February 7 the whole subject was finally laid on the table. The sturdy, dogged fighter, single-handed and alone, had beaten all the forces of the South and of slavery. No more memorable fight has ever been made by one man in a parliamentary body, and after this decisive struggle the tide began to turn. Every year Mr. Adams renewed his motion to strike out the gag rule, and forced it to a vote. Gradually the majority against it dwindled, until at last, on December 3, 1844, his motion prevailed. Freedom of speech had been vindicated in the American House of Representatives, the right of petition had been won, and the first great blow against the slave power had been struck.

Four years later Mr. Adams fell, stricken with paralysis, at his place in the House, and a few hours afterward, with the words, "This is the last of earth; I am content," upon his lips, he sank into unconsciousness and died. It was a fit end to a great public career. His fight for the right of petition is one to be studied and remembered, and Mr. Adams made it practically alone. The slaveholders of the South and the representatives of the North were alike against him. Against him, too, as his biographer, Mr. Morse, says, was the class in Boston to which he naturally belonged by birth and education. He had to encounter the bitter resistance in his own set of the "conscienceless respectability of wealth," but the great body of the New England people were with him, as were the voters of his own district. He was an old man, with the physical infirmities of age. His eyes were weak and streaming; his hands were trembling; his voice cracked in moments of excitement; yet in that age of oratory, in the days of Webster and Clay, he was known as the "old man eloquent." It was what he said, more than the way he said it, which told. His vigorous mind never worked more surely and clearly than when he stood alone in the midst of an angry House, the target of their hatred and abuse. His arguments were strong, and his large knowledge and wide experience supplied him with every weapon for defense and attack. Beneath the lash of his invective and his sarcasm the hottest of the slaveholders cowered away. He set his back against a great principle. He never retreated an inch, he never yielded, he never conciliated, he was always an assailant, and no man and no body of men had the power to turn him. He had his dark hours, he felt bitterly the isolation of his position, but he never swerved. He had good right to set down in his diary, when the gag rule was repealed, "Blessed, forever blessed, be the name of God."