The Cruise of the "Wasp" 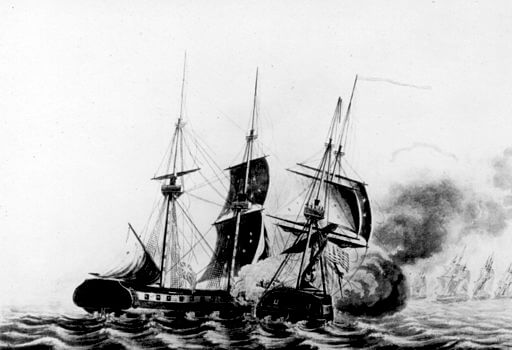 This story about the War of 1812 and the small American naval fleet was excerpted from Hero Tales from American History, co-authored by Henry Cabot Lodge, and Theodore Roosevelt in 1895.

In the war of 1812 the little American navy, including only a dozen frigates and sloops of war, won a series of victories against the English, the hitherto undoubted masters of the sea, that attracted an attention altogether out of proportion to the force of the combatants or the actual damage done. For one hundred and fifty years the English ships of war had failed to find fit rivals in those of any other European power, although they had been matched against each in turn; and when the unknown navy of the new nation growing up across the Atlantic did what no European navy had ever been able to do, not only the English and Americans, but the people of Continental Europe as well, regarded the feat as important out of all proportion to the material aspects of the case. The Americans first proved that the English could be beaten at their own game on the sea. They did what the huge fleets of France, Spain, and Holland had failed to do, and the great modern writers on naval warfare in Continental Europe—men like Jurien de la Graviere—have paid the same attention to these contests of frigates and sloops that they give to whole fleet actions of other wars.

Among the famous ships of the Americans in this war were two named the Wasp. The first was an eighteen-gun ship-sloop, which at the very outset of the war captured a British brig-sloop of twenty guns, after an engagement in which the British fought with great gallantry, but were knocked to Pieces, while the Americans escaped comparatively unscathed. Immediately afterward a British seventy-four captured the victor. In memory of her the Americans gave the same name to one of the new sloops they were building. These sloops were stoutly made, speedy vessels which in strength and swiftness compared favorably with any ships of their class in any other navy of the day, for the American shipwrights were already as famous as the American gunners and seamen. The new Wasp, like her sister ships, carried twenty-two guns and a crew of one hundred and seventy men, and was ship-rigged. Twenty of her guns were 32-pound carronades, while for bow-chasers she had two "long Toms." It was in the year 1814 that the Wasp sailed from the United States to prey on the navy and commerce of Great Britain. Her commander was a gallant South Carolinian named Captain Johnson Blakeley. Her crew were nearly all native Americans, and were an exceptionally fine set of men. Instead of staying near the American coasts or of sailing the high seas, the Wasp at once headed boldly for the English Channel, to carry the war to the very doors of the enemy.

At that time the English fleets had destroyed the navies of every other power of Europe, and had obtained such complete supremacy over the French that the French fleets were kept in port. Off these ports lay the great squadrons of the English ships of the line, never, in gale or in calm, relaxing their watch upon the rival war-ships of the French emperor. So close was the blockade of the French ports, and so hopeless were the French of making headway in battle with their antagonists, that not only the great French three-deckers and two-deckers, but their frigates and sloops as well, lay harmless in their harbors, and the English ships patroled the seas unchecked in every direction. A few French privateers still slipped out now and then, and the far bolder and more formidable American privateersmen drove hither and thither across the ocean in their swift schooners and brigantines, and harried the English commerce without mercy.

The Wasp proceeded at once to cruise in the English Channel and off the coasts of England, France, and Spain. Here the water was traversed continually by English fleets and squadrons and single ships of war, which were sometimes covoying detachments of troops for Wellington's Peninsular army, sometimes guarding fleets of merchant vessels bound homeward, and sometimes merely cruising for foes. It was this spot, right in the teeth of the British naval power, that the Wasp chose for her cruising ground. Hither and thither she sailed through the narrow seas, capturing and destroying the merchantmen, and by the seamanship of her crew and the skill and vigilance of her commander, escaping the pursuit of frigate and ship of the line. Before she had been long on the ground, one June morning, while in chase of a couple of merchant ships, she spied a sloop of war, the British brig Reindeer, of eighteen guns and a hundred and twenty men. The Reindeer was a weaker ship than the Wasp, her guns were lighter, and her men fewer; but her commander, Captain Manners, was one of the most gallant men in the splendid British navy, and he promptly took up the gage of battle which the Wasp threw down.

The day was calm and nearly still; only a light wind stirred across the sea. At one o'clock the Wasp's drum beat to quarters, and the sailors and marines gathered at their appointed posts. The drum of the Reindeer responded to the challenge, and with her sails reduced to fighting trim, her guns run out, and every man ready, she came down upon the Yankee ship. On her forecastle she had rigged a light carronade, and coming up from behind, she five times discharged this pointblank into the American sloop; then in the light air the latter luffed round, firing her guns as they bore, and the two ships engaged yard-arm to yard-arm. The guns leaped and thundered as the grimy gunners hurled them out to fire and back again to load, working like demons. For a few minutes the cannonade was tremendous, and the men in the tops could hardly see the decks for the wreck of flying splinters. Then the vessels ground together, and through the open ports the rival gunners hewed, hacked, and thrust at one another, while the black smoke curled up from between the hulls. The English were suffering terribly. Captain Manners himself was wounded, and realizing that he was doomed to defeat unless by some desperate effort he could avert it, he gave the signal to board. At the call the boarders gathered, naked to the waist, black with powder and spattered with blood, cutlas and pistol in hand. But the Americans were ready. Their marines were drawn up on deck, the pikemen stood behind the bulwarks, and the officers watched, cool and alert, every movement of the foe. Then the British sea-dogs tumbled aboard, only to perish by shot or steel. The combatants slashed and stabbed with savage fury, and the assailants were driven back. Manners sprang to their head to lead them again himself, when a ball fired by one of the sailors in the American tops crashed through his skull, and he fell, sword in hand, with his face to the foe, dying as honorable a death as ever a brave man died in fighting against odds for the flag of his country. As he fell the American officers passed the word to board. With wild cheers the fighting sailormen sprang forward, sweeping the wreck of the British force before them, and in a minute the Reindeer was in their possession. All of her officers, and nearly two thirds of the crew, were killed or wounded; but they had proved themselves as skilful as they were brave, and twenty-six of the Americans had been killed or wounded.