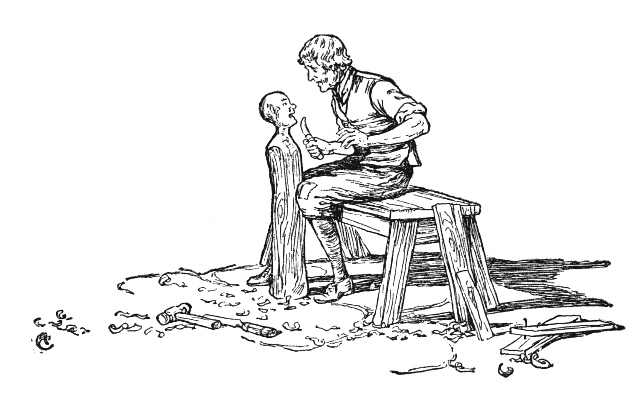 At that moment some one knocked at the door.

"Come in," said the carpenter, without having the strength to rise to his feet.

A lively little old man immediately walked into the shop. His name was Geppetto, but when the boys of the neighborhood wished to make him angry they called him Pudding, because his yellow wig greatly resembled a pudding made of Indian corn.

Geppetto was very fiery. Woe to him who called him Pudding! He became furious and there was no holding him.

"Good-day, Master Antonio," said Geppetto; "what are you doing there on the floor?"

"I am teaching the alphabet to the ants."

"Much good may that do you."

"What has brought you to me, neighbor Geppetto?"

"My legs. But to tell the truth. Master Antonio, I came to ask a favor of you."

"Here I am, ready to serve you," replied the carpenter, getting on his knees.

"This morning an idea came into my head."

"I thought I would make a beautiful wooden puppet; one that could dance, fence, and leap like an acrobat. With this puppet I would travel about the world to earn a piece of bread and a glass of wine. What do you think of it?"

"Bravo, Pudding!" exclaimed the same little voice, and it was impossible to say where it came from.

Hearing himself called Pudding, Geppetto became as red as a turkey-cock from rage and, turning to the carpenter, he said in a fury:

"You called me Pudding!"

"Do you think I called myself Pudding? It was you, I say!"

And, becoming more and more angry, from words they came to blows, and, flying at each other, they bit and fought, and scratched.

When the fight was over Master Antonio was in possession of Geppetto's yellow wig, and Geppetto discovered that the grey wig belonging to the carpenter remained between his teeth.

"Give me back my wig," screamed Master Antonio.

"And you, return me mine, and let us be friends again."

The two old men having each recovered his own wig, shook hands and swore that they would remain friends to the end of their lives.

"Well, then, neighbor Geppetto," said the carpenter, to prove that peace was made, "what is the favor that you wish of me?"

"I want a little wood to make my puppet; will you give me some?"

Master Antonio was delighted, and he immediately went to the bench and fetched the piece of wood that had caused him so much fear. But just as he was going to give it to his friend the piece of wood gave a shake and, wriggling violently out of his hands, struck with all of its force against the dried-up shins of poor Geppetto.

"Ah! is that the courteous way in which you make your presents, Master Antonio? You have almost lamed me!"

"Then you would have it that it was I?"

"The wood is entirely to blame!"

"I know that it was the wood; but it was you that hit my legs with it!"

"Geppetto, don't insult me or I will call you Pudding!"

On hearing himself called Pudding for the third time Geppetto, mad with rage, fell upon the carpenter and they fought desperately.

When the battle was over, Master Antonio had two more scratches on his nose, and his adversary had lost two buttons off his waistcoat. Their accounts being thus squared, they shook hands and swore to remain good friends for the rest of their lives.

Geppetto carried off his fine piece of wood and, thanking Master Antonio, returned limping to his house.