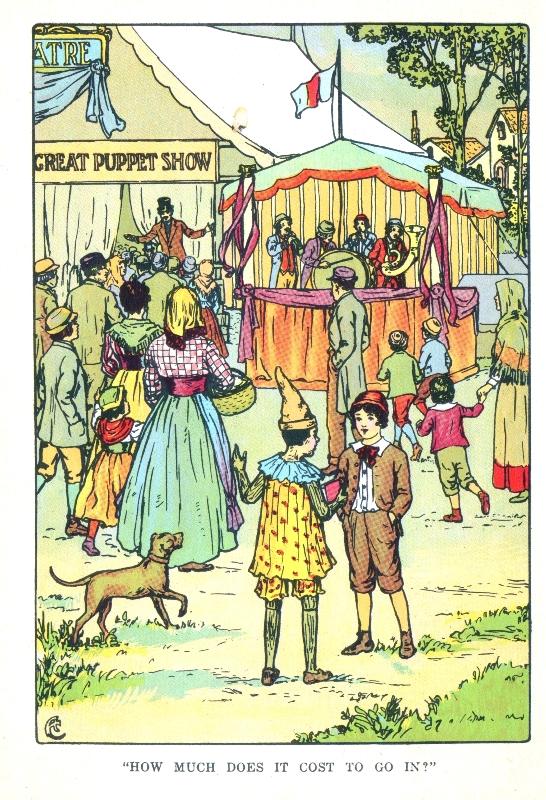 As soon as it stopped snowing Pinocchio set out for school with his fine spelling-book under his arm. As he went along he began to imagine a thousand things in his little brain and to build a thousand castles in the air, one more beautiful than the other.

And, talking to himself, he said:

"Today at school I will learn to read at once; then tomorrow I will begin to write, and the day after tomorrow to figure. Then, with my acquirements, I will earn a great deal of money, and with the first money I have in my pocket I will immediately buy for my papa a beautiful new cloth coat. But what am I saying? Cloth, indeed! It shall be all made of gold and silver, and it shall have diamond buttons. That poor man really deserves it, for to buy me books and have me taught he has remained in his shirt-sleeves. And in this cold! It is only fathers who are capable of such sacrifices!"

Whilst he was saying this with great emotion, he thought that he heard music in the distance that sounded like fifes and the beating of a big drum: Fi-fie-fi, fi-fi-fi; zum, zum, zum.

He stopped and listened. The sounds came from the end of a cross street that led to a little village on the seashore.

"What can that music be? What a pity that I have to go to school, or else—"

And he remained irresolute. It was, however, necessary to come to a decision. Should he go to school? or should he go after the fifes?

"Today I will go and hear the fifes, and tomorrow I will go to school," finally decided the young scapegrace, shrugging his shoulders.

The more he ran the nearer came the sounds of the fifes and the beating of the big drum: Fi-fi-fi; zum, zum, zum, zum.

At last he found himself in the middle of a square quite full of people, who were all crowded round a building made of wood and canvas, and painted a thousand colors.

"What is that building?" asked Pinocchio, turning to a little boy who belonged to the place.

"Read the placard—it is all written—and then you will know."

"I would read it willingly, but it so happens that today I don't know how to read."

"Bravo, blockhead! Then I will read it to you. The writing on that placard in those letters red as fire is:

"Has the play begun long?"

"It is beginning now."

Pinocchio, who was in a fever of curiosity, lost all control of himself, and without any shame he said to the little boy to whom he was talking:

"Would you lend me a dime until tomorrow?"

"I would lend it to you willingly," said the other, "but it so happens that today I cannot give it to you."

"I will sell you my jacket for a dime," the puppet then said to him.

"What do you think that I could do with a jacket of flowered paper? If there were rain and it got wet, it would be impossible to get it off my back."

"Will you buy my shoes?"

"They would only be of use to light the fire."

"How much will you give me for my cap?"

"That would be a wonderful acquisition indeed! A cap of bread crumb! There would be a risk of the mice coming to eat it whilst it was on my head."

Pinocchio was on thorns. He was on the point of making another offer, but he had not the courage. He hesitated, felt irresolute and remorseful. At last he said:

"Will you give me a dime for this new spelling-book?"

"I am a boy and I don't buy from boys," replied his little interlocutor, who had much more sense than he had.

"I will buy the spelling-book for a dime," called out a hawker of old clothes, who had been listening to the conversation.

And the book was sold there and then. And to think that poor Geppetto had remained at home trembling with cold in his shirt-sleeves in order that his son should have a spelling-book.