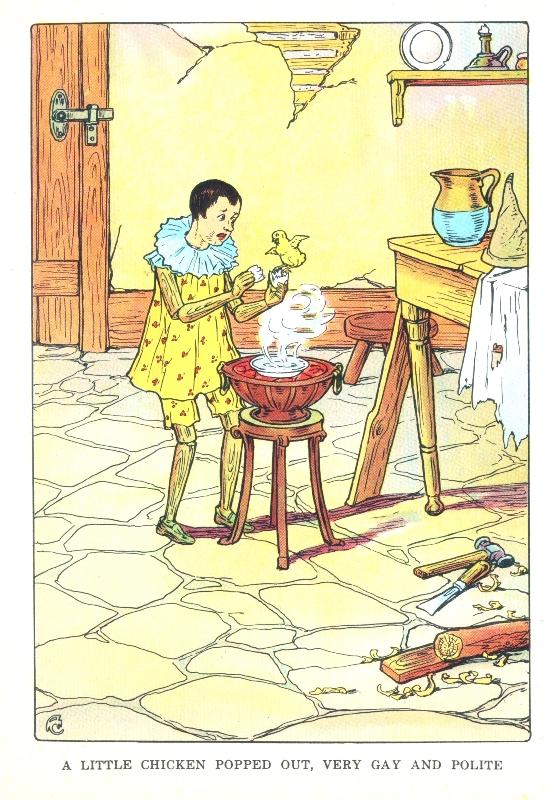 Night was coming on and Pinocchio, remembering that he had eaten nothing all day, began to feel a gnawing in his stomach that very much resembled appetite.

After a few minutes his appetite had become hunger and in no time his hunger became ravenous.

Poor Pinocchio ran quickly to the fireplace, where a saucepan was boiling, and was going to take off the lid to see what was in it, but the saucepan was only painted on the wall. You can imagine his feelings. His nose, which was already long, became longer by at least three inches.

He then began to run about the room, searching in the drawers and in every imaginable place, in hopes of finding a bit of bread. If it was only a bit of dry bread, a crust, a bone left by a dog, a little moldy pudding of Indian corn, a fish bone, a cherry stone—in fact, anything that he could gnaw. But he could find nothing, nothing at all, absolutely nothing.

And in the meanwhile his hunger grew and grew. Poor Pinocchio had no other relief than yawning, and his yawns were so tremendous that sometimes his mouth almost reached his ears. And after he had yawned he spluttered and felt as if he were going to faint.

Then he began to cry desperately, and he said:

"The Talking-Cricket was right. I did wrong to rebel against my papa and to run away from home. If my papa were here I should not now be dying of yawning! Oh! what a dreadful illness hunger is!"

Just then he thought he saw something in the dust-heap—something round and white that looked like a hen's egg. To give a spring and seize hold of it was the affair of a moment. It was indeed an egg.

Pinocchio's joy was beyond description. Almost believing it must be a dream he kept turning the egg over in his hands, feeling it and kissing it. And as he kissed it he said:

Without loss of time he placed an earthenware saucer on a brazier full of red-hot embers. Into the saucer instead of oil or butter he poured a little water; and when the water began to smoke, tac! he broke the egg-shell over it and let the contents drop in. But, instead of the white and the yolk a little chicken popped out very gay and polite. Making a beautiful courtesy it said to him:

"A thousand thanks, Master Pinocchio, for saving me the trouble of breaking the shell. Adieu until we meet again. Keep well, and my best compliments to all at home!"

Thus saying, it spread its wings, darted through the open window and, flying away, was lost to sight.

The poor puppet stood as if he had been bewitched, with his eyes fixed, his mouth open, and the egg-shell in his hand. Recovering, however, from his first stupefaction, he began to cry and scream, and to stamp his feet on the floor in desperation, and amidst his sobs he said:

"Ah, indeed, the Talking-Cricket was right. If I had not run away from home, and if my papa were here, I should not now be dying of hunger! Oh! what a dreadful illness hunger is!"

And, as his stomach cried out more than ever and he did not know how to quiet it, he thought he would leave the house and make an excursion in the neighborhood in hopes of finding some charitable person who would give him a piece of bread.