Chapter VII - Geppetto Gives His Own Breakfast to Pinocchio 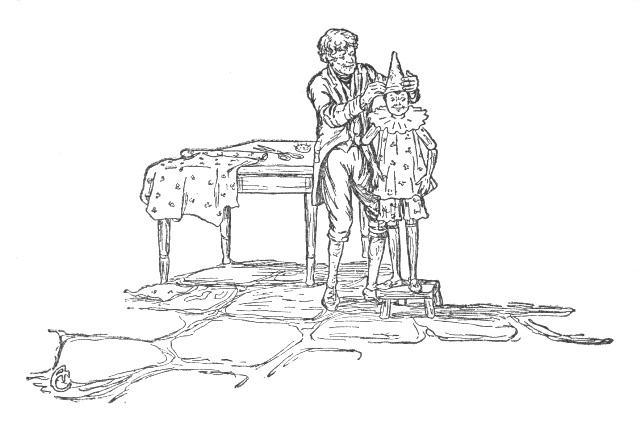 Poor Pinocchio, whose eyes were still half shut from sleep, had not as yet discovered that his feet were burnt off. The moment, therefore, that he heard his father's voice he slipped off his stool to run and open the door; but, after stumbling two or three times, he fell his whole length on the floor.

And the noise he made in falling was as if a sack of wooden ladles had been thrown from a fifth story.

"Open the door!" shouted Geppetto from the street.

"Dear papa, I cannot," answered the puppet, crying and rolling about on the ground.

"Because my feet have been eaten."

"And who has eaten your feet?"

"The cat," said Pinocchio, seeing the cat, who was amusing herself by making some shavings dance with her forepaws.

"Open the door, I tell you!" repeated Geppetto. "If you don't, when I get into the house you shall have the cat from me!"

"I cannot stand up, believe me. Oh, poor me! poor me! I shall have to walk on my knees for the rest of my life!"

Geppetto, believing that all this lamentation was only another of the puppet's tricks, thought of a means of putting an end to it, and, climbing up the wall, he got in at the window.

He was very angry and at first he did nothing but scold; but when he saw his Pinocchio lying on the ground and really without feet he was quite overcome. He took him in his arms and began to kiss and caress him, and to say a thousand endearing things to him, and as the big tears ran down his cheeks he said, sobbing:

"My little Pinocchio! how did you manage to burn your feet?"

"I don't know, papa, but it has been such a dreadful night that I shall remember it as long as I live. It thundered and lightened, and I was very hungry, and then the Talking-Cricket said to me: 'It serves you right; you have been wicked and you deserve it,' and I said to him: 'Take care, Cricket!' and he said: 'You are a puppet and you have a wooden head,' and I threw the handle of a hammer at him, and he died, but the fault was his, for I didn't wish to kill him, and the proof of it is that I put an earthenware saucer on a brazier of burning embers, but a chicken flew out and said: 'Adieu until we meet again, and many compliments to all at home': and I got still more hungry, for which reason that little old man in a night-cap, opening the window, said to me: 'Come underneath and hold out your hat,' and poured a basinful of water on my head, because asking for a little bread isn't a disgrace, is it? and I returned home at once, and because I was always very hungry I put my feet on the brazier to dry them, and then you returned, and I found they were burnt off, and I am always hungry, but I have no longer any feet! Oh! oh! oh! oh!" And poor Pinocchio began to cry and to roar so loudly that he was heard five miles off.

Geppetto, who from all this jumbled account had only understood one thing, which was that the puppet was dying of hunger, drew from his pocket three pears and, giving them to him, said:

"These three pears were intended for my breakfast, but I will give them to you willingly. Eat them, and I hope they will do you good."

"If you wish me to eat them, be kind enough to peel them for me."

"Peel them?" said Geppetto, astonished. "I should never have thought, my boy, that you were so dainty and fastidious. That is bad! In this world we should accustom ourselves from childhood to like and to eat everything, for there is no saying to what we may be brought. There are so many chances!"

"You are no doubt right," interrupted Pinocchio, "but I will never eat fruit that has not been peeled. I cannot bear rind."

So good Geppetto peeled the three pears and put the rind on a corner of the table.

Having eaten the first pear in two mouthfuls, Pinocchio was about to throw away the core, but Geppetto caught hold of his arm and said to him:

"Do not throw it away; in this world everything may be of use."

"But core I am determined I will not eat," shouted the puppet, turning upon him like a viper.

"Who knows! there are so many chances!" repeated Geppetto, without losing his temper.

And so the three cores, instead of being thrown out of the window, were placed on the corner of the table, together with the three rinds.

Having eaten, or rather having devoured the three pears, Pinocchio yawned tremendously, and then said in a fretful tone:

"But, my boy, I have nothing more to give you!"

"I have only the rind and the cores of the three pears."

"One must have patience!" said Pinocchio; "if there is nothing else I will eat a rind."

And he began to chew it. At first he made a wry face, but then one after another he quickly disposed of the rinds: and after the rinds even the cores, and when he had eaten up everything he clapped his hands on his sides in his satisfaction and said joyfully:

"You see, now," observed Geppetto, "that I was right when I said to you that it did not do to accustom ourselves to be too particular or too dainty in our tastes. We can never know, my dear boy, what may happen to us. There are so many chances!"