Chapter XIII - The Inn of the Red Craw-Fish 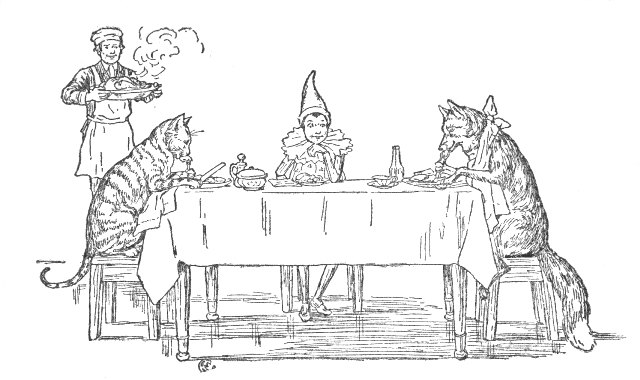 "Let us stop here a little," said the Fox, "that we may have something to eat, and rest ourselves for an hour or two. We will start again at midnight, so as to arrive at the Field of Miracles by dawn tomorrow morning."

Having gone into the inn they all three sat down to table, but none of them had any appetite.

The Cat, who was suffering from indigestion and feeling seriously indisposed, could only eat thirty-five fish with tomato sauce and four portions of tripe with Parmesan cheese; and because she thought the tripe was not seasoned enough, she asked three times for the butter and grated cheese!

The Fox would also willingly have picked a little, but as his doctor had ordered him a strict diet, he was forced to content himself simply with a hare dressed with a sweet and sour sauce, and garnished lightly with fat chickens and early pullets. After the hare he sent for a made dish of partridges, rabbits, frogs, lizards and other delicacies; he could not touch anything else. He cared so little for food, he said, that he could put nothing to his lips.

The one who ate the least was Pinocchio. He asked for some walnuts and a hunch of bread, and left everything on his plate. The poor boy's thoughts were continually fixed on the Field of Miracles.

When they had supped, the Fox said to the host:

"Give us two good rooms, one for Mr. Pinocchio, and the other for me and my companion. We will snatch a little sleep before we leave. Remember, however, that at midnight we wish to be called to continue our journey."

"Yes, gentlemen," answered the host, and he winked at the Fox and the Cat, as much as to say: "I know what you are up to. We understand one another!"

No sooner had Pinocchio got into bed than he fell asleep at once and began to dream. And he dreamed that he was in the middle of a field, and the field was full of shrubs covered with clusters of gold sovereigns, and as they swung in the wind they went zin, zin, zin, almost as if they would say: "Let who will, come and take us." But just as Pinocchio was stretching out his hand to pick handfuls of those beautiful gold pieces and to put them in his pocket, he was suddenly awakened by three violent blows on the door of his room.

It was the host who had come to tell him that midnight had struck.

"Are my companions ready?" asked the puppet.

"Ready! Why, they left two hours ago."

"Why were they in such a hurry?"

"Because the Cat had received a message to say that her eldest kitten was ill with chilblains on his feet and was in danger of death."

"Did they pay for the supper?"

"What are you thinking of? They are too well educated to dream of offering such an insult to a gentleman like you."

"What a pity! It is an insult that would have given me so much pleasure!" said Pinocchio, scratching his head. He then asked:

"And where did my good friends say they would wait for me?"

"At the Field of Miracles, tomorrow morning at daybreak."

Pinocchio paid a sovereign for his supper and that of his companions, and then left.

Outside the inn it was so pitch dark that he had almost to grope his way, for it was impossible to see a hand's breadth in front of him. Some night-birds flying across the road from one hedge to the other brushed Pinocchio's nose with their wings as they passed, which caused him so much terror that, springing back, he shouted: "Who goes there?" and the echo in the surrounding hills repeated in the distance: "Who goes there? Who goes there?"

As he was walking along he saw a little insect shining dimly on the trunk of a tree, like a night-light in a lamp of transparent china.

"Who are you?" asked Pinocchio.

"I am the ghost of the Talking-Cricket," answered the insect in a low voice, so weak and faint that it seemed to come from the other world.

"What do you want with me?" said the puppet.

"I want to give you some advice. Go back and take the four sovereigns that you have left to your poor father, who is weeping and in despair because you have not returned to him."

"By tomorrow my papa will be a gentleman, for these four sovereigns will have become two thousand."

"Don't trust to those who promise to make you rich in a day. Usually they are either mad or rogues! Give ear to me, and go back, my boy."

"On the contrary, I am determined to go on."

"The night is dark!"

"The road is dangerous!"

"Remember that boys who are bent on following their caprices, and will have their own way, sooner or later repent it."

"Good-night, Pinocchio, and may Heaven preserve you from dangers and from assassins."

No sooner had he said these words than the Talking-Cricket vanished suddenly like a light that has been blown out, and the road became darker than ever.