Chapter XVIII - Pinocchio Again Meets the Fox and the Cat 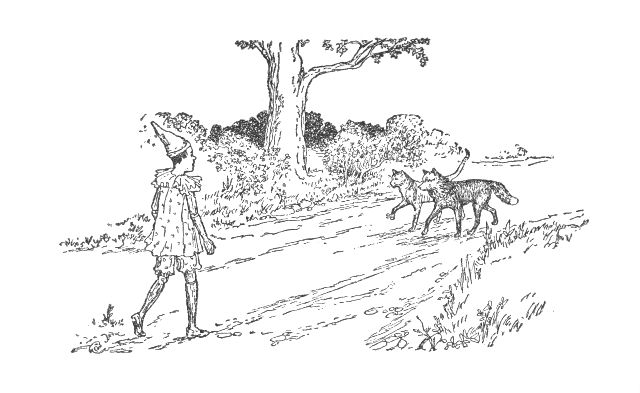 The Fairy allowed the puppet to cry for a good half-hour over his nose, which could no longer pass through the door of the room. This she did to give him a severe lesson, and to correct him of the disgraceful fault of telling lies—the most disgraceful fault that a boy can have. But when she saw him quite disfigured and his eyes swollen out of his head from weeping, she felt full of compassion for him. She therefore beat her hands together and at that signal a thousand large birds called Woodpeckers flew in at the window. They immediately perched on Pinocchio's nose and began to peck at it with such zeal that in a few minutes his enormous and ridiculous nose was reduced to its usual dimensions.

"What a good Fairy you are," said the puppet, drying his eyes, "and how much I love you!"

"I love you also," answered the Fairy; "and if you will remain with me you shall be my little brother and I will be your good little sister."

"I would remain willingly if it were not for my poor papa."

"I have thought of everything. I have already let your father know, and he will be here tonight."

"Really?" shouted Pinocchio, jumping for joy. "Then, little Fairy, if you consent, I should like to go and meet him. I am so anxious to give a kiss to that poor old man, who has suffered so much on my account, that I am counting the minutes."

"Go, then, but be careful not to lose yourself. Take the road through the wood and I am sure that you will meet him."

Pinocchio set out, and as soon as he was in the wood he began to run like a kid. But when he had reached a certain spot, almost in front of the Big Oak, he stopped, because he thought he heard people amongst the bushes. In fact, two persons came out on to the road. Can you guess who they were? His two traveling companions, the Fox and the Cat, with whom he had supped at the inn of The Red Craw-Fish.

"Why, here is our dear Pinocchio!" cried the Fox, kissing and embracing him. "How came you to be here?"

"How come you to be here?" repeated the Cat.

"It is a long story," answered the puppet, "which I will tell you when I have time. But do you know that the other night, when you left me alone at the inn, I met with assassins on the road?"

"Assassins! Oh, poor Pinocchio! And what did they want?"

"They wanted to rob me of my gold pieces."

"But I ran away from them," continued the puppet, "and they followed me, and at last they overtook me and hung me to a branch of that oak tree."

And Pinocchio pointed to the Big Oak, which was two steps from them.

"Is it possible to hear of anything more dreadful?" said the Fox. "In what a world we are condemned to live! Where can respectable people like us find a safe refuge?"

Whilst they were thus talking Pinocchio observed that the Cat was lame of her front right leg, for in fact she had lost her paw with all its claws. He therefore asked her:

"What have you done with your paw?"

The Cat tried to answer, but became confused. Therefore the Fox said immediately:

"My friend is too modest, and that is why she doesn't speak. I will answer for her. I must tell you that an hour ago we met an old wolf on the road, almost fainting from want of food, who asked alms of us. Not having so much as a fish-bone to give him, what did my friend, who has really the heart of a Cæsar, do? She bit off one of her fore paws and threw it to that poor beast that he might appease his hunger."

And the Fox, in relating this, dried a tear.

Pinocchio was also touched and, approaching the Cat, he whispered into her ear:

"If all cats resembled you, how fortunate the mice would be!"

"And now, what are you doing here?" asked the Fox of the puppet.

"I am waiting for my papa, whom I expect to arrive every moment."

"And your gold pieces?"

"I have got them in my pocket, all but one that I spent at the inn of The Red Craw-Fish."

"And to think that, instead of four pieces, by tomorrow they might become one or two thousand! Why do you not listen to my advice? Why will you not go and bury them in the Field of Miracles?"

"Today it is impossible; I will go another day."

"Another day it will be too late!" said the Fox.

"Because the field has been bought by a gentleman and after tomorrow no one will be allowed to bury money there."

"How far off is the Field of Miracles?"

Pinocchio thought of the good Fairy, old Geppetto, and the warnings of the Talking-Cricket, and he hesitated a little before answering. He ended, however, by doing as all boys do who have not a grain of sense and who have no heart—he ended by giving his head a little shake and saying to the Fox and the Cat:

After having walked half the day they reached a town that was called "Trap for Blockheads." As soon as Pinocchio entered this town he saw that the streets were crowded with dogs who were yawning from hunger, shorn sheep trembling with cold, cocks without combs begging for a grain of Indian corn, large butterflies that could no longer fly because they had sold their beautiful colored wings, peacocks which had no tails and were ashamed to be seen, and pheasants that went scratching about in a subdued fashion, mourning for their brilliant gold and silver feathers gone forever.

In the midst of this crowd of beggars and shamefaced creatures some lordly carriage passed from time to time containing a Fox, or a thieving Magpie, or some other ravenous bird of prey.

"And where is the Field of Miracles?" asked Pinocchio.

They crossed the town and, having gone beyond the walls, they came to a solitary field.

"Here we are," said the Fox to the puppet. "Now stoop down and dig with your hands a little hole in the ground and put your gold pieces into it."

Pinocchio obeyed. He dug a hole, put into it the four gold pieces that he had left, and then filled up the hole with a little earth.

"Now, then," said the Fox, "go to that canal close to us, fetch a can of water, and water the ground where you have sowed them."

Pinocchio went to the canal, and, as he had no can, he took off one of his old shoes and filling it with water he watered the ground over the hole.

"Is there anything else to be done?"

"Nothing else," answered the Fox. "We can now go away. You can return in about twenty minutes and you will find a shrub already pushing through the ground, with its branches quite loaded with money."

The poor puppet, beside himself with joy, thanked the Fox and the Cat a thousand times, and promised them a beautiful present.

"We wish for no presents," answered the two rascals. "It is enough for us to have taught you the way to enrich yourself without undergoing hard work, and we are as happy as people out for a holiday."

Thus saying, they took leave of Pinocchio, and, wishing him a good harvest, went about their business.