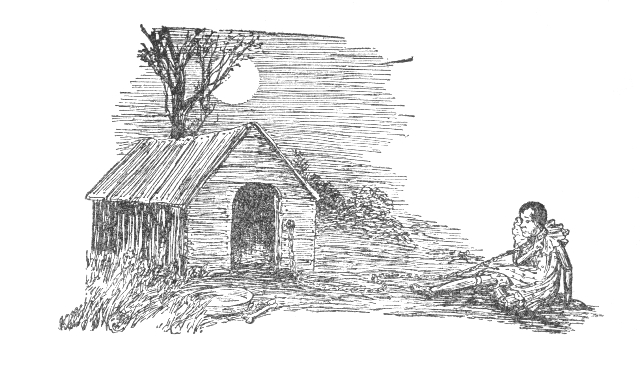 Pinocchio began to cry and scream, but his tears and groans were useless, for there was not a house to be seen, and not a living soul passed down the road.

At last night came on.

Partly from the pain of the trap, that cut his legs, and a little from fear at finding himself alone in the dark in the midst of the fields, the puppet was on the point of fainting. Just at that moment he saw a Firefly flitting over his head. He called to it and said:

"Oh, little Firefly, will you have pity on me and liberate me from this torture?"

"Poor boy!" said the Firefly, stopping and looking at him with compassion; "but how could your legs have been caught by those sharp irons?"

"I came into the field to pick two bunches of these Muscatel grapes, and—"

"But were the grapes yours?"

"Then who taught you to carry off other people's property?"

"Hunger, my boy, is not a good reason for appropriating what does not belong to us."

"That is true, that is true!" said Pinocchio, crying. "I will never do it again."

At this moment their conversation was interrupted by a slight sound of approaching footsteps. It was the owner of the field coming on tiptoe to see if one of the polecats that ate his chickens during the night had been caught in his trap.

His astonishment was great when, having brought out his lantern from under his coat, he perceived that instead of a polecat a boy had been taken.

"Ah, little thief," said the angry peasant, "then it is you who carries off my chickens?"

"No, it is not I; indeed it is not!" cried Pinocchio, sobbing. "I only came into the field to take two bunches of grapes!"

"He who steals grapes is quite capable of stealing chickens. Leave it to me, I will give you a lesson that you will not forget in a hurry."

Opening the trap, he seized the puppet by the collar and carried him to his house as if he had been a young lamb.

When he reached the yard in front of the house he threw him roughly on the ground and, putting his foot on his neck, he said to him:

"It is late and I want to go to bed; we will settle our accounts tomorrow. In the meanwhile, as the dog who kept guard at night died today, you shall take his place at once. You shall be my watch-dog."

And, taking a great collar covered with brass knobs, he strapped it so tightly round his throat that he was not able to draw his head out of it. A heavy chain attached to the collar was fastened to the wall.

"If it should rain tonight," he then said to him, "you can go and lie down in the kennel; the straw that has served as a bed for my poor dog for the last four years is still there. If unfortunately robbers should come, remember to keep your ears pricked and to bark."

After giving him this last injunction the man went into the house, shut the door, and put up the chain.

Poor Pinocchio remained lying on the ground more dead than alive from the effects of cold, hunger and fear. From time to time he put his hands angrily to the collar that tightened his throat and said, crying:

"It serves me right! Decidedly, it serves me right! I was determined to be a vagabond and a good-for-nothing. I would listen to bad companions, and that is why I always meet with misfortunes. If I had been a good little boy, as so many are; if I had remained at home with my poor papa, I should not now be in the midst of the fields and obliged to be the watch-dog to a peasant's house. Oh, if I could be born again! But now it is too late and I must have patience!"

Relieved by this little outburst, which came straight from his heart, he went into the dog-kennel and fell asleep.