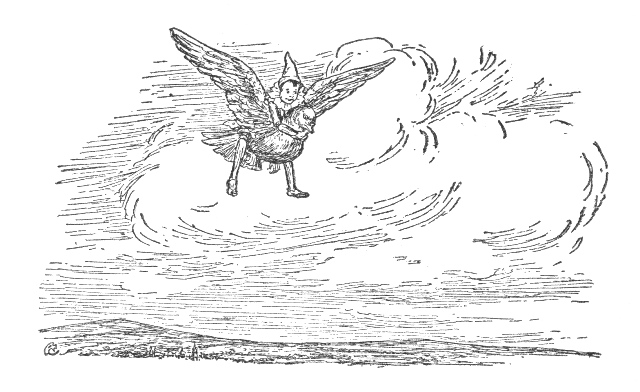 As soon as Pinocchio was released from the heavy and humiliating weight of the dog-collar he started off across the fields and never stopped until he had reached the high road that led to the Fairy's house. He could see amongst the trees the top of the Big Oak to which he had been hung, but, although he looked in every direction, the little house belonging to the beautiful Child with the blue hair was nowhere visible.

Seized with a sad presentiment, he began to run with all the strength he had left and in a few minutes he reached the field where the little white house had once stood. But it was no longer there. Instead of the house he saw a marble stone, on which were engraved these sad words:

I leave you to imagine the puppet's feelings when he had with difficulty spelled out this epitaph. He fell with his face on the ground and, covering the tombstone with a thousand kisses, burst into an agony of tears. He cried all night and when morning came he was still crying, although he had no tears left, and his sobs and lamentations were so acute and heart-breaking that they aroused the echoes in the surrounding hills.

And as he wept he said:

"Oh, little Fairy, why did you die? Why did I not die instead of you, I who am so wicked, whilst you were so good? And my papa? Where can he be? Oh, little Fairy, tell me where I can find him, for I want to remain with him always and never leave him again, never again! Oh, little Fairy, tell me that it is not true that you are dead! If you really love your little brother, come to life again. Does it not grieve you to see me alone and abandoned by everybody? If assassins come they will hang me again to the branch of a tree, and then I should die indeed. What do you imagine that I can do here alone in the world? Now that I have lost you and my papa, who will give me food? Where shall I go to sleep at night? Who will make me a new jacket? Oh, it would be better, a hundred times better, for me to die also! Yes, I want to die—oh! oh! oh!"

And in his despair he tried to tear his hair, but his hair was made of wood so he could not even have the satisfaction of sticking his fingers into it.

Just then a large Pigeon flew over his head and, stopping with distended wings, called down to him from a great height:

"Tell me, child, what are you doing there?"

"Don't you see? I am crying!" said Pinocchio, raising his head towards the voice and rubbing his eyes with his jacket.

"Tell me," continued the Pigeon, "amongst your companions, do you happen to know a puppet who is called Pinocchio?"

"Pinocchio? Did you say Pinocchio?" repeated the puppet, jumping quickly to his feet. "I am Pinocchio!"

At this answer the Pigeon descended rapidly to the ground. He was larger than a turkey.

"Do you also know Geppetto?" he asked.

"I left him three days ago on the seashore."

"What was he doing?"

"He was building a little boat for himself, to cross the ocean. For more than three months that poor man has been going all round the world looking for you. Not having succeeded in finding you, he has now taken it into his head to go to the distant countries of the New World in search of you."

"How far is it from here to the shore?" asked Pinocchio breathlessly.

"Six hundred miles? Oh, beautiful Pigeon, what a fine thing it would be to have your wings!"

"If you wish to go, I will carry you there."

"I weigh next to nothing. I am as light as a feather."

And without waiting for more Pinocchio jumped at once on the Pigeon's back and, putting a leg on each side of him as men do on horseback, he exclaimed joyfully:

"Gallop, gallop, my little horse, for I am anxious to arrive quickly!"

The Pigeon took flight and in a few minutes had soared so high that they almost touched the clouds. Finding himself at such an immense height the puppet had the curiosity to turn and look down; but his head spun round and he became so frightened to save himself from the danger of falling he wound his arms tightly round the neck of his feathered steed.

They flew all day. Towards evening the Pigeon said:

"I am very thirsty!"

"And I am very hungry!" rejoined Pinocchio.

"Let us stop at that dovecote for a few minutes and then we will continue our journey, so that we may reach the seashore by dawn tomorrow."

They went into a deserted dovecote, where they found nothing but a basin full of water and a basket full of vetch.

The puppet had never in his life been able to eat vetch: according to him it made him sick. That evening, however, he ate to repletion, and when he had nearly emptied the basket he turned to the Pigeon and said to him:

"I never could have believed that vetch was so good!"

"Be assured, my boy," replied the Pigeon, "that when hunger is real, and there is nothing else to eat, even vetch becomes delicious. Hunger knows neither caprice nor greediness."

Having quickly finished their little meal they recommenced their journey and flew away. The following morning they reached the seashore.

The Pigeon placed Pinocchio on the ground and, not wishing to be troubled with thanks for having done a good action, flew quickly away and disappeared.

The shore was crowded with people who were looking out to sea, shouting and gesticulating.

"What has happened?" asked Pinocchio of an old woman.

"A poor father who has lost his son has gone away in a boat to search for him on the other side of the water, and today the sea is tempestuous and the little boat is in danger of sinking."

"Where is the little boat?"

"It is out there in a line with my finger," said the old woman, pointing to a little boat which, seen at that distance, looked like a nutshell with a very little man in it.

Pinocchio fixed his eyes on it and after looking attentively he gave a piercing scream, crying:

The boat, meanwhile, beaten by the fury of the waves, at one moment disappeared in the trough of the sea, and the next came again to the surface. Pinocchio, standing on the top of a high rock, kept calling to his father by name, and making every kind of signal to him with his hands, his handkerchief, and his cap.

And, although he was so far off, Geppetto appeared to recognize his son, for he also took off his cap and waved it, and tried by gestures to make him understand that he would have returned if it had been possible, but that the sea was so tempestuous that he could not use his oars or approach the shore.

Suddenly a tremendous wave rose and the boat disappeared. They waited, hoping it would come again to the surface, but it was seen no more.

"Poor man!" said the fishermen who were assembled on the shore; murmuring a prayer, they turned to go home.

Just then they heard a desperate cry and, looking back, they saw a little boy who exclaimed, as he jumped from a rock into the sea:

Pinocchio, being made of wood, floated easily and he swam like a fish. At one moment they saw him disappear under the water, carried down by the fury of the waves, and next he reappeared struggling with a leg or an arm. At last they lost sight of him and he was seen no more.