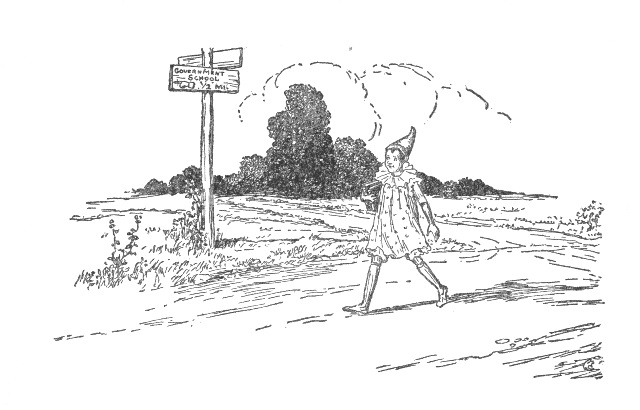 The following day Pinocchio went to the government school. Imagine the delight of all the little rogues, when they saw a puppet walk into their school! They set up a roar of laughter that never ended. They played him all sorts of tricks. One boy carried off his cap, another pulled his jacket behind; one tried to give him a pair of inky mustachios just under his nose, and another attempted to tie strings to his feet and hands to make him dance.

For a short time Pinocchio pretended not to care and got on as well as he could; but at last, losing all patience, he turned to those who were teasing him most and making game of him, and said to them, looking very angry:

"Beware, boys! I have not come here to be your buffoon. I respect others, and I intend to be respected."

"Well said, boaster! You have spoken like a book!" howled the young rascals, convulsed with mad laughter, and one of them, more impertinent than the others, stretched out his hand, intending to seize the puppet by the end of his nose.

But he was not in time, for Pinocchio stuck his leg out from under the table and gave him a great kick on his shins.

"Oh, what hard feet!" roared the boy, rubbing the bruise that the puppet had given him.

"And what elbows! even harder than his feet!" said another, who for his rude tricks had received a blow in the stomach.

But, nevertheless, the kick and the blow acquired at once for Pinocchio the sympathy and the esteem of all the boys in the school. They all made friends with him and liked him heartily.

And even the master praised him, for he found him attentive, studious and intelligent—always the first to come to school, and the last to leave when school was over.

But he had one fault: he made too many friends, and amongst them were several young rascals well known for their dislike to study and love of mischief.

The master warned him every day, and even the good Fairy never failed to tell him and to repeat constantly:

"Take care, Pinocchio! Those bad school-fellows of yours will end sooner or later by making you lose all love of study, and perhaps they may even bring upon you some great misfortune."

"There is no fear of that!" answered the puppet, shrugging his shoulders and touching his forehead as much as to say: "There is so much sense here!"

Now it happened that one fine day, as he was on his way to school, he met several of his usual companions who, coming up to him, asked:

"Have you heard the great news?"

"In the sea near here a Dog-Fish has appeared as big as a mountain."

"Not really? Can it be the same Dog-Fish that was there when my papa was drowned?"

"We are going to the shore to see him. Will you come with us?"

"What matters school? We can go to school tomorrow. Whether we have a lesson more or a lesson less, we shall always remain the same donkeys."

"But what will the master say?"

"The master may say what he likes. He is paid on purpose to grumble all day."

"Do you know what I will do?" said Pinocchio. "I have reasons for wishing to see the Dog-Fish, but I will go and see him when school is over."

"Poor donkey!" exclaimed one of the number. "Do you suppose that a fish of that size will wait your convenience? As soon as he is tired of being here he will start for another place, and then it will be too late."

"How long does it take to go from here to the shore?" asked the puppet.

"We can be there and back in an hour."

"Then away!" shouted Pinocchio, "and he who runs fastest is the best!"

Having thus given the signal to start, the boys, with their books and copy-books under their arms, rushed off across the fields, and Pinocchio was always the first—he seemed to have wings to his feet.

From time to time he turned to jeer at his companions, who were some distance behind, and, seeing them panting for breath, covered with dust, and their tongues hanging out of their mouths, he laughed heartily. The unfortunate boy little knew what terrors and horrible disasters he was going to meet with!