Chapter XXVIII - Pinocchio Escapes Being Fried Like a Fish 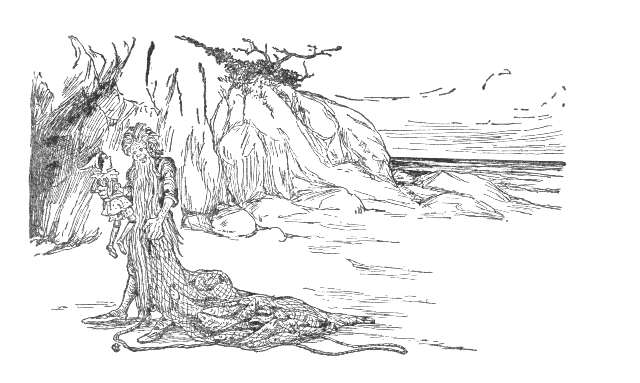 There came a moment in this desperate race—a terrible moment—when Pinocchio thought himself lost: for Alidoro, the mastiff, had run so swiftly that he had nearly come up with him.

The puppet could hear the panting of the dreadful beast close behind him; there was not a hand's breadth between them, he could even feel the dog's hot breath.

Fortunately the shore was close and the sea but a few steps off.

As soon as he reached the sands the puppet made a wonderful leap—a frog could have done no better—and plunged into the water.

Alidoro, on the contrary, wished to stop himself, but, carried away by the impetus of the race, he also went into the sea. The unfortunate dog could not swim, but he made great efforts to keep himself afloat with his paws; but the more he struggled the farther he sank head downwards under the water.

When he rose to the surface again his eyes were rolling with terror, and he barked out:

"Drown!" shouted Pinocchio from a distance, seeing himself safe from all danger.

"Help me, dear Pinocchio! Save me from death!"

At that agonizing cry the puppet, who had in reality an excellent heart, was moved with compassion, and, turning to the dog, he said:

"But if I save your life, will you promise to give me no further annoyance, and not to run after me?"

"I promise! I promise! Be quick, for pity's sake, for if you delay another half-minute I shall be dead."

Pinocchio hesitated; but, remembering that his father had often told him that a good action is never lost, he swam to Alidoro, and, taking hold of his tail with both hands, brought him safe and sound on to the dry sand of the beach.

The poor dog could not stand. He had drunk so much salt water that he was like a balloon. The puppet, however, not wishing to trust him too far, thought it more prudent to jump again into the water. When he had swum some distance from the shore he called out to the friend he had rescued:

"Good-bye, Alidoro; a good journey to you, and take my compliments to all at home."

"Good-bye, Pinocchio," answered the dog; "a thousand thanks for having saved my life. You have done me a great service, and in this world what is given is returned. If an occasion offers I shall not forget it."

Pinocchio swam on, keeping always near the land. At last he thought that he had reached a safe place. Giving a look along the shore, he saw amongst the rocks a kind of cave from which a cloud of smoke was ascending.

"In that cave," he said to himself, "there must be a fire. So much the better. I will go and dry and warm myself, and then? and then we shall see."

Having taken the resolution he approached the rocks, but, as he was going to climb up, he felt something under the water that rose higher and higher and carried him into the air. He tried to escape, but it was too late, for, to his extreme surprise, he found himself enclosed in a great net, together with a swarm of fish of every size and shape, who were flapping and struggling like so many despairing souls.

At the same moment a fisherman came out of the cave; he was so ugly, so horribly ugly, that he looked like a sea monster. Instead of hair his head was covered with a thick bush of green grass, his skin was green, his eyes were green, his long beard that came down to the ground was also green. He had the appearance of an immense lizard standing on its hind-paws.

When the fisherman had drawn his net out of the sea, he exclaimed with great satisfaction:

"Thank Heaven! Again today I shall have a splendid feast of fish!"

"What a mercy that I am not a fish!" said Pinocchio to himself, regaining a little courage.

The netful of fish was carried into the cave, which was dark and smoky. In the middle of the cave a large frying-pan full of oil was frying and sending out a smell of mushrooms that was suffocating.

"Now we will see what fish we have taken!" said the green fisherman, and, putting into the net an enormous hand, so out of all proportion that it looked like a baker's shovel, he pulled out a handful of fish.

"These fish are good!" he said, looking at them and smelling them complacently. And after he had smelled them he threw them into a pan without water.

He repeated the same operation many times, and as he drew out the fish his mouth watered and he said, chuckling to himself:

"These soles are delicious!"

"And these crabs excellent!"

The last to remain in the net was Pinocchio.

No sooner had the fisherman taken him out than he opened his big green eyes with astonishment and cried, half frightened:

"What species of fish is this? Fish of this kind I never remember to have eaten."

And he looked at him again attentively and, having examined him well all over, he ended by saying:

Pinocchio, mortified at being mistaken for a craw-fish, said in an angry voice:

"A craw-fish indeed! Do you take me for a craw-fish? what treatment! Let me tell you that I am a puppet."

"A puppet?" replied the fisherman. "To tell the truth, a puppet is quite a new fish for me. All the better! I shall eat you with greater pleasure."

"Eat me! but will you understand that I am not a fish? Do you hear that I talk and reason as you do?"

"That is quite true," said the fisherman; "and as I see that you are a fish possessed of the talent of talking and reasoning as I do, I will treat you with all the attention that is your due."

"In token of my friendship and particular regard, I will leave you the choice of how you would like to be cooked. Would you like to be fried in the frying-pan, or would you prefer to be stewed with tomato sauce?"

"To tell the truth," answered Pinocchio, "if I am to choose, I should prefer to be set at liberty and to return home."

"You are joking! Do you imagine that I would lose the opportunity of tasting such a rare fish? It is not every day, I assure you, that a puppet fish is caught in these waters. Leave it to me. I will fry you in the frying-pan with the other fish, and you will be quite satisfied. It is always consolation to be fried in company."

At this speech the unhappy Pinocchio began to cry and scream and to implore for mercy, and he said, sobbing: "How much better it would have been if I had gone to school! I would listen to my companions and now I am paying for it."

And he wriggled like an eel and made indescribable efforts to slip out of the clutches of the green fisherman. But it was useless: the fisherman took a long strip of rush and, having bound his hands and feet as if he had been a sausage, he threw him into the pan with the other fish.

He then fetched a wooden bowl full of flour and began to flour them each in turn, and as soon as they were ready he threw them into the frying-pan.

The first to dance in the boiling oil were the poor whitings; the crabs followed, then the sardines, then the soles, then the anchovies, and at last it was Pinocchio's turn. Seeing himself so near death, and such a horrible death, he was so frightened, and trembled so violently, that he had neither voice nor breath left for further entreaties.

But the poor boy implored with his eyes! The green fisherman, however, without caring in the least, plunged him five or six times in the flour, until he was white from head to foot and looked like a puppet made of plaster.