Chapter XXXII - Pinocchio Turns in to a Donkey 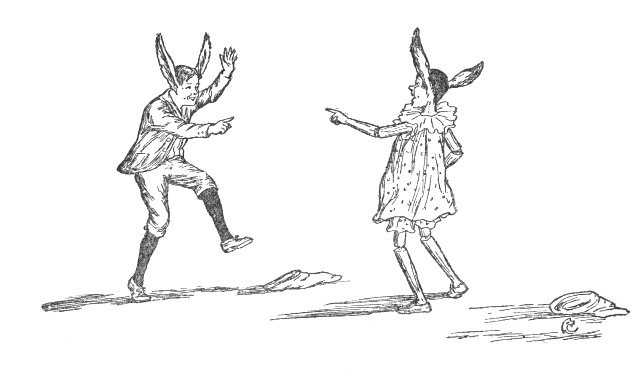 The surprise was that Pinocchio, when he awoke, scratched his head, and in scratching his head he discovered, to his great astonishment, that his ears had grown more than a hand.

You know that the puppet from his birth had always had very small ears—so small that they were not visible to the naked eye. You can imagine then what he felt when he found that during the night his ears had become so long that they seemed like two brooms.

He went at once in search of a glass that he might look at himself, but, not being able to find one, he filled the basin of his washing-stand with water, and he saw reflected what he certainly would never have wished to see. He saw his head embellished with a magnificent pair of donkey's ears!

Only think of poor Pinocchio's sorrow, shame and despair!

He began to cry and roar, and he beat his head against the wall, but the more he cried the longer his ears grew; they grew, and grew, and became hairy towards the points.

At the sound of his loud outcries a beautiful little Marmot that lived on the first floor came into the room. Seeing the puppet in such grief she asked earnestly:

"What has happened to you, my dear fellow-lodger?"

"I am ill, my dear little Marmot, very ill, and my illness frightens me. Do you understand counting a pulse?"

"Then feel and see if by chance I have got fever."

The little Marmot raised her right fore-paw, and, after having felt Pinocchio's pulse, she said to him, sighing:

"My friend, I am grieved to be obliged to give you bad news!"

"You have got a very bad fever!"

"It is donkey fever."

"That is a fever that I do not understand," said the puppet, but he understood it only too well.

"Then I will explain it to you," said the Marmot. "You must know that in two or three hours you will be no longer a puppet, or a boy."

"In two or three hours you will become really and truly a little donkey, like those that draw carts and carry cabbages and salad to market."

"My dear boy," said the Marmot, by way of consoling him, "you can do nothing. It is destiny. It is written in the decrees of wisdom that all boys who are lazy, and who take a dislike to books, to schools, and to masters, and who pass their time in amusement, games, and diversions, must end sooner or later by becoming transformed into so many little donkeys."

"But is it really so?" asked the puppet, sobbing.

"It is indeed only too true! And tears are now useless. You should have thought of it sooner!"

"But it was not my fault; believe me, little Marmot, the fault was all Candlewick's!"

"And who is this Candlewick?"

"And why did you follow the advice of that false friend? of that bad companion?"

"Why? Because, my dear little Marmot, I am a puppet with no sense, and with no heart. Ah! if I had had the least heart I should never have left that good Fairy who loved me like a mamma, and who had done so much for me! And I would be no longer a puppet, for I would by this time have become a little boy like so many others: But if I meet Candlewick, woe to him! He shall hear what I think of him!"

And he turned to go out. But when he reached the door he remembered his donkey's ears, and, feeling ashamed to show them in public, what do you think he did? He took a big cotton cap and, putting it on his head, he pulled it well down over the point of his nose.

He then set out and went everywhere in search of Candlewick. He looked for him in the streets, in the squares, in the little theaters, in every possible place, but he could not find him. He inquired for him of everybody he met, but no one had seen him.

He then went to seek him at his house and, having reached the door, he knocked.

"Who is there?" asked Candlewick from within.

"It is I!" answered the puppet.

"Wait a moment and I will let you in."

After half an hour the door was opened and imagine Pinocchio's feelings when, upon going into the room, he saw his friend Candlewick with a big cotton cap on his head which came down over his nose.

At the sight of the cap Pinocchio felt almost consoled and thought to himself:

"Has my friend got the same illness that I have? Is he also suffering from donkey fever?"

And, pretending to have observed nothing, he asked him, smiling:

"How are you, my dear Candlewick?"

"Very well; as well as a mouse in a Parmesan cheese."

"Are you saying that seriously?"

"Why should I tell you a lie?"

"Excuse me; but why, then, do you keep that cotton cap on your head which covers up your ears?"

"The doctor ordered me to wear it because I have hurt this knee. And you, dear puppet, why have you got on that cotton cap pulled down over your nose?"

"The doctor prescribed it because I have grazed my foot."

After these words a long silence followed, during which the two friends did nothing but look mockingly at each other.

At last the puppet said in a soft voice to his companion:

"Satisfy my curiosity, my dear Candlewick: have you ever suffered from disease of the ears?"

"Never. Only since this morning one of my ears aches."

"Mine is also paining me."

"You also? And which of your ears hurts you?"

"Both of them. Can we have got the same illness?"

"Will you do me a kindness, Candlewick?"

"Willingly! With all my heart."

"Will you let me see your ears?"

"Why not? But first, my dear Pinocchio, I should like to see yours."

"Well," said the puppet, "let us come to an agreement like good friends."

"We will both take off our caps at the same moment. Do you agree?"

And Pinocchio began to count in a loud voice:

At the word "Three!" the two boys took off their caps and threw them into the air.

And then a scene followed that would seem incredible if it were not true. That is, that when Pinocchio and Candlewick discovered that they were both struck with the same misfortune, instead of feeling full of mortification and grief, they began to prick their ungainly ears and to make a thousand antics, and they ended by going into bursts of laughter.

"What is the matter with you?"

"Neither can I," exclaimed Pinocchio, tottering and beginning to cry.

And whilst they were talking, they both doubled up and began to run round the room on their hands and feet. And as they ran, their hands became hoofs, their faces lengthened into muzzles, and their backs became covered with a light gray hairy coat sprinkled with black.

But do you know what was the worst moment for these two wretched boys? The worst and the most humiliating moment was when their tails grew. Vanquished by shame and sorrow, they wept and lamented their fate.

Oh, if they had but been wiser! But instead of sighs and lamentations they could only bray like asses; and they brayed loudly and said in chorus: "Hee-haw!"

Whilst this was going on some one knocked at the door and a voice on the outside said:

"Open the door! I am the little man, I am the coachman who brought you to this country. Open at once, or it will be the worse for you!"