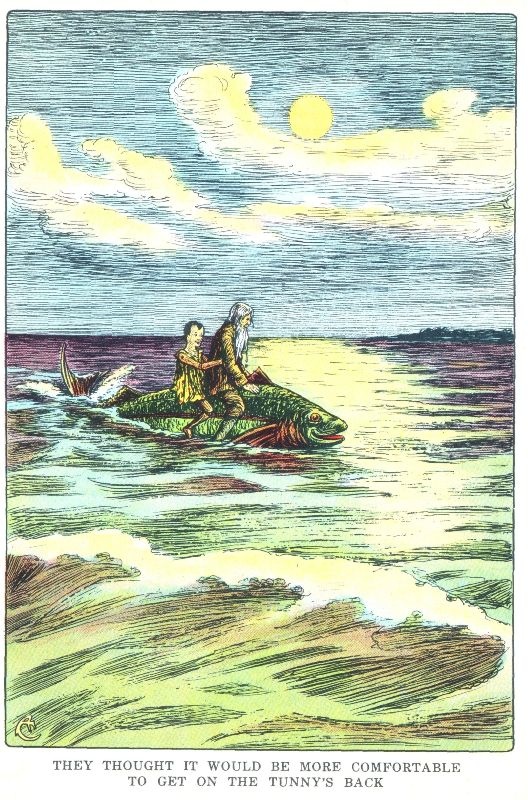 Pinocchio, having taken leave of his friend the Tunny, began to grope his way in the dark through the body of the Dog-Fish, taking a step at a time in the direction of the light that he saw shining dimly at a great distance.

The farther he advanced the brighter became the light; and he walked and walked until at last he reached it; and when he reached it—what did he find? I will give you a thousand guesses. He found a little table spread out and on it a lighted candle stuck into a green glass bottle, and, seated at the table, was a little old man. He was eating some live fish, and they were so very much alive that whilst he was eating them they sometimes even jumped out of his mouth.

At this sight Pinocchio was filled with such great and unexpected joy that he became almost delirious. He wanted to laugh, he wanted to cry, he wanted to say a thousand things, and instead he could only stammer out a few confused and broken words. At last he succeeded in uttering a cry of joy, and, opening his arms, he threw them around the little old man's neck, and began to shout:

"Then my eyes tell me true?" said the little old man, rubbing his eyes; "then you are really my dear Pinocchio?"

"Yes, yes, I am Pinocchio, really Pinocchio! And you have quite forgiven me, have you not? Oh, my dear papa, how good you are! And to think that I, on the contrary—Oh! but if you only knew what misfortunes have been poured on my head, and all that has befallen me! Only imagine, the day that you, poor, dear papa, sold your coat to buy me a spelling-book, that I might go to school, I escaped to see the puppet show, and the showman wanted to put me on the fire, that I might roast his mutton, and he was the same that afterwards gave me five gold pieces to take them to you, but I met the Fox and the Cat, who took me to the inn of The Red Craw-Fish, where they ate like wolves, and I left by myself in the middle of the night, and I encountered assassins who ran after me, and I ran away, and they followed, and I ran, and they always followed me, and I ran, until they hung me to a branch of a Big Oak, and the beautiful Child with blue hair sent a little carriage to fetch me, and the doctors when they saw me said immediately, 'If he is not dead, it is a proof that he is still alive'—and then by chance I told a lie, and my nose began to grow until I could no longer get through the door of the room, for which reason I went with the Fox and the Cat to bury the four gold pieces, for one I had spent at the inn, and the Parrot began to laugh, and instead of two thousand gold pieces I found none left, for which reason the judge when he heard that I had been robbed had me immediately put in prison to content the robbers, and then when I was coming away I saw a beautiful bunch of grapes in a field, and I was caught in a trap, and the peasant, who was quite right, put a dog-collar round my neck that I might guard the poultry-yard, and acknowledging my innocence let me go, and the Serpent with the smoking tail began to laugh and broke a blood-vessel in his chest, and so I returned to the house of the beautiful Child, who was dead, and the Pigeon, seeing that I was crying, said to me, 'I have seen your father who was building a little boat to go in search of you,' and I said to him, 'Oh! if I also had wings,' and he said to me, 'Do you want to go to your father?' and I said, 'Without doubt! but who will take me to him?' and he said to me, 'I will take you,' and I said to him, 'How?' and he said to me, 'Get on my back,' and so we flew all night, and then in the morning all the fishermen who were looking out to sea said to me, 'There is a poor man in a boat who is on the point of being drowned,' and I recognized you at once, even at that distance, for my heart told me, and I made signs to you to return to land."

"I also recognized you," said Geppetto, "and I would willingly have returned to the shore, but what was I to do! The sea was tremendous and a great wave upset my boat. Then a horrible Dog-Fish, who was near, as soon as he saw me in the water, came towards me, and, putting out his tongue, took hold of me and swallowed me as if I had been a little apple tart."

"And how long have you been shut up here?" asked Pinocchio.

"Since that day—it must be nearly two years ago; two years, my dear Pinocchio, that have seemed like two centuries!"

"And how have you managed to live? And where did you get the candle? And the matches to light it? Who gave them to you?"

"Stop, and I will tell you everything. You must know, then, that in the same storm in which my boat was upset a merchant vessel foundered. The sailors were all saved, but the vessel went to the bottom, and the Dog-Fish, who had that day an excellent appetite, after he had swallowed me, swallowed also the vessel."

"He swallowed it in one mouthful, and the only thing that he spat out was the mainmast, that had stuck between his teeth like a fish-bone. Fortunately for me, the vessel was laden with preserved meat in tins, biscuit, bottles of wine, dried raisins, cheese, coffee, sugar, candles, and boxes of wax matches. With this providential supply I have been able to live for two years. But I have arrived at the end of my resources; there is nothing left in the larder, and this candle that you see burning is the last that remains."

"After that, dear boy, we shall both remain in the dark."

"Then, dear little papa," said Pinocchio, "there is no time to lose. We must think of escaping."

"We must escape through the mouth of the Dog-Fish, throw ourselves into the sea and swim away."

"You talk well; but, dear Pinocchio, I don't know how to swim."

"What does that matter? I am a good swimmer, and you can get on my shoulders and I will carry you safely to shore."

"All illusions, my boy!" replied Geppetto, shaking his head, with a melancholy smile. "Do you suppose it possible that a puppet like you, scarcely a yard high, could have the strength to swim with me on his shoulders!"

Without another word Pinocchio took the candle in his hand, and, going in front to light the way, he said to his father:

And they walked for some time and traversed the body and the stomach of the Dog-Fish. But when they had arrived at the point where the monster's big throat began, they thought it better to stop to give a good look around and to choose the best moment for escaping.

Now, I must tell you that the Dog-Fish, being very old, and suffering from asthma and palpitation of the heart, was obliged to sleep with his mouth open. Pinocchio, therefore, having approached the entrance to his throat, and, looking up, could see beyond the enormous gaping mouth a large piece of starry sky and beautiful moonlight.

"This is the moment to escape," he whispered, turning to his father; "the Dog-Fish is sleeping like a dormouse, the sea is calm, and it is as light as day. Follow me, dear papa, and in a short time we shall be in safety."

They immediately climbed up the throat of the sea-monster, and, having reached his immense mouth, they began to walk on tiptoe down his tongue.

Before taking the final leap the puppet said to his father:

"Get on my shoulders and put your arms tightly around my neck. I will take care of the rest."

As soon as Geppetto was firmly settled on his son's shoulders, Pinocchio, feeling sure of himself, threw himself into the water and began to swim. The sea was as smooth as oil, the moon shone brilliantly, and the Dog-Fish was sleeping so profoundly that even a cannonade would have failed to wake him.