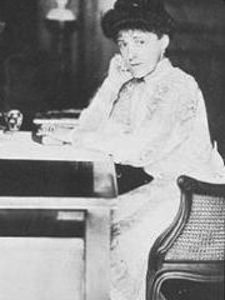 The novelist known as Edith Wharton (1862 - 1937) was born as Edith Newbold Jones. The Joneses were a wealthy New York family and one of Wharton's biographers claims that the phrase "Keeping up with the Joneses" is in reference to her father's family.

As part of America's privileged class, Edith Wharton was well-acquainted with many public figures of the day and counted Henry James, F. Scott Fitzgerald and Sinclair Lewis amongst her friends (Lewis dedicated his novel Babbitt to her).

Wharton was the first woman to win the Pulitzer Prize for literature, taking that honor in 1921 for The Age of Innocence. Wharton's 1911 novel, Ethan Frome has become a staple of American Literature and is widely studied in classrooms around the world.

In 1916, she was given France's highest honor, appointed Chevalier of the Legion of Honour, for her contribution to the War effort. We feature her work in our collection of World War I Literature. Wharton was awarded an honorary doctorate degree from Yale University in 1923, she was the first woman to claim that distinction. We feature Wharton in our collection of Pulitzer Prize Winners.

The Hermit and the Wild Woman
The Last Asset

A Coward
A Cup of Cold Water
Afterward
A Journey
April Showers
A Venetian Night's Entertainment
Crucial Instances
Expiation
In Trust
Kerfol
Mrs. Manstey's View
Souls Belated
The Best Man
The Bolted Door
The Choice
The Descent of Man
The Dilettante
The Fullness Of Life
The House Of The Dead Hand
The Lady's Maid's Bell
The Letters
The Mission of Jane
The Muse's Tragedy
The Other Two
The Pelican
The Portrait
The Pot-Boiler
The Pretext
The Quicksand
The Reckoning
The Triumph of Night
The Twilight of the God
The Verdict
Xingu

Aeropagus
A Failure
A Grave
A Hunting Song
All Saints
All Souls
A Meeting
An Autumn Sunset
Artemis to Actaeon
Belgium
Botticelli's Madonna in the Louvre
Chartres
Euryalus
Experience
Grief
Happiness
Jade
Life
Margaret of Cortona
Moonrise over Tyringham
Mould and Vase
Non Dolet
Ogrin the Hermit
Orpheus
Patience
Phaedra
Pomegranate Seed
Summer Afternoon (Bodiam Castle, Sussex)
Survival
The Bread of Angels
The Eumenides
The Last Giustianini
The Mortal Lease
The Old Pole Star
The One Grief
The Parting Day
The Sonnet
The Tomb of Ilaria Giunigi
The Torch-Bearer
Two Backgrounds
Uses
Versalius in Zante
Wants
With the Tide
You and You; To the American Private in the Great War