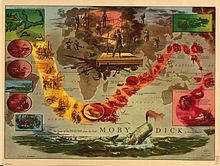 As we were walking down the end of the wharf towards the ship, Queequeg carrying his harpoon, Captain Peleg in his gruff voice loudly hailed us from his wigwam, saying he had not suspected my friend was a cannibal, and furthermore announcing that he let no cannibals on board that craft, unless they previously produced their papers. "What do you mean by that, Captain Peleg?" said I, now jumping on the bulwarks, and leaving my comrade standing on the wharf.

"Yes," said Captain Bildad in his hollow voice, sticking his head from behind Peleg's, out of the wigwam. "He must show that he's converted. Son of darkness," he added, turning to Queequeg, "art thou at present in communion with any Christian church?"

"Why," said I, "he's a member of the first Congregational Church." Here be it said, that many tattooed savages sailing in Nantucket ships at last come to be converted into the churches.

"First Congregational Church," cried Bildad, "what! that worships in Deacon Deuteronomy Coleman's meeting-house?" and so saying, taking out his spectacles, he rubbed them with his great yellow bandana handkerchief, and putting them on very carefully, came out of the wigwam, and leaning stiffly over the bulwarks, took a good long look at Queequeg.

"How long hath he been a member?" he then said, turning to me; "not very long, I rather guess, young man."

"No," said Peleg, "and he hasn't been baptized right either, or it would have washed some of that devil's blue off his face."

"Do tell, now," cried Bildad, "is this Philistine a regular member of Deacon Deuteronomy's meeting? I never saw him going there, and I pass it every Lord's day."

"I don't know anything about Deacon Deuteronomy or his meeting," said I; "all I know is, that Queequeg here is a born member of the First Congregational Church. He is a deacon himself, Queequeg is."

Finding myself thus hard pushed, I replied, "I mean, sir, the same ancient Catholic Church to which you and I, and Captain Peleg there, and Queequeg here, and all of us, and every mother's son and soul of us belong; the great and everlasting First Congregation of this whole worshipping world; we all belong to that; only some of us cherish some crotchets no ways touching the grand belief; in that we all join hands."

"Splice, thou mean'st splice hands," cried Peleg, drawing nearer. "Young man, you'd better ship for a missionary, instead of a fore-mast hand; I never heard a better sermon. Deacon Deuteronomy- why Father Mapple himself couldn't beat it, and he's reckoned something. Come aboard, come aboard: never mind about the papers. I say, tell Quohog there- what's that you call him? tell Quohog to step along. By the great anchor, what a harpoon he's got there! looks like good stuff that; and he handles it about right. I say, Quohog, or whatever your name is, did you ever stand in the head of a whale-boat? did you ever strike a fish?"

Without saying a word, Queequeg, in his wild sort of way, jumped upon the bulwarks, from thence into the bows of one of the whale-boats hanging to the side; and then bracing his left knee, and poising his harpoon, cried out in some such way as this:-

"Cap'ain, you see him small drop tar on water dere? You see him? well, spose him one whale eye, well, den!" and taking sharp aim at it, he darted the iron right over old Bildad's broad brim, clean across the ship's decks, and struck the glistening tar spot out of sight.

"Quick, Bildad," said Peleg, his partner, who, aghast at the close vicinity of the flying harpoon, had retreated towards the cabin gangway. "Quick, I say, you Bildad, and get the ship's papers. We must have Hedgehog there, I mean Quohog, in one of our boats. Look ye, Quohog, we'll give ye the ninetieth lay, and that's more than ever was given a harpooneer yet out of Nantucket."

So down we went into the cabin, and to my great joy Queequeg was soon enrolled among the same ship's company to which I myself belonged.

When all preliminaries were over and Peleg had got everything ready for signing, he turned to me and said, "I guess, Quohog there don't know how to write, does he? I say, Quohog, blast ye! dost thou sign thy name or make thy mark?

But at this question, Queequeg, who had twice or thrice before taken part in similar ceremonies, looked no ways abashed; but taking the offered pen, copied upon the paper, in the proper place, an exact counterpart of a queer round figure which was tattooed upon his arm; so that through Captain Peleg's obstinate mistake touching his appellative, it stood something like this:-

Meanwhile Captain Bildad sat earnestly and steadfastly eyeing Queequeg, and at last rising solemnly and fumbling in the huge pockets of his broadskirted drab coat took out a bundle of tracts, and selecting one entitled "The Latter Day Coming; or No Time to Lose," placed it in Queequeg's hands, and then grasping them and the book with both his, looked earnestly into his eyes, and said, "Son of darkness, I must do my duty by thee; I am part owner of this ship, and feel concerned for the souls of all its crew; if thou still clingest to thy Pagan ways, which I sadly fear, I beseech thee, remain not for aye a Belial bondsman. Spurn the idol Bell, and the hideous dragon; turn from the wrath to come; mind thine eye, I say; oh! goodness gracious! steer clear of the fiery pit!"

Something of the salt sea yet lingered in old Bildad's language, heterogeneously mixed with Scriptural and domestic phrases.

"Avast there, avast there, Bildad, avast now spoiling our harpooneer," Peleg. "Pious harpooneers never make good voyagers- it takes the shark out of 'em; no harpooneer is worth a straw who aint pretty sharkish. There was young Nat Swaine, once the bravest boat-header out of all Nantucket and the Vineyard; he joined the meeting, and never came to good. He got so frightened about his plaguy soul, that he shrinked and sheered away from whales, for fear of after-claps, in case he got stove and went to Davy Jones."

"Peleg! Peleg!" said Bildad, lifting his eyes and hands, "thou thyself, as I myself, hast seen many a perilous time; thou knowest, Peleg, what it is to have the fear of death; how, then, can'st thou prate in this ungodly guise. Thou beliest thine own heart, Peleg. Tell me, when this same Pequod here had her three masts overboard in that typhoon on Japan, that same voyage when thou went mate with Captain Ahab, did'st thou not think of Death and the Judgment then?"

"Hear him, hear him now," cried Peleg, marching across the cabin, and thrusting his hands far down into his pockets,- "hear him, all of ye. Think of that! When every moment we thought the ship would sink! Death and the Judgment then? What? With all three masts making such an everlasting thundering against the side; and every sea breaking over us, fore and aft. Think of Death and the Judgment then? No! no time to think about death then. Life was what Captain Ahab and I was thinking of; and how to save all hands how to rig jury-masts how to get into the nearest port; that was what I was thinking of."

Bildad said no more, but buttoning up his coat, stalked on deck, where we followed him. There he stood, very quietly overlooking some sailmakers who were mending a top-sail in the waist. Now and then he stooped to pick up a patch, or save an end of tarred twine, which otherwise might have been wasted.