Billy Budd
Mardi: and a Voyage Thither
Moby-Dick; or, The Whale
Omoo: A Narrative of Adventures in the South Seas
Redburn. His First Voyage
The Confidence Man
Typee
White-Jacket

Bartleby, the Scrivener
Benito Cereno
Cock-A-Doodle-Doo!
I and My Chimney
Jimmy Rose
Poor Man's Pudding and Rich Man's Crumbs
The Apple-Tree Table
The Bell-Tower
The Chase
The Encantadas; or, Enchanted Isles
The Fiddler
The 'Gees
The Happy Failure
The Lightning-Rod Man
The Paradise of Bachelors and the Tartarus of Maids
The Piazza

Hawthorne and His Mosses

Herman Melville belongs to the group of artists whose works grew in importance and stature after their death. His works exemplify the genre of Dark Romanticism. Born in New York City in 1819, he published Moby-Dick; or The Whale in 1851, the year before Harriet Beecher Stowe was to publish Uncle Tom's Cabin and the year after Nathanial Hawthorne published The Scarlet Letter. Melville dedicated the book to fellow Dark Romantic, Nathaniel Hawthorne: "In token of my admiration for his genius, this book is inscribed to Nathaniel Hawthorne."

Herman Melville grew up listening to seafaring tales. Melville was enthralled with the yarns about whaling expeditions and other adventures at sea. In 1839, at the age of twenty, he took to the seas himself, starting off as a cabin boy on the merchant ship St. Lawrence. January of 1841 found him aboard the whaling ship Acushent. After a string of adventures, some of them rather misbegotten, he left the sea and settled into his mother's house in the fall of 1844, determined to write about his adventures. 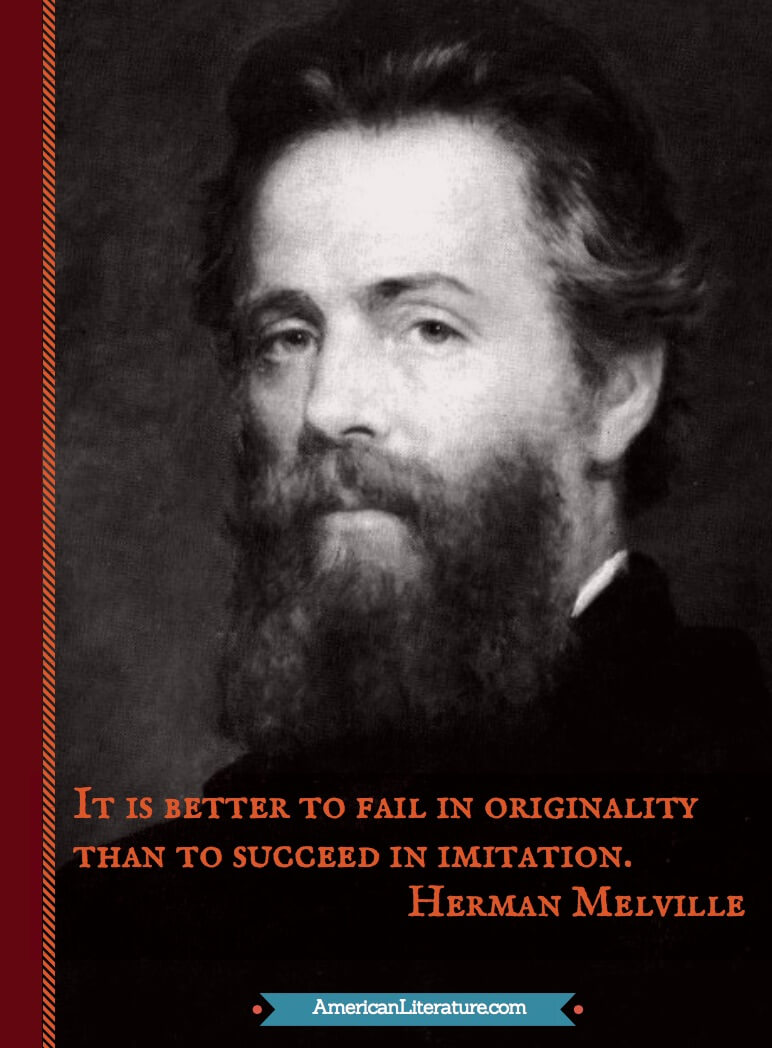 His first manuscript, for the novel Typee was turned down in America, partly because the publishers had difficulty believing the tales were true. The book was published in England in February 1846 and launched his career and ambitions. Things progressed well for Melville; he published more novels and on an upswing in his career he married Elizabeth Shaw, the daughter of the Chief Justice of Massachusetts. Melville burnished his portfolio, quickly turning out Omoo in 1847, Mardi in 1849, then Redburn in 1849, and White-Jacket in 1850.

Then Herman Melville turned to a higher amibtion, the writing of Moby-Dick. In June of 1850, he described the book to his publisher in England as, "a romance of adventure, founded upon certain wild legends in the Southern Sperm Whale Fisheries." In early August, Melville met and became friends with Nathaniel Hawthorne, to whom Moby-Dick would be dedicated. The novel appeared in England on October 18th, 1851 as The Whale and on November 14th in America where it as published as Moby-Dick. Unfortunately, the novel was not well recieved and it marked a turn in Melville's fortunes. It was disliked by critics and only sold 3,000 copies during his lifetime.

Unlike his contemporaries, Melville's career faded after the publication of Moby Dick and he was considered a failure when he passed away in 1891; the local paper where he died referred to him as a "long forgotten" author. His work was widely recognized after his death and Melville has taken his place amongst the literary giants.

You may enjoy reading D.H. Lawrence's chapters dedicated to Melville and Moby Dick in his book, Studies in Classic American Literature.