Moby-Dick; or, The Whale, published in 1851, recounts the adventures of the narrator Ishmael as he sails on the whaling ship, Pequod, under the command of the monomaniacal Captain Ahab. Melville dedicated the book to fellow Dark Romantic, Nathaniel Hawthorne: "In token of my admiration for his genius, this book is inscribed to Nathaniel Hawthorne."
[Teachers and students may find useful our Moby-Dick Study Guide. We also offer a short story version of the chapter, The Chase for your convenience.]

Ishmael believes he has signed onto a routine commission aboard a normal whaling vessel, but he soon learns that Captain Ahab is not guiding the Pequod in the simple pursuit of commerce but is seeking one specific whale, Moby-Dick, a great white whale infamous for his giant size and his ability to destroy the whalers that seek him. Captain Ahab's wooden leg is the result of his first encounter with the whale, when he lost both leg and ship. After the ship sails it becomes clear that Captain Ahab is bent on revenge and he intends to get Moby-Dick.

Ahab demonstrates erratic behavior from the very beginning and his eccentricities magnify as the voyage progresses. As the novel draws to a conclusion, the Pequod encounters the whaling ship Rachel. The Rachel's captain asks Ahab to help him in a search and rescue effort for his whaling-crew that went missing the day before -- and the captain's son is among the missing. But when Ahab learns that the crew disappeared while tangling with Moby-Dick he refuses the call to aid in the rescue so that he may hunt Moby-Dick instead. 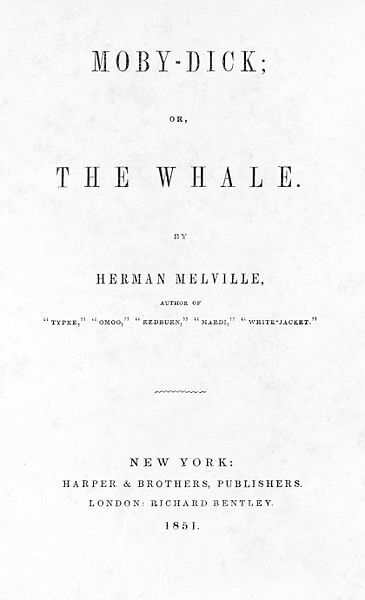 The encounter with Moby-Dick brings a tragic end to the affair. Ishmael alone survives, using his friend Queequeg's coffin as a flotation device until he is ironically rescued by the Rachel which has continued to search for its missing crew.

Readers, teachers and students should also take note of a peculiar historical curiosity. After enjoying some success in the 1840s, the publication of Moby-Dick (1851) marked Melville's decline as a popular writer. He was unable to support himself as a writer and accepted a job at the New York Customs House. He continued to write, even as he faded into obscurity, turning to poetry in his later years. He published his poems but they were ignored and went unread. Like his novel about the great white whale, his poems are also esteemed by modern critics and scholars.

It was only in the early 1900s that Moby-Dick gained attention and acclaim. During his lifetime, the novel sold a scant 3,000 copies. In modern times the novel is not only considered a great American classic, it is also heralded as one of greatest novels in the English language. Featured in our collection of 25 Great American Novels.

I hope you enjoy reading it.

Teachers and students looking for further summary and analysis might wish to read D. H. Lawrence's chapter on Moby-Dick from his book Studies in Classic American Literature. 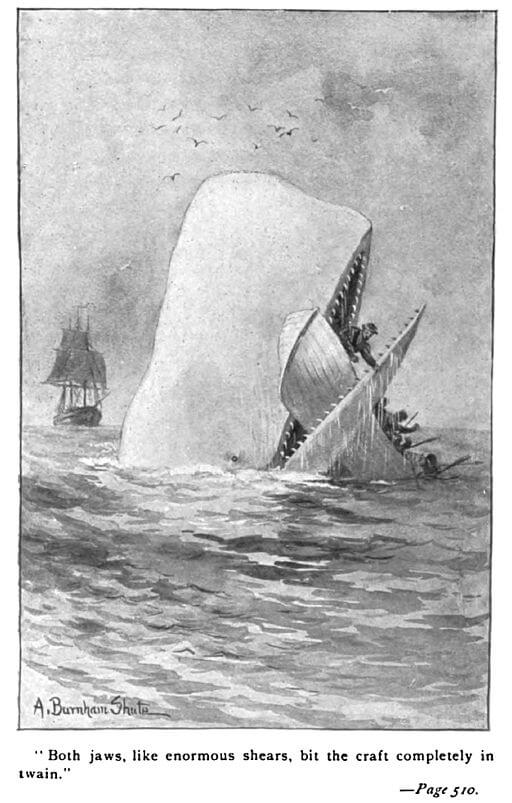 Chapter 42 - The Whiteness of The Whale

Chapter 55 - Of the Monstrous Pictures of Whales

Chapter 57 - Of Whales in Paint; in Teeth; in Wood; in Sheet-Iron; in Stone; in Mountains; in Stars

Chapter 81 - The Pequod Meets The Virgin

Chapter 82 - The Honor and Glory of Whaling

Chapter 91 - The Pequod Meets The Rose-Bud

Chapter 94 - A Squeeze of the Hand

Chapter 98 - Stowing Down and Clearing Up

Chapter 100 - Leg and Arm. The Pequod of Nantucket, Meets the Samuel Enderby, of London

Chapter 102 - A Bower in the Arsacides

Chapter 103 - Measurement of The Whale's Skeleton

Chapter 105 - Does the Whale's Magnitude Diminish? - Will He Perish?

Chapter 108 - Ahab and the Carpenter

Chapter 109 - Ahab and Starbuck in the Cabin

Chapter 110 - Queequeg in His Coffin

Chapter 115 - The Pequod Meets The Bachelor

Chapter 128 - The Pequod Meets The Rachel

Chapter 131 - The Pequod Meets The Delight

Return to the Herman Melville library.