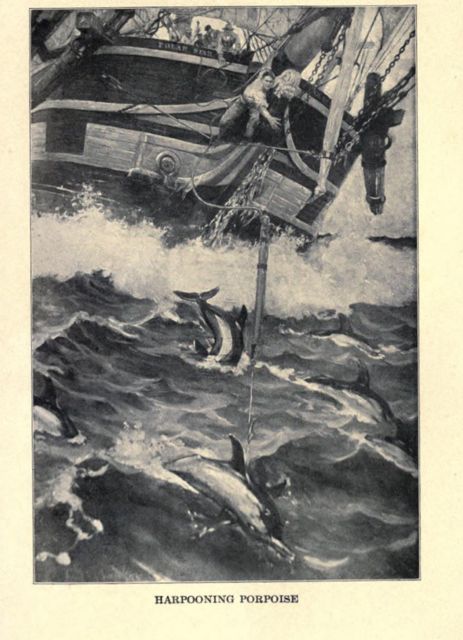 Some chapters back, one Bulkington was spoken of, a tall, newlanded mariner, encountered in New Bedford at the inn.

When on that shivering winter's night, the Pequod thrust her vindictive bows into the cold malicious waves, who should I see standing at her helm but Bulkington! I looked with sympathetic awe and fearfulness upon the man, who in mid-winter just landed from a four years' dangerous voyage, could so unrestingly push off again for still another tempestuous term. The land seemed scorching to his feet. Wonderfullest things are ever the unmentionable; deep memories yield no epitaphs; this six-inch chapter is the stoneless grave of Bulkington. Let me only say that it fared with him as with the storm-tossed ship, that miserably drives along the leeward land. The port would fain give succor; the port is pitiful; in the port is safety, comfort, hearthstone, supper, warm blankets, friends, all that's kind to our mortalities. But in that gale, the port, the land, is that ship's direst jeopardy; she must fly all hospitality; one touch of land, though it but graze the keel, would make her shudder through and through. With all her might she crowds all sail off shore; in so doing, fights 'gainst the very winds that fain would blow her homeward; seeks all the lashed sea's landlessness again; for refuge's sake forlornly rushing into peril; her only friend her bitterest foe!

Know ye now, Bulkington? Glimpses do ye seem to see of that mortally intolerable truth; that all deep, earnest thinking is but the intrepid effort of the soul to keep the open independence of her sea; while the wildest winds of heaven and earth conspire to cast her on the treacherous, slavish shore?

But as in landlessness alone resides highest truth, shoreless, indefinite as God- so better is it to perish in that howling infinite, than be ingloriously dashed upon the lee, even if that were safety! For worm-like, then, oh! who would craven crawl to land! Terrors of the terrible! is all this agony so vain? Take heart, take heart, O Bulkington! Bear thee grimly, demigod! Up from the spray of thy ocean-perishing- straight up, leaps thy apotheosis!