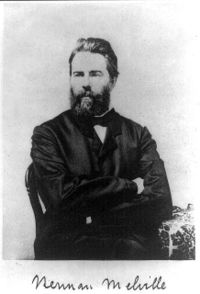 Haul in the chains! Let the carcase go astern!

The vast tackles have now done their duty. The peeled white body of the beheaded whale flashes like a marble sepulchre; though changed in hue, it has not perceptibly lost anything in bulk. It is still colossal. Slowly it floats more and more away, the water round it torn and splashed by the insatiate sharks, and the air above vexed with rapacious flights of screaming fowls, whose beaks are like so many insulting poniards in the whale.The vast white headless phantom floats further and further from the ship, and every rod that it so floats, what seem square roods of sharks and cubic roods of fowls, augment the murderous din. For hours and hours from the almost stationary ship that hideous sight is seen. Beneath the unclouded and mild azure sky, upon the fair face of the pleasant sea, waited by the joyous breezes, that great mass of death floats on and on, till lost in infinite perspectives.

There's a most doleful and most mocking funeral! The sea-vultures all in pious mourning, the air-sharks all punctiliously in black or speckled. In life but few of them would have helped the whale, I ween, if peradventure he had needed it; but upon the banquet of his funeral they most piously do pounce. Oh, horrible vulturism of earth! from which not the mightiest whale is free.

Nor is this the end. Desecrated as the body is, a vengeful ghost survives and hovers over it to scare. Espied by some timid man-of-war or blundering discovery-vessel from afar, when the distance obscuring the swarming fowls, nevertheless still shows the white mass floating in the sun, and the white spray heaving high against it; straightway the whale's unharming corpse, with trembling fingers is set down in the log- shoals, rocks, and breakers hereabout: beware! And for years afterwards, perhaps, ships shun the place; leaping over it as silly sheep leap over a vacuum, because their leader originally leaped there when a stick was held. There's your law of precedents; there's your utility of traditions; there's the story of your obstinate survival of old beliefs never bottomed on the earth, and now not even hovering in the air! There's orthodoxy!

Thus, while in the life the great whale's body may have been a real terror to his foes, in his death his ghost becomes a powerless panic to a world.

Are you a believer in ghosts, my friend? There are other ghosts than the Cock-Lane one, and far deeper men than Doctor Johnson who believe in them.