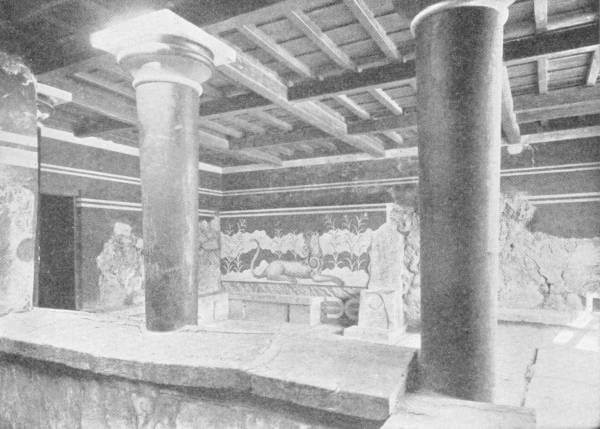 THE earliest boats and ships must have come into use some twenty-five or thirty thousand years ago. Man was probably paddling about on the water with a log of wood or an inflated skin to assist him, at latest in the beginnings of the Neolithic period. A basketwork boat covered with skin and caulked was used in Egypt and Sumeria from the beginnings of our knowledge. Such boats are still used there. They are used to this day in Ireland and Wales and in Alaska; sealskin boats still make the crossing of Behring Straits. The hollow log followed as tools improved. The building of boats and then ships came in a natural succession.

Perhaps the legend of Noah’s Ark preserves the memory of some early exploit in shipbuilding, just as the story of the Flood, so widely distributed among the peoples of the world, may be the tradition of the flooding of the Mediterranean basin.

There were ships upon the Red Sea long before the pyramids were built, and there were ships on the Mediterranean and Persian Gulf by 7000 B.C. Mostly these were the ships of fishermen, but some were already trading and pirate ships—for knowing what we do of mankind we may guess pretty safely that the first sailors plundered where they could and traded where they had to do so.

The seas on which these first ships adventured were inland seas on which the wind blew fitfully and which were often at a dead calm for days together, so that sailing did not develop beyond an accessory use. It is only in the last four hundred years that the well-rigged, ocean-going, sailing ship has developed. The ships of the ancient world were essentially rowing ships which hugged the shore and went into harbour at the first sign of rough weather. As ships grew into big galleys they caused a demand for war captives as galley slaves.

We have already noted the appearance of the Semitic people as wanderers and nomads in the region of Syria and Arabia, and how they conquered Sumeria and set up first the Akkadian and then the first Babylonian Empire. In the west these same Semitic peoples {92}were taking to the sea. They set up a string of harbour towns along the Eastern coast of the Mediterranean, of which Tyre and Sidon were the chief; and by the time of Hammurabi in Babylon, they had spread as traders, wanderers and colonizers over the whole Mediterranean basin. These sea Semites were called the Phœnicians, They settled largely in Spain, pushing back the old Iberian Basque population and sending coasting expeditions through the straits of Gibraltar; and they set up colonies upon the north coast of Africa. Of Carthage, one of these Phœnician cities, we shall have much more to tell later.

But the Phœnicians were not the first people to have galleys in the Mediterranean waters. There was already a series of towns and cities among the islands and coasts of that sea belonging to a race or races apparently connected by blood and language with the Basques to the west and the Berbers and Egyptians to the south, the Ægean peoples. These peoples must not be confused with the Greeks, who come much later into our story; they were pre-Greek, but they had cities in Greece and Asia Minor; Mycenæ and Troy for example, and they had a great and prosperous establishment at Cnossos in Crete.

It is only in the last half century that the industry of excavating archæologists has brought the extent and civilization of the Ægean peoples to our knowledge. Cnossos has been most thoroughly explored; it was happily not succeeded by any city big enough to destroy its ruins, and so it is our chief source of information about this once almost forgotten civilization.

The history of Cnossos goes back as far as the history of Egypt; the two countries were trading actively across the sea by 4000 B.C. By 2500 B.C., that is between the time of Sargon I and Hammurabi, Cretan civilization was at its zenith.

Cnossos was not so much a town as a great palace for the Cretan monarch and his people. It was not even fortified. It was only fortified later as the Phœnicians grew strong, and as a new and more terrible breed of pirates, the Greeks, came upon the sea from the north.

The monarch was called Minos, as the Egyptian monarch was called Pharaoh; and he kept his state in a palace fitted with running water, with bathrooms and the like conveniences such as we know of in no other ancient remains. There he held great festivals and shows. There was bull-fighting, singularly like the bull-fighting that {93}still survives in Spain; there was resemblance even in the costumes of the bull-fighters; and there were gymnastic displays. The women’s clothes were remarkably modern in spirit; they wore corsets and flounced dresses. The pottery, the textile manufactures, the sculpture, painting, jewellery, ivory, metal and inlay work of these {94}Cretans was often astonishingly beautiful. And they had a system of writing, but that still remains to be deciphered.

This happy and sunny and civilized life lasted for some score of centuries. About 2000 B.C. Cnossos and Babylon abounded in comfortable and cultivated people who probably led very pleasant lives. They had shows and they had religious festivals, they had domestic slaves to look after them and industrial slaves to make a profit for them. Life must have seemed very secure in Cnossos for such people, sunlit and girdled by the blue sea. Egypt of course must have appeared rather a declining country in those days under the rule of her half-barbaric shepherd kings, and if one took an interest in politics one must have noticed how the Semitic people seemed to be getting everywhere, ruling Egypt, ruling distant Babylon, building Nineveh on the upper Tigris, sailing west to the Pillars of Hercules (the straits of Gibraltar) and setting up their colonies on those distant coasts.

There were some active arid curious minds in Cnossos, because later on the Greeks told legends of a certain skilful Cretan artificer, Dædalus, who attempted to make some sort of flying machine, perhaps a glider, which collapsed and fell into the sea.

It is interesting to note some of the differences as well as the resemblances between the life of Cnossos and our own. To a Cretan gentleman of 2500 B.C. iron was a rare metal which fell out of the sky and was curious rather than useful—for as yet only meteoric iron was known, iron had not been obtained from its ores. Compare that with our modern state of affairs pervaded by iron everywhere. The horse again would be a quite legendary creature to our Cretan, a sort of super-ass which lived in the bleak northern lands far away beyond the Black Sea. Civilization for him dwelt chiefly in Ægean Greece and Asia Minor, where Lydians and Carians and Trojans lived a life and probably spoke languages like his own. There were Phœnicians and Ægeans settled in Spain and North Africa, but those were very remote regions to his imagination. Italy was still a desolate land covered with dense forests; the brown-skinned Etruscans had not yet gone there from Asia Minor. And one day perhaps this Cretan gentleman went down to the harbour and saw a captive who attracted his attention because he was very fair-complexioned {95}and had blue eyes. Perhaps our Cretan tried to talk to him and was answered in an unintelligible gibberish. This creature came from somewhere beyond the Black Sea and seemed to be an altogether benighted savage. But indeed he was an Aryan tribesman, of a race and culture of which we shall soon have much to tell, and the strange gibberish he spoke was to differentiate some day into Sanskrit, Persian, Greek, Latin, German, English and most of the chief languages of the world.

Such was Cnossos at its zenith, intelligent, enterprising, bright and happy. But about 1400 B.C. disaster came perhaps very suddenly upon its prosperity. The palace of Minos was destroyed, and its ruins have never been rebuilt or inhabited from that day to this. We do not know how this disaster occurred. The excavators note what appears to be scattered plunder and the marks of the fire. But the traces of a very destructive earthquake have also been found. Nature alone may have destroyed Cnossos, or the Greeks may have finished what the earthquake began.