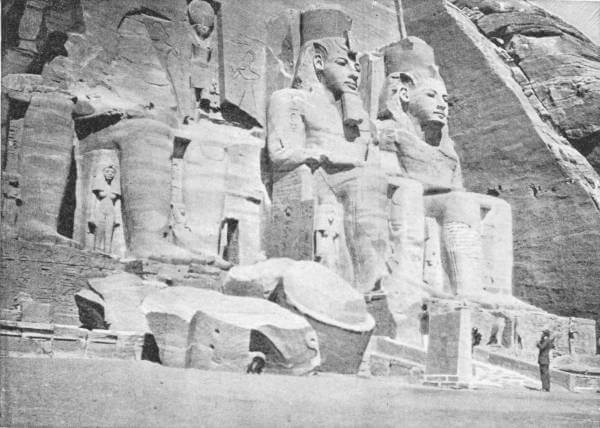 THE Egyptians had never submitted very willingly to the rule of their Semitic shepherd kings and about 1600 A.D. a vigorous patriotic movement expelled these foreigners. Followed a new phase or revival for Egypt, a period known to Egyptologists as the New Empire. Egypt, which had not been closely consolidated before the Hyksos invasion, was now a united country; and the phase of subjugation and insurrection left her full of military spirit. The Pharaohs became aggressive conquerors. They had now acquired the war horse and the war chariot, which the Hyksos had brought to them. Under Thothmes III and Amenophis III Egypt had extended her rule into Asia as far as the Euphrates.

We are entering now upon a thousand years of warfare between the once quite separated civilizations of Mesopotamia and the Nile. At first Egypt was ascendant. The great dynasties, the Seventeenth Dynasty, which included Thothmes III and Amenophis III and IV and a great queen Hatasu, and the Nineteenth, when Rameses II, supposed by some to have been the Pharaoh of Moses, reigned for sixty-seven years, raised Egypt to high levels of prosperity. In between there were phases of depression for Egypt, conquest by the Syrians and later conquest by the Ethiopians from the South. In Mesopotamia Babylon ruled, then the Hittites and the Syrians of Damascus rose to a transitory predominance; at one time the Syrians conquered Egypt; the fortunes of the Assyrians of Nineveh ebbed and flowed; sometimes the city was a conquered city; sometimes the Assyrians ruled in Babylon and assailed Egypt. Our space is too limited here to tell of the comings and goings of the armies of the Egyptians and of the various Semitic powers of Asia Minor, Syria and Mesopotamia. They were armies now provided with vast droves of war chariots, for the horse—still used only for {97}war and glory—had spread by this time into the old civilizations from Central Asia.

Great conquerors appear in the dim light of that distant time and pass, Tushratta, King of Mitanni, who captured Nineveh, Tiglath Pileser I of Assyria who conquered Babylon. At last the Assyrians became the greatest military power of the time. Tiglath Pileser III conquered Babylon in 745 B.C. and founded what historians call the New Assyrian Empire. Iron had also come now into civilization out of the north; the Hittites, the precursors of the Armenians, had it first and communicated its use to the Assyrians, and an Assyrian usurper, Sargon II, armed his troops with it. Assyria became the first power to expound the doctrine of blood and iron. Sargon’s son Sennacherib led an army to the borders of Egypt, and was defeated not by military strength but by the plague. Sennacherib’s grandson Assurbanipal (who is also known in history {98}by his Greek name of Sardanapalus) did actually conquer Egypt in 670 B.C. But Egypt was already a conquered country then under an Ethiopian dynasty. Sardanapalus simply replaced one conqueror by another.

If one had a series of political maps of this long period of history, this interval of ten centuries, we should have Egypt expanding and contracting like an amœba under a microscope, and we should see these various Semitic states of the Babylonians, the Assyrians, the Hittites and the Syrians coming and going, eating each other up and disgorging each other again. To the west of Asia Minor there would be little Ægean states like Lydia, whose capital was Sardis, and Caria. But after about 1200 B.C. and perhaps earlier, a new set of names would come into the map of the ancient world from {100}the north-east and from the north- west. These would be the names of certain barbaric tribes, armed with iron weapons and using horse-chariots, who were becoming a great affliction to the Ægean and Semitic civilizations on the northern borders. They all spoke variants of what once must have been the same language, Aryan.

Round the north-east of the Black and Caspian Seas were coming the Medes and Persians. Confused with these in the records of the time were Scythians and Samatians. From north-east or north-west came the Armenians, from the north- west of the sea-barrier through the Balkan peninsula came Cimmerians, Phrygians and the Hellenic tribes whom now we call the Greeks. They were raiders and robbers and plunderers of cities, these Ayrans, east and west alike. They were all kindred and similar peoples, hardy herdsmen who had taken to plunder. In the east they were still only borderers and raiders, but in the west they were taking cities and driving out the civilized Ægean populations. The Ægean peoples were so pressed that they were seeking new homes in lands beyond the Aryan range. Some were seeking a settlement in the delta of the Nile and being repulsed by the Egyptians; some, the Etruscans, seem to have sailed from Asia Minor to found a state in the forest wildernesses of middle Italy; some built themselves cities upon the south- east coasts of the Mediterranean and became later that people known in history as the Philistines.

Of these Aryans who came thus rudely upon the scene of the ancient civilizations we will tell more fully in a later section. Here we note simply all this stir and emigration amidst the area of the ancient civilizations, that was set up by the swirl of the gradual and continuous advance of these Aryan barbarians out of the northern forests and wildernesses between 1600 and 600 B.C.

And in a section to follow we must tell also of a little Semitic people, the Hebrews, in the hills behind the Phœnician and Philistine coasts, who began to be of significance in the world towards the end of this period. They produced a literature of very great importance in subsequent history, a collection of books, histories, poems, books of wisdom and prophetic works, the Hebrew Bible.

In Mesopotamia and Egypt the coming of the Aryans did not cause fundamental changes until after 600 B.C. The flight of the {101}Ægeans before the Greeks and even the destruction of Cnossos must have seemed a very remote disturbance to both the citizens of Egypt and of Babylon. Dynasties came and went in these cradle states of civilization, but the main tenor of human life went on, with a slow increase in refinement and complexity age by age. In Egypt the accumulated monuments of more ancient times—the pyramids were already in their third thousand of years and a show for visitors just as they are to- day—were supplemented by fresh and splendid buildings, more particularly in the time of the seventeenth and nineteenth dynasties. The great temples at Karnak and Luxor date from this time. All the chief monuments of Nineveh, the great temples, the winged bulls with human heads, the reliefs of kings and chariots and lion hunts, were done in these centuries between 1600 and 600 B.C., and this period also covers most of the splendours of Babylon.

Both from Mesopotamia and Egypt we now have abundant public records, business accounts, stories, poetry and private correspondence. We know that life, for prosperous and influential people in such cities as Babylon and the Egyptian Thebes, was already almost as refined and as luxurious as that of comfortable and prosperous people to-day. Such people lived an orderly and ceremonious life in beautiful and beautifully furnished and decorated houses, wore richly decorated clothing and lovely jewels; they had feasts and festivals, entertained one another with music and dancing, were waited upon by highly trained servants, were cared for by doctors and dentists. They did not travel very much or very far, but boating {102}excursions were a common summer pleasure both on the Nile and on the Euphrates. The beast of burthen was the ass; the horse was still used only in chariots for war and upon occasions of state. The mule was still novel and the camel, though it was known in Mesopotamia, had not been brought into Egypt. And there were few utensils of iron; copper and bronze remained the prevailing metals. Fine linen and cotton fabrics were known as well as wool. But there was no silk yet. Glass was known and beautifully coloured, but glass things were usually small. There was no clear glass and no optical use of glass. People had gold stoppings in their teeth but no spectacles on their noses.

One odd contrast between the life of old Thebes or Babylon and modern life was the absence of coined money. Most trade was still done by barter. Babylon was financially far ahead of Egypt. Gold and silver were used for exchange and kept in ingots; and there were bankers, before coinage, who stamped their names and the weight on these lumps of precious metal. A merchant or traveller would carry precious stones to sell to pay for his necessities. Most servants and workers were slaves who were paid not money but in kind. As money came in slavery declined.

A modern visitor to these crowning cities of the ancient world would have missed two very important articles of diet; there were no hens and no eggs. A French cook would have found small joy in Babylon. These things came from the East somewhere about the time of the last Assyrian empire.

Religion like everything else had undergone great refinement. Human sacrifice for instance had long since disappeared; animals or bread dummies had been substituted for the victim. (But the Phœnicians and especially the citizens of Carthage, their greatest settlement in Africa, were accused, later of immolating human beings.) When a great chief had died in the ancient days it had been customary to sacrifice his wives and slaves and break spear and bow at his tomb so that he should not go unattended and unarmed in the spirit world. In Egypt there survived of this dark tradition the pleasant custom of burying small models of house and shop and servants and cattle with the dead, models that give us to-day the liveliest realization of the safe and cultivated life of these ancient people, three thousand years and more ago.

Such was the ancient world before the coming of the Aryans out of the northern forests and plains. In India and China there were parallel developments. In the great valleys of both these regions agricultural city states of brownish peoples were growing up, but in India they do not seem to have advanced or coalesced so rapidly as the city states of Mesopotamia or Egypt. They were nearer the level of the ancient Sumerians or of the Maya civilization of America. Chinese history has still to be modernized by Chinese scholars and cleared of much legendary matter. Probably China at this time was in advance of India. Contemporary with the seventeenth dynasty in Egypt, there was a dynasty of emperors in China, the Shang dynasty, priest emperors over a loose-knit empire of subordinate kings. The chief duty of these early emperors was to perform the seasonal sacrifices. Beautiful bronze vessels from the time of the Shang dynasty still exist, and their beauty and workmanship compel us to recognize that many centuries of civilization must have preceded their manufacture.