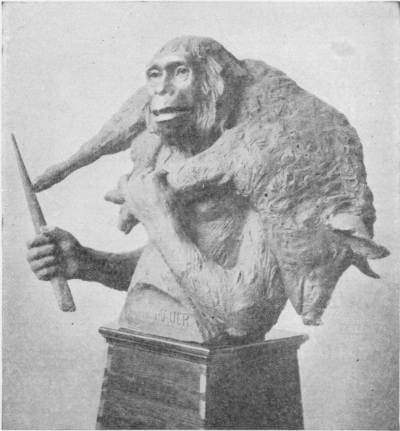 NATURALISTS divide the class Mammalia into a number of orders. At the head of these is the order Primates, which includes the lemurs, the monkeys, apes and man. Their classification was based originally upon anatomical resemblances and took no account of any mental qualities.

Now the past history of the Primates is one very difficult to decipher in the geological record. They are for the most part animals which live in forests like the lemurs and monkeys or in bare rocky places like the baboons. They are rarely drowned and covered up by sediment, nor are most of them very numerous species, and so they do not figure so largely among the fossils as the ancestors of the horses, camels and so forth do. But we know that quite early in the Cainozoic period, that is to say some forty million years ago or so, primitive monkeys and lemuroid creatures had appeared, poorer in brain and not so specialized as their later successors.

The great world summer of the middle Cainozoic period drew at last to an end. It was to follow those other two great summers in the history of life, the summer of the Coal Swamps and the vast summer of the Age of Reptiles. Once more the earth spun towards an ice age. The world chilled, grew milder for a time and chilled again. In the warm past hippopotami had wallowed through a lush sub-tropical vegetation, and a tremendous tiger with fangs like sabres, the sabre-toothed tiger, had hunted its prey where now the journalists of Fleet Street go to and fro. Now came a bleaker age and still bleaker ages. A great weeding and extinction of species occurred. A woolly rhinoceros, adapted to a cold climate, and the mammoth, a big woolly cousin of the elephants, the Arctic musk ox and the reindeer passed across the scene. Then century by century the Arctic ice cap, the wintry death of the great Ice Age, crept {44}southward. In England it came almost down to the Thames, in America it reached Ohio. There would be warmer spells of a few thousand years and relapses towards a bitterer cold.

Geologists talk of these wintry phases as the First, Second, Third and Fourth Glacial Ages, and of the interludes as Interglacial periods. We live to-day in a world that is still impoverished and scarred by that terrible winter. The First Glacial Age was coming on 600,000 years ago; the Fourth Glacial Age reached its bitterest some fifty thousand years ago. And it was amidst the snows of this long universal winter that the first man-like beings lived upon our planet.

By the middle Cainozoic period there have appeared various apes with many quasi-human attributes of the jaws and leg bones, but it is only as we approach these Glacial Ages that we find traces of creatures that we can speak of as “almost human.” These traces are not bones but implements. In Europe, in deposits of this period, between half a million and a million years old, we find flints {45}and stones that have evidently been chipped intentionally by some handy creature desirous of hammering, scraping or fighting with the sharpened edge. These things have been called “Eoliths” (dawn stones). In Europe there are no bones nor other remains of the creature which made these objects, simply the objects themselves. For all the certainty we have it may have been some entirely un-human but intelligent monkey. But at Trinil in Java, in accumulations of this age, a piece of a skull and various teeth and bones have been found of a sort of ape man, with a brain case bigger than that of any living apes, which seems to have walked erect. This creature is now called Pithecanthropus erectus, the walking ape man, and the little trayful of its bones is the only help our imaginations have as yet in figuring to, ourselves the makers of the Eoliths.

It is not until we come to sands that are almost a quarter of a million years old that we find any other particle of a sub- human being. But there are plenty of implements, and they are steadily improving in quality as we read on through the record. They are no longer clumsy Eoliths; they are now shapely instruments made with considerable skill. And they are much bigger than the similar implements afterwards made by true man. Then, in a sandpit at Heidelberg, appears a single quasi-human jaw-bone, a clumsy jaw-bone, absolutely chinless, far heavier than a true human jaw-bone and narrower, so that it is improbable the creature’s tongue could have moved about for articulate speech. On the strength of this jaw-bone, scientific men suppose this creature to have been a heavy, almost human monster, possibly with huge limbs and hands, possibly with a thick felt of hair, and they call it the Heidelberg Man.

This jaw-bone is, I think, one of the most tormenting objects in the world to our human curiosity. To see it is like looking through a defective glass into the past and catching just one blurred and tantalizing glimpse of this Thing, shambling through the bleak wilderness, clambering to avoid the sabre- toothed tiger, watching the woolly rhinoceros in the woods. Then before we can scrutinize the monster, he vanishes. Yet the soil is littered abundantly with the indestructible implements he chipped out for his uses.

Still more fascinatingly enigmatical are the remains of a creature found at Piltdown in Sussex in a deposit that may indicate an age between a hundred and a hundred and fifty thousand years ago, though some authorities would put these particular remains back in time to before the Heidelberg jaw- bone. Here there {47}are the remains of a thick sub-human skull much larger than any existing ape’s, and a chimpanzee-like jaw-bone which may or may not belong to it, and, in addition, a bat-shaped piece of elephant bone evidently carefully manufactured, through which a hole had apparently been bored. There is also the thigh-bone of a deer with cuts upon it like a tally. That is all.

What sort of beast was this creature which sat and bored holes in bones?

Scientific men have named him Eoanthropus, the Dawn Man. He stands apart from his kindred; a very different being either from the Heidelberg creature or from any living ape. No other vestige like him is known. But the gravels and deposits of from one hundred thousand years onward are increasingly rich in implements of flint and similar stone. And these implements are no longer rude “Eoliths.” The archæologists are presently able to distinguish scrapers, borers, knives, darts, throwing stones and hand axes ....

We are drawing very near to man. In our next section we shall have to describe the strangest of all these precursors of humanity, the Neanderthalers, the men who were almost, but not quite, true men.

But it may be well perhaps to state quite clearly here that no scientific man supposes either of these creatures, the Heidelberg Man or Eoanthropus, to be direct ancestors of the men of to-day. These are, at the closest, related forms.