VIII - The Age of Mammals 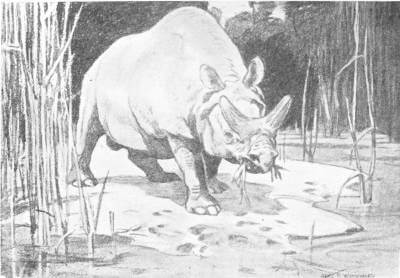 THE opening of the next great period in the life of the earth, the Cainozoic period, was a period of upheaval and extreme volcanic activity. Now it was that the vast masses of the Alps and Himalayas and the mountain backbone of the Rockies and Andes were thrust up, and that the rude outlines of our present oceans and continents appeared. The map of the world begins to display a first dim resemblance to the map of to-day. It is estimated now that between forty and eighty million years have elapsed from the beginnings of the Cainozoic period to the present time.

At the outset of the Cainozoic period the climate of the world was austere. It grew generally warmer until a fresh phase of great abundance was reached, after which conditions grew hard again and the earth passed into a series of extremely cold cycles, the Glacial Ages, from which apparently it is now slowly emerging.

But we do not know sufficient of the causes of climatic change at present to forecast the possible fluctuations of climatic conditions that lie before us. We may be moving towards increasing sunshine or lapsing towards another glacial age; volcanic activity and the upheaval of mountain masses may be increasing or diminishing; we do not know; we lack sufficient science.

With the opening of this period the grasses appear; for the first time there is pasture in the world; and with the full development of the once obscure mammalian type, appear a number of interesting grazing animals and of carnivorous types which prey upon these.

At first these early mammals seem to differ only in a few characters from the great herbivorous and carnivorous reptiles that ages before had flourished and then vanished from the earth. A {38}careless observer might suppose that in this second long age of warmth and plenty that was now beginning, nature was merely repeating the first, with herbivorous and carnivorous mammals to parallel the herbivorous and carnivorous dinosaurs, with birds replacing pterodactyls and so on. But this would be an altogether superficial comparison. The variety of the universe is infinite and incessant; it progresses eternally; history never repeats itself and no parallels are precisely true. The differences between the life of the Cainozoic and Mesozoic periods are far profounder than the resemblances.

The most fundamental of all these differences lies in the mental life of the two periods. It arises essentially out of the continuing contact of parent and offspring which distinguishes mammalian and in a lesser degree bird life, from the life of the reptile. With very few exceptions the reptile abandons its egg to hatch alone. The young reptile has no knowledge whatever of its parent; its mental life, such as it is, begins and ends with its own experiences. {39}It may tolerate the existence of its fellows but it has no communication with them; it never imitates, never learns from them, is incapable of concerted action with them. Its life is that of an isolated individual. But with the suckling and cherishing of young which was distinctive of the new mammalian and avian strains arose the possibility of learning by imitation, of communication, by warning cries and other concerted action, of mutual control and instruction. A teachable type of life had come into the world.

The earliest mammals of the Cainozoic period are but little superior in brain size to the more active carnivorous dinosaurs, but as we read on through the record towards modern times we find, in every tribe and race of the mammalian animals, a steady universal increase in brain capacity. For instance we find at a comparatively early stage that rhinoceros-like beasts appear. There is a creature, the Titanotherium, which lived in the earliest division of this period. It was probably very like a modern rhinoceros in its habits and needs. But its brain capacity was not one tenth that of its living successor.

The earlier mammals probably parted from their offspring as soon as suckling was over, but, once the capacity for mutual understanding has arisen, the advantages of continuing the association are very great; and we presently find a number of mammalian species displaying the beginnings of a true social life and keeping together in herds, packs and flocks, watching each other, imitating each other, taking warning from each other’s acts and cries. This is something that the world had not seen before among vertebrated animals. Reptiles and fish may no doubt be found in swarms and shoals; they have been hatched in quantities and similar conditions have kept them together, but in the case of the social and gregarious mammals the association arises not simply from a community of external forces, it is sustained by an inner impulse. They are not merely like one another and so found in the same places at the same times; they like one another and so they keep together. {40}

This difference between the reptile world and the world of our human minds is one our sympathies seem unable to pass. We cannot conceive in ourselves the swift uncomplicated urgency of a reptile’s instinctive motives, its appetites, fears and hates. We {41}cannot understand them in their simplicity because all our motives are complicated; our’s are balances and resultants and not simple urgencies. But the mammals and birds have self-restraint and consideration for other individuals, a social appeal, a self- control that is, at its lower level, after our own fashion. We can in consequence establish relations with almost all sorts of them. When they suffer they utter cries and make movements that rouse our feelings. We can make understanding pets of them with a mutual recognition. They can be tamed to self-restraint towards us, domesticated and taught.

That unusual growth of brain which is the central fact of Cainozoic times marks a new communication and interdependence of individuals. It foreshadows the development of human societies of which we shall soon be telling.

As the Cainozoic period unrolled, the resemblance of its flora and fauna to the plants and animals that inhabit the world to-day {42}increased. The big clumsy Uintatheres and Titanotheres, the Entelodonts and Hyracodons, big clumsy brutes like nothing living, disappeared. On the other hand a series of forms led up by steady degrees from grotesque and clumsy predecessors to the giraffes, camels, horses, elephants, deer, dogs and lions and tigers of the existing world. The evolution of the horse is particularly legible upon the geological record. We have a fairly complete series of forms from a small tapir-like ancestor in the early Cainozoic. Another line of development that has now been pieced together with some precision is that of the llamas and camels.