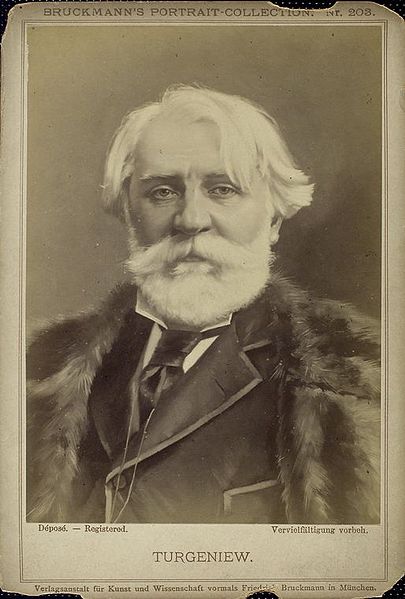 Russian novelist, short story writer, and playwright Ivan Sergeyevich Turgenev's (October 28, 1818 – September 3, 1883) authored a landmark in Russian Realism when he published his first short story collection, A Sportsman's Sketches, in 1852 [alternately titled, Sketches from a Hunter's Album, and Notes of a Hunter]. His second great achievement came in 1862 with the publication of his novel Fathers and Sons.

The following biographical detail is from a 1917 introductory note to that novel.

Ivan Sergyevitch Turgenev came of an old stock of the Russian nobility. He was born in Orel, in the province of Orel, which lies more than a hundred miles south of Moscow, on October 28, 1818. His education was begun by tutors at home in the great family mansion in the town of Spask, and he studied later at the universities of Moscow, St. Petersburg, and Berlin. The influence of the last, and of the compatriots with whom he associated there, was very great; and when he returned to Moscow in 1841, he was ambitious to teach Hegel to the students there. Before this could be arranged, however, he entered the Ministry of the Interior at St. Petersburg. While there his interests turned more and more toward literature. He wrote verses and comedies, read George Sand, and made the acquaintance of Dostoevsky and the critic Bielinski. His mother, a tyrannical woman with an ungovernable temper, was eager that he should make a brilliant official career; so, when he resigned from the Ministry in 1845, she showed her disapproval by cutting down his allowance and thus forcing him to support himself by the profession he had chosen. Turgenev was an enthusiastic hunter; and it was his experiences in the woods of his native province that supplied the material for "A Sportsman's Sketches," the book that first brought him reputation. The first of these papers appeared in 1847, and in the same year he left Russia in the train of Pauline Viardot, a singer and actress, to whom he had been devoted for three or four years and with whom he maintained relations for the rest of his life. For a year or two he lived chiefly in Paris or at a country house at Courtavenel in Brie, which belonged to Madame Viardot; but in 1850 he returned to Russia. His experiences were not such as to induce him to repatriate himself permanently. He found Dostoevsky banished to Siberia and Bielinski dead; and himself under suspicion by the government on account of the popularity of "A Sportsman's Sketches." For praising Gogol, who had just died, he was arrested and imprisoned for a short time, and for the next two years kept under police surveillance. Meantime he continued to write, and by the time that the close of the Crimean War made it possible for him again to go to western Europe, he was recognized as standing at the head of living Russian authors. His mother was now dead, the estates were settled, and with an income of about $5,000 a year he became a wanderer. He had, or imagined he had, very bad health, and the eminent specialists he consulted sent him from one resort to another, to Rome, the Isle of Wight, Soden, and the like. When Madame Viardot left the stage in 1864 and took up her residence at Baden-Baden, he followed her and built there a small house for himself. They returned to France after the Franco-Prussian War, and bought a villa at Bougival, near Paris, and this was his home for the rest of his life. Here, on September 3, 1883, he died after a long delirium due to his suffering from cancer of the spinal cord. His body was taken to St. Petersburg and was buried with national honors. The two works by Turgenev contained in the present volume are characteristic in their concern with social and political questions, and in the prominence in both of them of heroes who fail in action. Turgenev preaches no doctrine in his novels, has no remedy for the universe; but he sees clearly certain weaknesses of the Russian character and exposes these with absolute candor yet without unkindness. Much as he lived abroad, his books are intensely Russian; yet of the great Russian novelists he alone rivals the masters of western Europe in the matter of form. In economy of means, condensation, felicity of language, and excellence of structure he surpasses all his countrymen; and "Fathers and Children" and "A House of Gentlefolk" represent his great and delicate art at its best.

An Unhappy Girl
First Love
The Region of Dead Calm

A Desperate Character
A Strange Story
Knock, Knock, Knock
Mumu
The Counting-House
The District Doctor
The Dog
The Duellist
The Inn
The Watch