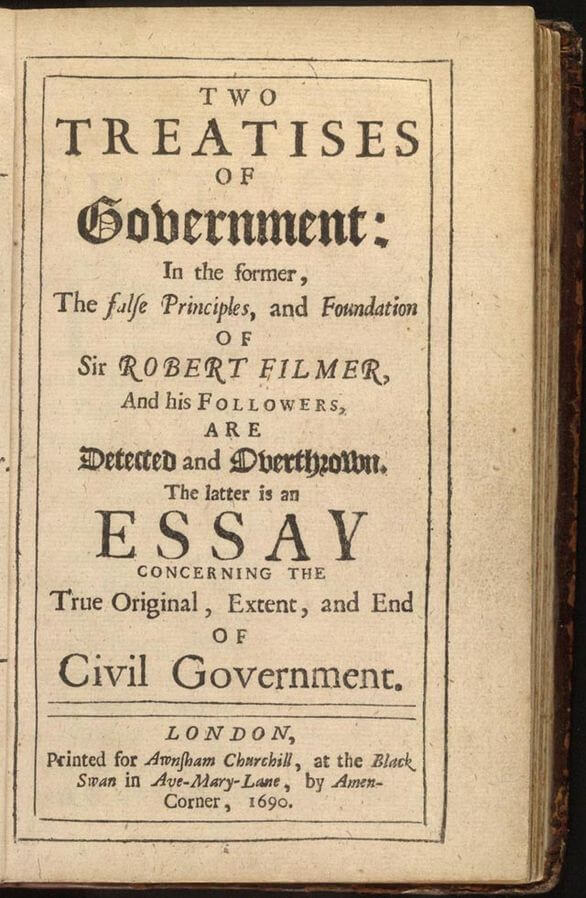 Two Treatises of Government (1689) was one of Locke's most influential works on social contract theory. He defended the claim that men are by nature free and equal, not subject to monarch rule. People have rights, such as the right to life, liberty, and property, inspiring America's revolutionaries. We feature his Second Treatise on Government, Book II, in which he addresses the states of civil government, nature, war, slavery, property, political societies, and tyranny. Visit American History for others

Book II - Chapter I - An Essay Concerning the True Original, Extent and End of Civil Government

Chapter II - Of the State of Nature

Chapter III - Of the State of War

Chapter VIII - Of the Beginning of Political Societies

Chapter IX - Of the Ends of Political Society and Government

Chapter X - Of the Forms of a Common-wealth

Chapter XI - Of the Extent of the Legislative Power

Chapter XII - Of the Legislative, Executive, and Federative Powers of the Common-wealth

Chapter XIII - Of the Subordination of Powers of the Common-wealth

Chapter XV - Of Paternal, Political, and Despotical Power, Considered Together

Chapter XIX - Of the Dissolution of Government

Return to the John Locke library.