In Flanders Fields (1915) became a symbolic WWI poem written by McCrae, who served during the war as a lieutenant colonel and surgeon. He was inspired to write it May 3, 1915 after presiding over the funeral of Lieutenant Alexis Helmer, who died in the Second Battle of Ypres. The poem celebrates the poppy as a symbol of resilience. It is structured as a "rondeau" form featuring a repeating verse, commonly set to music in the 13th through 15th centuries.
In Flanders Fields was featured as The Short Story of the Day on Thu, Dec 08, 2022

* McCrae's handwritten version ends the first line with "grow." Apparently, he first discarded the poem, displeased with it, but fellow soldier's retrieved it. 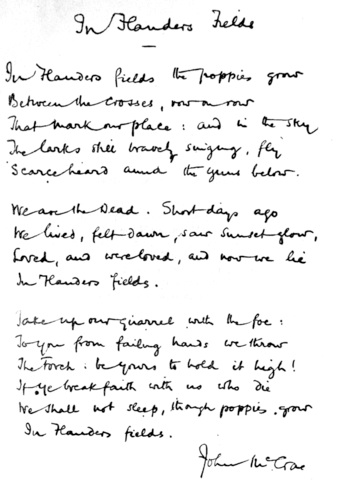 Featured in our collection of World War I Literature, Poetry for Students, and 100 Great Poems.

Add In Flanders Fields to your library.

Return to the John McCrae library , or . . . Read the next poem; The Anxious Dead