Little Bo-Peep by Kronheim is the classic short story version of the popular nursery rhyme, in which Peep gets help from a princess trapped as an owl, and some elves to recover her flock. It was published in My First Picture Book, Printed in colours by Kronheim (1875). There's an alternate version of the story by L. Frank Baum, Little Bo-Peep. You might enjoy reading the original Mother Goose's nursery rhyme, Little Bo Peep. 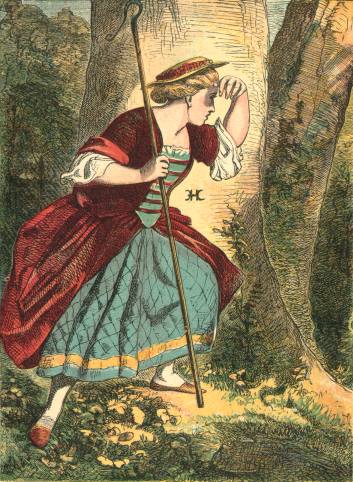 So runs the Nursery Rhyme. Little Bo-Peep was a very nice little girl. Her cheeks had a bloom on them like a lovely peach, and her voice sounded like a sweet silver bell.

But though Little Bo-Peep was as good as she was beautiful, she sometimes met with misfortunes that made her very sad. Once, when she lost her sheep, she was very doleful indeed. And this is how it happened.

One summer evening, when the sun was setting, Little Bo-Peep, who had to rise very early in the morning, felt tired, and sat down on a bank covered with daisies. Being very weary she soon fell fast asleep. Now the Bell-wether of Bo-Peep's flock was a most stupid and stubborn fellow. I dare say you know that all the sheep in a flock will follow the Bell-wether, and that he always wears a bell round his neck. It was a great pity, but the Bell-wether of Bo-Peep's flock was very wild, and was much given to wander far away into the wood, where of course the rest of the sheep would follow him.

Finding Little Bo-Peep asleep, the tiresome fellow began by standing on his hind legs and making a great bow to his shadow before him on the grass. After this he whirled himself round like a top, shaking his head all the time, and ringing his bell. 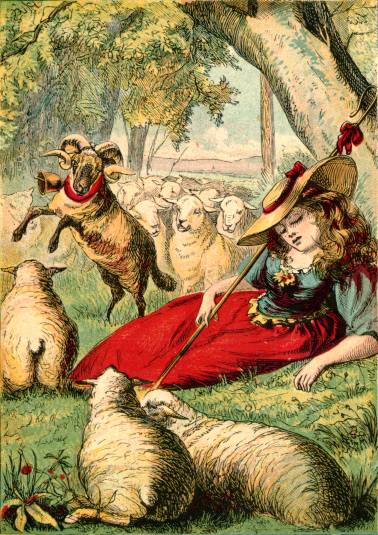 Very soon the rest of the flock began to dance and caper too. And when they had wheeled round their leader for a time, they ran off after him with a bound into the wood. Away they went, till they were quite tired out; and then they came to a stand-still, staring at their leader with very blank faces. But the Bell-wether looked foolish enough now, and did nothing but shake his head slowly and ring his bell, which seemed to say quite clearly, “You are lost, you are lost!”

When Little Bo-Peep awoke she found her sheep gone, and hardly knowing what she did, she walked on and on, far into the wood. She met some people with hoes and rakes in their hands, and asked them if they had seen her sheep. But they only laughed at her, and said, No. One man was very cross, and threatened to beat her. At last she came to a stile, on which an old Raven was perched. He looked so wise that Little Bo-Peep asked him whether he had seen a flock of sheep. But he only cried “Caw, caw, caw;” so Bo-Peep ran on again across the fields. 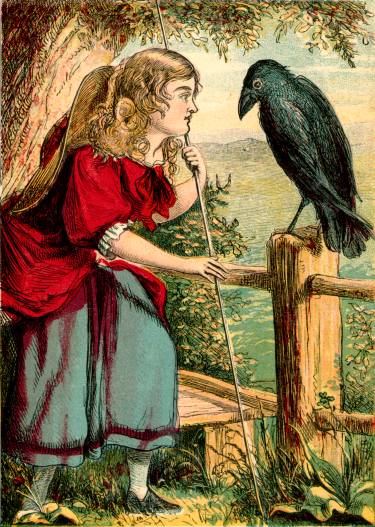 She wandered on till night-fall, and being faint with hunger, was very glad to see a light just before her. As she went on, she saw that it shone from a cottage window. But when she came to the door, it looked so dark and dismal that she was afraid to go in, and was just going to run away, when a cross-looking old woman came out, and dragged her into the cottage. She made her sit by the side of her son, who was a very ugly youth with a great red face and red hair. 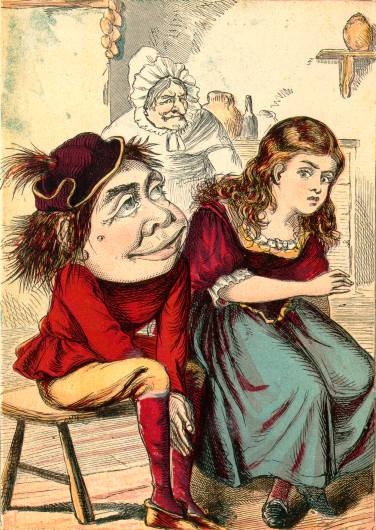 The old woman told him that she had brought Bo-Peep to be his wife, so Bo-Peep, who did not like him at all, ran away while they were asleep. But she did not know where to go, and gave herself up for lost, when she heard something cry, “tu-whit—tu-whoo,” in the tree above her. It was a great owl, which began flapping its wings with joy. Bo-Peep was frightened at first, but as the owl seemed very kind, she followed it. It took her to a cottage were there was plenty to eat and drink, and then, to Bo-Peep's great surprise, it began to speak, and told her this story:—

“Know, dear Maiden,” said the owl, “that I am the daughter of a King, and was a lovely Princess; but I was changed into an owl by the old woman at the cottage, because I would not marry her ugly son. But I have heard the fairies say that one day a lovely maiden, who would come into this wood to find her lost sheep, should be the means of my gaining my own form again. You are that pretty maid, and I will take you to a spot where you will find your sheep, but without their tails. The elves will play with them for this night, but in the morning every sheep will have its tail again, except the stupid Bell-wether. You must then wave his tail three times over my head, and I shall resume my shape again.”

The owl flew off, and led Bo-Peep into the wood, and said, “Sleep, maiden, I will watch.” How long she was asleep she could not tell, but the charmed spot was suddenly lighted up, and she saw the Queen of the Fairies seated on a bank. The Queen said the sheep should be punished for running away. She then saw all her sheep come trooping into the place, and on every sheep there was an Elf, who held in his hand a sheep's tail. 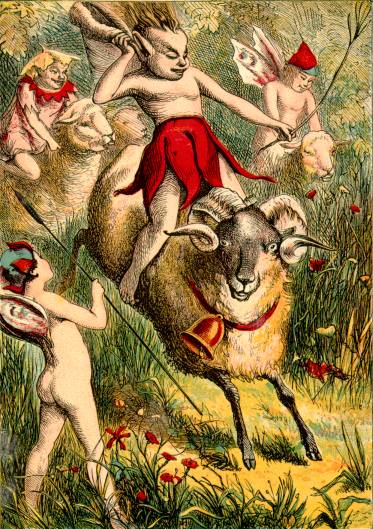 After riding them about for some time, and having great fun with them, the mad sport ceased, and each Elf restored the tail to his sheep—all but the Bell-wether's, which their leader hid in a tree. When Bo-Peep awoke, she saw the owl flapping its wings as if to remind her of her promise; so she fetched the tail, and waved it three times over its head, when up started the most charming Princess that ever was seen. The princess gave Bo-Peep a beautiful cottage, and her sheep never ran away from their kind mistress again. 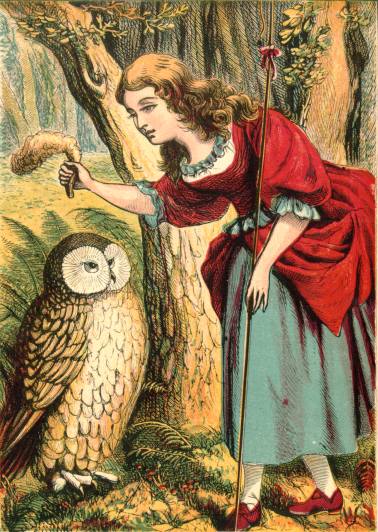 Return to the Joseph Martin Kronheim Home Page, or . . . Read the next short story; My First Alphabet