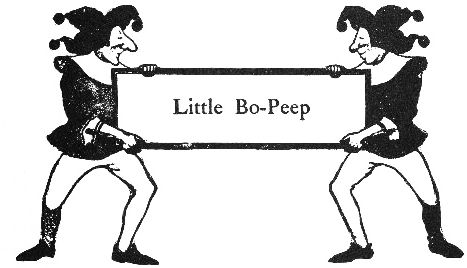 On the beautiful, undulating hills of Sussex feed many flocks of sheep, which are tended by many shepherds and shepherdesses, and one of these flocks used to be cared for by a poor woman who supported herself and her little girl by this means.

They lived in a small cottage nestled at the foot of one of the hills, and each morning the mother took her crook and started out with her sheep, that they might feed upon the tender, juicy grasses with which the hills abounded. The little girl usually accompanied her mother and sat by her side upon the grassy mounds and watched her care for the ewes and lambs, so that in time she herself grew to be a very proficient shepherdess.

So when the mother became too old and feeble to leave her cottage, Little Bo-Peep (as she was called) decided that she was fully able to manage the flocks herself. She was a little mite of a child, with flowing nut-brown locks and big gray eyes that charmed all who gazed into their innocent depths. She wore a light gray frock, fastened about the waist with a pretty pink sash, and there were white ruffles around her neck and pink ribbons in her hair.

All the shepherds and shepherdesses upon the hills, both young and old, soon came to know Little Bo-Peep very well indeed, and there were many willing hands to aid her if (which was not often) she needed their assistance.

Bo-Peep usually took her sheep to the side of a high hill above the cottage, and allowed them to eat the rich grass while she herself sat upon a mound and, laying aside her crook and her broad straw hat with its pink ribbons, devoted her time to sewing and mending stockings for her aged mother.

One day, while thus occupied, she heard a voice beside her say:

"Good morning, Little Bo-Peep!" and looking up the girl saw a woman standing near her and leaning upon a short stick. She was bent nearly double by weight of many years, her hair was white as snow and her eyes as black as coals. Deep wrinkles seamed her face and hands, while her nose and chin were so pointed that they nearly met. She was not pleasant to look upon, but Bo-Peep had learned to be polite to the aged, so she answered, sweetly,

"Good morning, mother. Can I do anything for you?"

"No, dearie," returned the woman, in a cracked voice, "but I will sit by your side and rest for a time."

The girl made room on the mound beside her, and the stranger sat down and watched in silence the busy fingers sew up the seams of the new frock she was making.

By and by the woman asked,

"Why do you come out here to sew?"

"Because I am a shepherdess," replied the girl.

"But where is your crook?"

"On the grass beside me."

"And where are your sheep?"

Bo-Peep looked up and could not see them.

"They must have strayed over the top of the hill," she said, "and I will go and seek them."

"Do not be in a hurry," croaked the old woman; "they will return presently without your troubling to find them."

"Of course; do not the sheep know you?"

"And do not you know the sheep?"

"I can call every one by name," said Bo-Peep, confidently; "for though I am so young a shepherdess I am fond of my sheep and know all about them."

The old woman chuckled softly, as if the answer amused her, and replied,

"No one knows all about anything, my dear."

"But I know all about my sheep," protested Little Bo-Peep.

"Do you, indeed? Then you are wiser that most people. And if you know all about them, you also know they will come home of their own accord, and I have no doubt they will all be wagging their tails behind them, as usual."

"Oh," said Little Bo-Peep, in surprise, "do they wag their tails? I never noticed that!"

"Indeed!" exclaimed the old woman, "then you are not very observing for one who knows all about sheep. Perhaps you have never noticed their tails at all."

"No," answered Bo-Peep, thoughtfully, "I do n't know that I ever have."

The woman laughed so hard at this reply that she began to cough, and this made the girl remember that her flock had strayed away.

"I really must go and find my sheep," she said, rising to her feet, "and then I shall be sure to notice their tails, and see if they wag them."

"Sit still, my child," said the old woman, "I am going over the hill-top myself, and I will send the sheep back to you."

So she got upon her feet and began climbing the hill, and the girl heard her saying, as she walked away,

"Little Bo-Peep has lost her sheep,
And does n't know where to find 'em.
But leave 'em alone, and they 'll come home,
All wagging their tails behind 'em."

Little Bo-Peep sat still and watched the old woman toil slowly up the hill-side and disappear over the top. By and by she thought, "very soon I shall see the sheep coming back;" but time passed away and still the errant flock failed to make its appearance.

Soon the head of the little shepherdess began to nod, and presently, still thinking of her sheep,

Little Bo-Peep fell fast asleep,
And dreamt she heard them bleating;
But when she awoke she found it a joke,
For still they were a-fleeting.

The girl now became quite anxious, and wondered why the old woman had not driven her flock over the hill. But as it was now time for luncheon she opened her little basket and ate of the bread and cheese and cookies she had brought with her. After she had finished her meal and taken a drink of cool water from a spring near by, she decided she would not wait any longer.

So up she took her little crook,
Determined for to find them,

and began climbing the hill.

When she got to the top there was never a sight of sheep about--only a green valley and another hill beyond.

Now really alarmed for the safety of her charge, Bo-Peep hurried into the valley and up the farther hill-side. Panting and tired she reached the summit, and, pausing breathlessly, gazed below her.

Quietly feeding upon the rich grass was her truant flock, looking as peaceful and innocent as if it had never strayed away from its gentle shepherdess.

Bo-Peep uttered a cry of joy and hurried toward them; but when she came near she stopped in amazement and held up her little hands with a pretty expression of dismay. She had

Found them, indeed, but it made her heart bleed,
For they 'd left their tails behind them!

Nothing was left to each sheep but a wee little stump where a tail should be, and Little Bo-Peep was so heart-broken that she sat down beside them and sobbed bitterly.

But after awhile the tiny maid realized that all her tears would not bring back the tails to her lambkins; so she plucked up courage and dried her eyes and arose from the ground just as the old woman hobbled up to her.

"So you have found your sheep, dearie," she said, in her cracked voice.

"Yes," replied Little Bo-Peep, with difficulty repressing a sob; "but look, mother! They 've all left their tails behind them!"

"Why, so they have!" exclaimed the old woman; and then she began to laugh as if something pleased her.

"What do you suppose has become of their tails?" asked the girl.

"Oh, some one has probably cut them off. They make nice tippets in winter-time, you know;" and then she patted the child upon her head and walked away down the valley.

Bo-Peep was much grieved over the loss that had befallen her dear sheep, and so, driving them before her, she wandered around to see if by any chance she could find the lost tails.

But soon the sun began to sink over the hill-tops, and she knew she must take her sheep home before night overtook them.

She did not tell her mother of her misfortune, for she feared the old shepherdess would scold her, and Bo-Peep had fully decided to seek for the tails and find them before she related the story of their loss to anyone.

Each day for many days after that Little Bo-Peep wandered about the hills seeking the tails of her sheep, and those who met her wondered what had happened to make the sweet little maid so anxious. But there is an end to all troubles, no matter how severe they may seem to be, and

It happened one day, as Bo-Peep did stray
Unto a meadow hard by,
There she espied their tails side by side.
All hung on a tree to dry!

The little shepherdess was overjoyed at this discovery, and, reaching up her crook, she knocked the row of pretty white tails off the tree and gathered them up in her frock. But how to fasten them onto her sheep again was the question, and after pondering the matter for a time she became discouraged, and, thinking she was no better off than before the tails were found, she began to weep and to bewail her misfortune.

But amidst her tears she bethought herself of her needle and thread.

"Why," she exclaimed, smiling again, "I can sew them on, of course!" Then

She heaved a sigh and wiped her eye
And ran o'er hill and dale, oh.
And tried what she could
As a shepherdess should,
To tack to each sheep its tail, oh.

But the very first sheep she came to refused to allow her to sew on the tail, and ran away from her, and the others did the same, so that finally she was utterly discouraged.

She was beginning to cry again, when the same old woman she had before met came hobbling to her side and asked,

"What are you doing with my cat tails?"

"Your cat tails!" replied Bo-Peep, in surprise; "what do you mean?"

"Why, these tails are all cut from white pussycats, and I put them on the tree to dry. What are you doing with them?"

"I thought they belonged to my sheep," answered Bo-Peep, sorrowfully; "but if they are really your pussy-cat tails, I must hunt until I find those that belong to my sheep."

"My dear," said the old woman, "I have been deceiving you; you said you knew all about your sheep, and I wanted to teach you a lesson. For, however wise we may be, no one in this world knows all about anything. Sheep do not have long tails--there is only a little stump to answer for a tail. Neither do rabbits have tails, nor bears, nor many other animals. And if you had been observing you would have known all this when I said the sheep would be wagging their tails behind them, and then you would not have passed all those days in searching for what is not to be found. So now, little one, run away home, and try to be more thoughtful in the future. Your sheep will never miss the tails, for they have never had them."

Little Bo-Peep no more did weep;
My tale of tails ends here.
Each cat has one,
But sheep have none;
Which, after all, is queer!