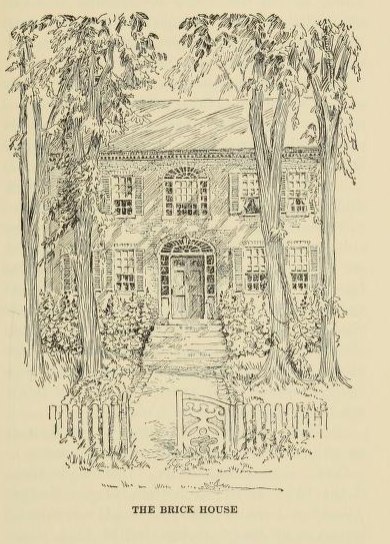 They had been called the Sawyer girls when Miranda at eighteen, Jane at twelve, and Aurelia at eight participated in the various activities of village life; and when Riverboro fell into a habit of thought or speech, it saw no reason for falling out of it, at any rate in the same century. So although Miranda and Jane were between fifty and sixty at the time this story opens, Riverboro still called them the Sawyer girls. They were spinsters; but Aurelia, the youngest, had made what she called a romantic marriage and what her sisters termed a mighty poor speculation. "There's worse things than bein' old maids," they said; whether they thought so is quite another matter.

The element of romance in Aurelia's marriage existed chiefly in the fact that Mr. L. D. M. Randall had a soul above farming or trading and was a votary of the Muses. He taught the weekly singing-school (then a feature of village life) in half a dozen neighboring towns, he played the violin and "called off" at dances, or evoked rich harmonies from church melodeons on Sundays. He taught certain uncouth lads, when they were of an age to enter society, the intricacies of contra dances, or the steps of the schottische and mazurka, and he was a marked figure in all social assemblies, though conspicuously absent from town-meetings and the purely masculine gatherings at the store or tavern or bridge.

His hair was a little longer, his hands a little whiter, his shoes a little thinner, his manner a trifle more polished, than that of his soberer mates; indeed the only department of life in which he failed to shine was the making of sufficient money to live upon. Luckily he had no responsibilities; his father and his twin brother had died when he was yet a boy, and his mother, whose only noteworthy achievement had been the naming of her twin sons Marquis de Lafayette and Lorenzo de Medici Randall, had supported herself and educated her child by making coats up to the very day of her death. She was wont to say plaintively, "I'm afraid the faculties was too much divided up between my twins. L. D. M. is awful talented, but I guess M. D. L. would 'a' ben the practical one if he'd 'a' lived."

"L. D. M. was practical enough to get the richest girl in the village," replied Mrs. Robinson.

Aurelia's share of the modest Sawyer property had been put into one thing after another by the handsome and luckless Lorenzo de Medici. He had a graceful and poetic way of making an investment for each new son and daughter that blessed their union. "A birthday present for our child, Aurelia," he would say,--"a little nest-egg for the future;" but Aurelia once remarked in a moment of bitterness that the hen never lived that could sit on those eggs and hatch anything out of them.

Miranda and Jane had virtually washed their hands of Aurelia when she married Lorenzo de Medici Randall. Having exhausted the resources of Riverboro and its immediate vicinity, the unfortunate couple had moved on and on in a steadily decreasing scale of prosperity until they had reached Temperance, where they had settled down and invited fate to do its worst, an invitation which was promptly accepted. The maiden sisters at home wrote to Aurelia two or three times a year, and sent modest but serviceable presents to the children at Christmas, but refused to assist L. D. M. with the regular expenses of his rapidly growing family. His last investment, made shortly before the birth of Miranda (named in a lively hope of favors which never came), was a small farm two miles from Temperance. Aurelia managed this herself, and so it proved a home at least, and a place for the unsuccessful Lorenzo to die and to be buried from, a duty somewhat too long deferred, many thought, which he performed on the day of Mira's birth.

It was in this happy-go-lucky household that Rebecca had grown up. It was just an ordinary family; two or three of the children were handsome and the rest plain, three of them rather clever, two industrious, and two commonplace and dull. Rebecca had her father's facility and had been his aptest pupil. She "carried" the alto by ear, danced without being taught, played the melodeon without knowing the notes. Her love of books she inherited chiefly from her mother, who found it hard to sweep or cook or sew when there was a novel in the house. Fortunately books were scarce, or the children might sometimes have gone ragged and hungry.

But other forces had been at work in Rebecca, and the traits of unknown forbears had been wrought into her fibre. Lorenzo de Medici was flabby and boneless; Rebecca was a thing of fire and spirit: he lacked energy and courage; Rebecca was plucky at two and dauntless at five. Mrs. Randall and Hannah had no sense of humor; Rebecca possessed and showed it as soon as she could walk and talk.

She had not been able, however, to borrow her parents' virtues and those of other generous ancestors and escape all the weaknesses in the calendar. She had not her sister Hannah's patience or her brother John's sturdy staying power. Her will was sometimes willfulness, and the ease with which she did most things led her to be impatient of hard tasks or long ones. But whatever else there was or was not, there was freedom at Randall's farm. The children grew, worked, fought, ate what and slept where they could; loved one another and their parents pretty well, but with no tropical passion; and educated themselves for nine months of the year, each one in his own way.

As a result of this method Hannah, who could only have been developed by forces applied from without, was painstaking, humdrum, and limited; while Rebecca, who apparently needed nothing but space to develop in, and a knowledge of terms in which to express herself, grew and grew and grew, always from within outward. Her forces of one sort and another had seemingly been set in motion when she was born; they needed no daily spur, but moved of their own accord--towards what no one knew, least of all Rebecca herself. The field for the exhibition of her creative instinct was painfully small, and the only use she had made of it as yet was to leave eggs out of the corn bread one day and milk another, to see how it would turn out; to part Fanny's hair sometimes in the middle, sometimes on the right, and sometimes on the left side; and to play all sorts of fantastic pranks with the children, occasionally bringing them to the table as fictitious or historical characters found in her favorite books. Rebecca amused her mother and her family generally, but she never was counted of serious importance, and though considered "smart" and old for her age, she was never thought superior in any way. Aurelia's experience of genius, as exemplified in the deceased Lorenzo de Medici led her into a greater admiration of plain, every-day common sense, a quality in which Rebecca, it must be confessed, seemed sometimes painfully deficient.

Hannah was her mother's favorite, so far as Aurelia could indulge herself in such recreations as partiality. The parent who is obliged to feed and clothe seven children on an income of fifteen dollars a month seldom has time to discriminate carefully between the various members of her brood, but Hannah at fourteen was at once companion and partner in all her mother's problems. She it was who kept the house while Aurelia busied herself in barn and field. Rebecca was capable of certain set tasks, such as keeping the small children from killing themselves and one another, feeding the poultry, picking up chips, hulling strawberries, wiping dishes; but she was thought irresponsible, and Aurelia, needing somebody to lean on (having never enjoyed that luxury with the gifted Lorenzo), leaned on Hannah. Hannah showed the result of this attitude somewhat, being a trifle careworn in face and sharp in manner; but she was a self-contained, well-behaved, dependable child, and that is the reason her aunts had invited her to Riverboro to be a member of their family and participate in all the advantages of their loftier position in the world. It was several years since Miranda and Jane had seen the children, but they remembered with pleasure that Hannah had not spoken a word during the interview, and it was for this reason that they had asked for the pleasure of her company. Rebecca, on the other hand, had dressed up the dog in John's clothes, and being requested to get the three younger children ready for dinner, she had held them under the pump and then proceeded to "smack" their hair flat to their heads by vigorous brushing, bringing them to the table in such a moist and hideous state of shininess that their mother was ashamed of their appearance. Rebecca's own black locks were commonly pushed smoothly off her forehead, but on this occasion she formed what I must perforce call by its only name, a spit-curl, directly in the centre of her brow, an ornament which she was allowed to wear a very short time, only in fact till Hannah was able to call her mother's attention to it, when she was sent into the next room to remove it and to come back looking like a Christian. This command she interpreted somewhat too literally perhaps, because she contrived in a space of two minutes an extremely pious style of hairdressing, fully as effective if not as startling as the first. These antics were solely the result of nervous irritation, a mood born of Miss Miranda Sawyer's stiff, grim, and martial attitude. The remembrance of Rebecca was so vivid that their sister Aurelia's letter was something of a shock to the quiet, elderly spinsters of the brick house; for it said that Hannah could not possibly be spared for a few years yet, but that Rebecca would come as soon as she could be made ready; that the offer was most thankfully appreciated, and that the regular schooling and church privileges, as well as the influence of the Sawyer home, would doubtless be "the making of Rebecca"