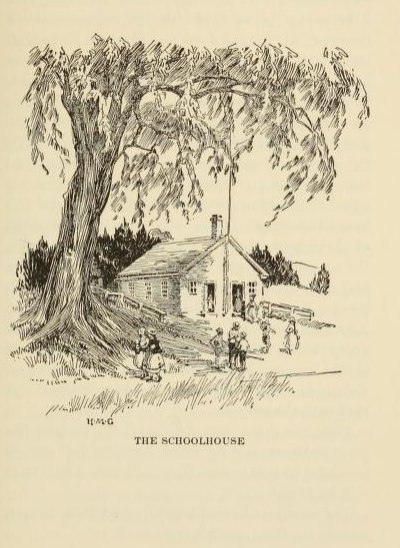 On the very next Friday after this "dreadfullest fight that ever was seen," as Bunyan says in Pilgrim's Progress, there were great doings in the little schoolhouse on the hill. Friday afternoon was always the time chosen for dialogues, songs, and recitations, but it cannot be stated that it was a gala day in any true sense of the word. Most of the children hated "speaking pieces;" hated the burden of learning them, dreaded the danger of breaking down in them. Miss Dearborn commonly went home with a headache, and never left her bed during the rest of the afternoon or evening; and the casual female parent who attended the exercises sat on a front bench with beads of cold sweat on her forehead, listening to the all-too-familiar halts and stammers. Sometimes a bellowing infant who had clean forgotten his verse would cast himself bodily on the maternal bosom and be borne out into the open air, where he was sometimes kissed and occasionally spanked; but in any case the failure added an extra dash of gloom and dread to the occasion. The advent of Rebecca had somehow infused a new spirit into these hitherto terrible afternoons. She had taught Elijah and Elisha Simpson so that they recited three verses of something with such comical effect that they delighted themselves, the teacher, and the school; while Susan, who lisped, had been provided with a humorous poem in which she impersonated a lisping child. Emma Jane and Rebecca had a dialogue, and the sense of companionship buoyed up Emma Jane and gave her self- reliance. In fact, Miss Dearborn announced on this particular Friday morning that the exercises promised to be so interesting that she had invited the doctor's wife, the minister's wife, two members of the school committee, and a few mothers. Living Perkins was asked to decorate one of the black- boards and Rebecca the other. Living, who was the star artist of the school, chose the map of North America. Rebecca liked better to draw things less realistic, and speedily, before the eyes of the enchanted multitude, there grew under her skillful fingers an American flag done in red, white, and blue chalk, every star in its right place, every stripe fluttering in the breeze. Beside this appeared a figure of Columbia, copied from the top of the cigar box that held the crayons.

Miss Dearborn was delighted. "I propose we give Rebecca a good hand-clapping for such a beautiful picture--one that the whole school may well be proud of!"

Rebecca's heart leaped for joy, and to her confusion she felt the tears rising in her eyes. She could hardly see the way back to her seat, for in her ignorant lonely little life she had never been singled out for applause, never lauded, nor crowned, as in this wonderful, dazzling moment. If "nobleness enkindleth nobleness," so does enthusiasm beget enthusiasm, and so do wit and talent enkindle wit and talent. Alice Robinson proposed that the school should sing Three Cheers for the Red, White, and Blue! and when they came to the chorus, all point to Rebecca's flag. Dick Carter suggested that Living Perkins and Rebecca Randall should sign their names to their pictures, so that the visitors would know who drew them. Huldah Meserve asked permission to cover the largest holes in the plastered walls with boughs and fill the water pail with wild flowers. Rebecca's mood was above and beyond all practical details. She sat silent, her heart so full of grateful joy that she could hardly remember the words of her dialogue. At recess she bore herself modestly, notwithstanding her great triumph, while in the general atmosphere of good will the Smellie-Randall hatchet was buried and Minnie gathered maple boughs and covered the ugly stove with them, under Rebecca's direction.

Miss Dearborn dismissed the morning session at quarter to twelve, so that those who lived near enough could go home for a change of dress. Emma Jane and Rebecca ran nearly every step of the way, from sheer excitement, only stopping to breathe at the stiles.

"Will your aunt Mirandy let you wear your best, or only your buff calico?" asked Emma Jane.

"I think I'll ask aunt Jane," Rebecca replied. "Oh! if my pink was only finished! I left aunt Jane making the buttonholes!"

"I'm going to ask my mother to let me wear her garnet ring," said Emma Jane. "It would look perfectly elergant flashing in the sun when I point to the flag. Good-by; don't wait for me going back; I may get a ride."

Rebecca found the side door locked, but she knew that the key was under the step, and so of course did everybody else in Riverboro, for they all did about the same thing with it. She unlocked the door and went into the dining-room to find her lunch laid on the table and a note from aunt Jane saying that they had gone to Moderation with Mrs. Robinson in her carryall. Rebecca swallowed a piece of bread and butter, and flew up the front stairs to her bedroom. On the bed lay the pink gingham dress finished by aunt Jane's kind hands. Could she, dare she, wear it without asking? Did the occasion justify a new costume, or would her aunts think she ought to keep it for the concert?

"I'll wear it," thought Rebecca. "They're not here to ask, and maybe they wouldn't mind a bit; it's only gingham after all, and wouldn't be so grand if it wasn't new, and hadn't tape trimming on it, and wasn't pink."

She unbraided her two pigtails, combed out the waves of her hair and tied them back with a ribbon, changed her shoes, and then slipped on the pretty frock, managing to fasten all but the three middle buttons, which she reserved for Emma Jane.

Then her eye fell on her cherished pink sunshade, the exact match, and the girls had never seen it. It wasn't quite appropriate for school, but she needn't take it into the room; she would wrap it in a piece of paper, just show it, and carry it coming home. She glanced in the parlor looking-glass downstairs and was electrified at the vision. It seemed almost as if beauty of apparel could go no further than that heavenly pink gingham dress! The sparkle of her eyes, glow of her cheeks, sheen of her falling hair, passed unnoticed in the all- conquering charm of the rose-colored garment. Goodness! it was twenty minutes to one and she would be late. She danced out the side door, pulled a pink rose from a bush at the gate, and covered the mile between the brick house and the seat of learning in an incredibly short time, meeting Emma Jane, also breathless and resplendent, at the entrance.

"Rebecca Randall!" exclaimed Emma Jane, "you're handsome as a picture!"

"I?" laughed Rebecca "Nonsense! it's only the pink gingham."

"You're not good looking every day," insisted Emma Jane; "but you're different somehow. See my garnet ring; mother scrubbed it in soap and water. How on earth did your aunt Mirandy let you put on your bran' new dress?"

"They were both away and I didn't ask," Rebecca responded anxiously. "Why? Do you think they'd have said no?"

"Ye--es; but this afternoon is very special-- almost like a Sunday-school concert."

"Yes," assented Emma Jane, "it is, of course; with your name on the board, and our pointing to your flag, and our elergant dialogue, and all that."

The afternoon was one succession of solid triumphs for everybody concerned. There were no real failures at all, no tears, no parents ashamed of their offspring. Miss Dearborn heard many admiring remarks passed upon her ability, and wondered whether they belonged to her or partly, at least, to Rebecca. The child had no more to do than several others, but she was somehow in the foreground. It transpired afterwards at various village entertainments that Rebecca couldn't be kept in the background; it positively refused to hold her. Her worst enemy could not have called her pushing. She was ready and willing and never shy; but she sought for no chances of display and was, indeed, remarkably lacking in self-consciousness, as well as eager to bring others into whatever fun or entertainment there was. If wherever the MacGregor sat was the head of the table, so in the same way wherever Rebecca stood was the centre of the stage. Her clear high treble soared above all the rest in the choruses, and somehow everybody watched her, took note of her gestures, her whole-souled singing, her irrepressible enthusiasm.

Finally it was all over, and it seemed to Rebecca as if she should never be cool and calm again, as she loitered on the homeward path. There would be no lessons to learn to-night, and the vision of helping with the preserves on the morrow had no terrors for her--fears could not draw breath in the radiance that flooded her soul. There were thick gathering clouds in the sky, but she took no note of them save to be glad that she could raise her sunshade. She did not tread the solid ground at all, or have any sense of belonging to the common human family, until she entered the side yard of the brick house and saw her aunt Miranda standing in the open doorway. Then with a rush she came back to earth.