Chapter XI: "The Stirring of the Powers" 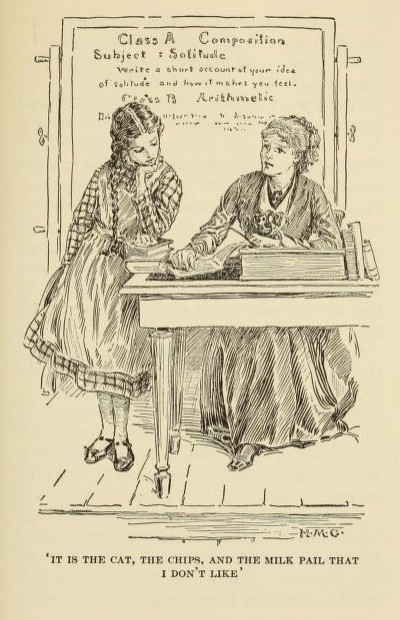 Rebecca's visit to Milltown was all that her glowing fancy had painted it, except that recent readings about Rome and Venice disposed her to believe that those cities might have an advantage over Milltown in the matter of mere pictorial beauty. So soon does the soul outgrow its mansions that after once seeing Milltown her fancy ran out to the future sight of Portland; for that, having islands and a harbor and two public monuments, must be far more beautiful than Milltown, which would, she felt, take its proud place among the cities of the earth, by reason of its tremendous business activity rather than by any irresistible appeal to the imagination.

It would be impossible for two children to see more, do more, walk more, talk more, eat more, or ask more questions than Rebecca and Emma Jane did on that eventful Wednesday.

"She's the best company I ever see in all my life," said Mrs. Cobb to her husband that evening. "We ain't had a dull minute this day. She's well- mannered, too; she didn't ask for anything, and was thankful for whatever she got. Did you watch her face when we went into that tent where they was actin' out Uncle Tom's Cabin? And did you take notice of the way she told us about the book when we sat down to have our ice cream? I tell you Harriet Beecher Stowe herself couldn't 'a' done it better justice."

"I took it all in," responded Mr. Cobb, who was pleased that "mother" agreed with him about Rebecca. "I ain't sure but she's goin' to turn out somethin' remarkable,--a singer, or a writer, or a lady doctor like that Miss Parks up to Cornish."

"Lady doctors are always home'paths, ain't they?" asked Mrs. Cobb, who, it is needless to say, was distinctly of the old school in medicine.

"Land, no, mother; there ain't no home'path 'bout Miss Parks--she drives all over the country."

"I can't see Rebecca as a lady doctor, somehow," mused Mrs. Cobb. "Her gift o' gab is what's goin' to be the makin' of her; mebbe she'll lecture, or recite pieces, like that Portland elocutionist that come out here to the harvest supper."

"I guess she'll be able to write down her own pieces," said Mr. Cobb confidently; "she could make 'em up faster 'n she could read 'em out of a book."

"It's a pity she's so plain looking," remarked Mrs. Cobb, blowing out the candle.

"Plain looking, mother?" exclaimed her husband in astonishment. "Look at the eyes of her; look at the hair of her, an' the smile, an' that there dimple! Look at Alice Robinson, that's called the prettiest child on the river, an' see how Rebecca shines her ri' down out o' sight! I hope Mirandy'll favor her comin' over to see us real often, for she'll let off some of her steam here, an' the brick house'll be consid'able safer for everybody concerned. We've known what it was to hev children, even if 't was more 'n thirty years ago, an' we can make allowances."

Notwithstanding the encomiums of Mr. and Mrs. Cobb, Rebecca made a poor hand at composition writing at this time. Miss Dearborn gave her every sort of subject that she had ever been given herself: Cloud Pictures; Abraham Lincoln; Nature; Philanthropy; Slavery; Intemperance; Joy and Duty; Solitude; but with none of them did Rebecca seem to grapple satisfactorily.

"Write as you talk, Rebecca," insisted poor Miss Dearborn, who secretly knew that she could never manage a good composition herself.

"But gracious me, Miss Dearborn! I don't talk about nature and slavery. I can't write unless I have something to say, can I?"

"That is what compositions are for," returned Miss Dearborn doubtfully; "to make you have things to say. Now in your last one, on solitude, you haven't said anything very interesting, and you've made it too common and every-day to sound well. There are too many `yous' and `yours' in it; you ought to say `one' now and then, to make it seem more like good writing. `One opens a favorite book;' `One's thoughts are a great comfort in solitude,' and so on."

"I don't know any more about solitude this week than I did about joy and duty last week," grumbled Rebecca.

"You tried to be funny about joy and duty," said Miss Dearborn reprovingly; "so of course you didn't succeed."

"I didn't know you were going to make us read the things out loud," said Rebecca with an embarrassed smile of recollection.

"Joy and Duty" had been the inspiring subject given to the older children for a theme to be written in five minutes.

Rebecca had wrestled, struggled, perspired in vain. When her turn came to read she was obliged to confess she had written nothing.

"You have at least two lines, Rebecca," insisted the teacher, "for I see them on your slate."

"I'd rather not read them, please; they are not good," pleaded Rebecca.

"Read what you have, good or bad, little or much; I am excusing nobody."

Rebecca rose, overcome with secret laughter dread, and mortification; then in a low voice she read the couplet:--

When Joy and Duty clash Let Duty go to smash.

Dick Carter's head disappeared under the desk, while Living Perkins choked with laughter.

Miss Dearborn laughed too; she was little more than a girl, and the training of the young idea seldom appealed to the sense of humor.

"You must stay after school and try again, Rebecca," she said, but she said it smilingly. "Your poetry hasn't a very nice idea in it for a good little girl who ought to love duty."

"It wasn't MY idea," said Rebecca apologetically. "I had only made the first line when I saw you were going to ring the bell and say the time was up. I had `clash' written, and I couldn't think of anything then but `hash' or `rash' or `smash.' I'll change it to this:--

When Joy and Duty clash, 'T is Joy must go to smash."

"That is better," Miss Dearborn answered, "though I cannot think `going to smash' is a pretty expression for poetry."

Having been instructed in the use of the indefinite pronoun "one" as giving a refined and elegant touch to literary efforts, Rebecca painstakingly rewrote her composition on solitude, giving it all the benefit of Miss Dearborn's suggestion. It then appeared in the following form, which hardly satisfied either teacher or pupil:--

It would be false to say that one could ever be alone when one has one's lovely thoughts to comfort one. One sits by one's self, it is true, but one thinks; one opens one's favorite book and reads one's favorite story; one speaks to one's aunt or one's brother, fondles one's cat, or looks at one's photograph album. There is one's work also: what a joy it is to one, if one happens to like work. All one's little household tasks keep one from being lonely. Does one ever feel bereft when one picks up one's chips to light one's fire for one's evening meal? Or when one washes one's milk pail before milking one's cow? One would fancy not. R. R. R.

"It is perfectly dreadful," sighed Rebecca when she read it aloud after school. "Putting in `one' all the time doesn't make it sound any more like a book, and it looks silly besides."

"You say such queer things," objected Miss Dearborn. "I don't see what makes you do it. Why did you put in anything so common as picking up chips?"

"Because I was talking about `household tasks' in the sentence before, and it IS one of my household tasks. Don't you think calling supper `one's evening meal' is pretty? and isn't `bereft' a nice word?"

"Yes, that part of it does very well. It is the cat, the chips, and the milk pail that I don't like."

"All right!" sighed Rebecca. "Out they go; Does the cow go too?"

"Yes, I don't like a cow in a composition," said the difficult Miss Dearborn.

The Milltown trip had not been without its tragic consequences of a small sort; for the next week Minnie Smellie's mother told Miranda Sawyer that she'd better look after Rebecca, for she was given to "swearing and profane language;" that she had been heard saying something dreadful that very afternoon, saying it before Emma Jane and Living Perkins, who only laughed and got down on all fours and chased her.

Rebecca, on being confronted and charged with the crime, denied it indignantly, and aunt Jane believed her.

"Search your memory, Rebecca, and try to think what Minnie overheard you say," she pleaded. "Don't be ugly and obstinate, but think real hard. When did they chase you up the road, and what were you doing?"

"Oh! I see it now," she exclaimed. "It had rained hard all the morning, you know, and the road was full of puddles. Emma Jane, Living, and I were walking along, and I was ahead. I saw the water streaming over the road towards the ditch, and it reminded me of Uncle Tom's Cabin at Milltown, when Eliza took her baby and ran across the Mississippi on the ice blocks, pursued by the bloodhounds. We couldn't keep from laughing after we came out of the tent because they were acting on such a small platform that Eliza had to run round and round, and part of the time the one dog they had pursued her, and part of the time she had to pursue the dog. I knew Living would remember, too, so I took off my waterproof and wrapped it round my books for a baby; then I shouted, `My god! The river!' just like that--the same as Eliza did in the play; then I leaped from puddle to puddle, and Living and Emma Jane pursued me like the bloodhounds. It's just like that stupid Minnie Smellie who doesn't know a game when she sees one. And Eliza wasn't swearing when she said `My God! the river!' It was more like praying."

"Well, you've got no call to be prayin', any more than swearin', in the middle of the road," said Miranda; "but I'm thankful it's no worse. You're born to trouble as the sparks fly upward, an' I'm afraid you allers will be till you learn to bridle your unruly tongue."

"I wish sometimes that I could bridle Minnie's," murmured Rebecca, as she went to set the table for supper.

"I declare she IS the beatin'est child!" said Miranda, taking off her spectacles and laying down her mending. "You don't think she's a leetle mite crazy, do you, Jane?"

"I don't think she's like the rest of us," responded Jane thoughtfully and with some anxiety in her pleasant face; "but whether it's for the better or the worse I can't hardly tell till she grows up. She's got the making of 'most anything in her, Rebecca has; but I feel sometimes as if we were not fitted to cope with her."

"Stuff an' nonsense!" said Miranda "Speak for yourself. I feel fitted to cope with any child that ever was born int' the world!"

"I know you do, Mirandy; but that don't make you so," returned Jane with a smile.

The habit of speaking her mind freely was certainly growing on Jane to an altogether terrifying extent.