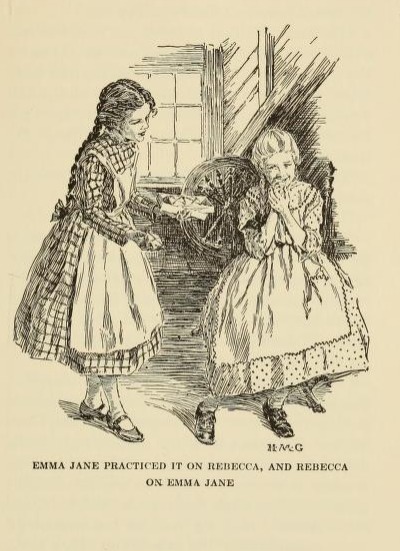 Just before Thanksgiving the affairs of the Simpsons reached what might have been called a crisis, even in their family, which had been born and reared in a state of adventurous poverty and perilous uncertainty.

Riverboro was doing its best to return the entire tribe of Simpsons to the land of its fathers, so to speak, thinking rightly that the town which had given them birth, rather than the town of their adoption, should feed them and keep a roof over their heads until the children were of an age for self- support. There was little to eat in the household and less to wear, though Mrs. Simpson did, as always, her poor best. The children managed to satisfy their appetites by sitting modestly outside their neighbors' kitchen doors when meals were about to be served. They were not exactly popular favorites, but they did receive certain undesirable morsels from the more charitable housewives.

Life was rather dull and dreary, however, and in the chill and gloom of November weather, with the vision of other people's turkeys bursting with fat, and other people's golden pumpkins and squashes and corn being garnered into barns, the young Simpsons groped about for some inexpensive form of excitement, and settled upon the selling of soap for a premium. They had sold enough to their immediate neighbors during the earlier autumn to secure a child's handcart, which, though very weak on its pins, could be trundled over the country roads. With large business sagacity and an executive capacity which must have been inherited from their father, they now proposed to extend their operations to a larger area and distribute soap to contiguous villages, if these villages could be induced to buy. The Excelsior Soap Company paid a very small return of any kind to its infantile agents, who were scattered through the state, but it inflamed their imaginations by the issue of circulars with highly colored pictures of the premiums to be awarded for the sale of a certain number of cakes. It was at this juncture that Clara Belle and Susan Simpson consulted Rebecca, who threw herself solidly and wholeheartedly into the enterprise, promising her help and that of Emma Jane Perkins. The premiums within their possible grasp were three: a bookcase, a plush reclining chair, and a banquet lamp. Of course the Simpsons had no books, and casting aside, without thought or pang, the plush chair, which might have been of some use in a family of seven persons (not counting Mr. Simpson, who ordinarily sat elsewhere at the town's expense), they warmed themselves rapturously in the vision of the banquet lamp, which speedily be- came to them more desirable than food, drink, or clothing. Neither Emma Jane nor Rebecca perceived anything incongruous in the idea of the Simpsons striving for a banquet lamp. They looked at the picture daily and knew that if they themselves were free agents they would toil, suffer, ay sweat, for the happy privilege of occupying the same room with that lamp through the coming winter evenings. It looked to be about eight feet tall in the catalogue, and Emma Jane advised Clara Belle to measure the height of the Simpson ceilings; but a note in the margin of the circular informed them that it stood two and a half feet high when set up in all its dignity and splendor on a proper table, three dollars extra. It was only of polished brass, continued the circular, though it was invariably mistaken for solid gold, and the shade that accompanied it (at least it accompanied it if the agent sold a hundred extra cakes) was of crinkled crepe paper printed in a dozen delicious hues, from which the joy-dazzled agent might take his choice.

Seesaw Simpson was not in the syndicate. Clara Belle was rather a successful agent, but Susan, who could only say "thoap," never made large returns, and the twins, who were somewhat young to be thoroughly trustworthy, could be given only a half dozen cakes at a time, and were obliged to carry with them on their business trips a brief document stating the price per cake, dozen, and box. Rebecca and Emma Jane offered to go two or three miles in some one direction and see what they could do in the way of stirring up a popular demand for the Snow-White and Rose-Red brands, the former being devoted to laundry purposes and the latter being intended for the toilet.

There was a great amount of hilarity in the preparation for this event, and a long council in Emma Jane's attic. They had the soap company's circular from which to arrange a proper speech, and they had, what was still better, the remembrance of a certain patent-medicine vender's discourse at the Milltown Fair. His method, when once observed, could never be forgotten; nor his manner, nor his vocabulary. Emma Jane practiced it on Rebecca, and Rebecca on Emma Jane.

"Can I sell you a little soap this afternoon? It is called the Snow-White and Rose-Red Soap, six cakes in an ornamental box, only twenty cents for the white, twenty-five cents for the red. It is made from the purest ingredients, and if desired could be eaten by an invalid with relish and profit."

"It takes so little to make you feel like a fool, Emma Jane," rebuked Rebecca, "that sometimes I think that you must BE one I don't get to feeling like a fool so awfully easy; now leave out that eating part if you don't like it, and go on."

"The Snow-White is probably the most remarkable laundry soap ever manufactured. Immerse the garments in a tub, lightly rubbing the more soiled portions with the soap; leave them submerged in water from sunset to sunrise, and then the youngest baby can wash them without the slightest effort."

"Babe, not baby," corrected Rebecca from the circular.

"Of course it's just the same thing; but a baby has got to be called babe or infant in a circular, the same as it is in poetry! Would you rather say infant?"

"No," grumbled Emma Jane; "infant is worse even than babe. Rebecca, do you think we'd better do as the circular says, and let Elijah or Elisha try the soap before we begin selling?"

"I can't imagine a babe doing a family wash with any soap," answered Rebecca; "but it must be true or they would never dare to print it, so don't let's bother. Oh! won't it be the greatest fun, Emma Jane? At some of the houses--where they can't possibly know me--I shan't be frightened, and I shall reel off the whole rigmarole, invalid, babe, and all. Perhaps I shall say even the last sentence, if I can remember it: `We sound every chord in the great mac-ro-cosm of satisfaction."

This conversation took place on a Friday afternoon at Emma Jane's house, where Rebecca, to her unbounded joy, was to stay over Sunday, her aunts having gone to Portland to the funeral of an old friend. Saturday being a holiday, they were going to have the old white horse, drive to North Riverboro three miles away, eat a twelve o'clock dinner with Emma Jane's cousins, and be back at four o'clock punctually.

When the children asked Mrs. Perkins if they could call at just a few houses coming and going, and sell a little soap for the Simpsons, she at first replied decidedly in the negative. She was an indulgent parent, however, and really had little objection to Emma Jane amusing herself in this unusual way; it was only for Rebecca, as the niece of the difficult Miranda Sawyer, that she raised scruples; but when fully persuaded that the enterprise was a charitable one, she acquiesced.

The girls called at Mr. Watson's store, and arranged for several large boxes of soap to be charged to Clara Belle Simpson's account. These were lifted into the back of the wagon, and a happier couple never drove along the country road than Rebecca and her companion. It was a glorious Indian summer day, which suggested nothing of Thanksgiving, near at hand as it was. It was a rustly day, a scarlet and buff, yellow and carmine, bronze and crimson day. There were still many leaves on the oaks and maples, making a goodly show of red and brown and gold. The air was like sparkling cider, and every field had its heaps of yellow and russet good things to eat, all ready for the barns, the mills, and the markets. The horse forgot his twenty years, sniffed the sweet bright air, and trotted like a colt; Nokomis Mountain looked blue and clear in the distance; Rebecca stood in the wagon, and apostrophized the landscape with sudden joy of living:--

Dull Emma Jane had never seemed to Rebecca so near, so dear, so tried and true; and Rebecca, to Emma Jane's faithful heart, had never been so brilliant, so bewildering, so fascinating, as in this visit together, with its intimacy, its freedom, and the added delights of an exciting business enterprise.

A gorgeous leaf blew into the wagon.

"Does color make you sort of dizzy?" asked Rebecca.

"Perhaps dizzy isn't just the right word, but it's nearest. I'd like to eat color, and drink it, and sleep in it. If you could be a tree, which one would you choose?"

Emma Jane had enjoyed considerable experience of this kind, and Rebecca had succeeded in unstopping her ears, ungluing her eyes, and loosening her tongue, so that she could "play the game" after a fashion.

"I'd rather be an apple-tree in blossom,--that one that blooms pink, by our pig-pen."

Rebecca laughed. There was always something unexpected in Emma Jane's replies. "I'd choose to be that scarlet maple just on the edge of the pond there,"--and she pointed with the whip. "Then I could see so much more than your pink apple-tree by the pig-pen. I could look at all the rest of the woods, see my scarlet dress in my beautiful looking-glass, and watch all the yellow and brown trees growing upside down in the water. When I'm old enough to earn money, I'm going to have a dress like this leaf, all ruby color--thin, you know, with a sweeping train and ruffly, curly edges; then I think I'll have a brown sash like the trunk of the tree, and where could I be green? Do they have green petticoats, I wonder? I'd like a green petticoat coming out now and then underneath to show what my leaves were like before I was a scarlet maple."

"I think it would be awful homely," said Emma Jane. "I'm going to have a white satin with a pink sash, pink stockings, bronze slippers, and a spangled fan."