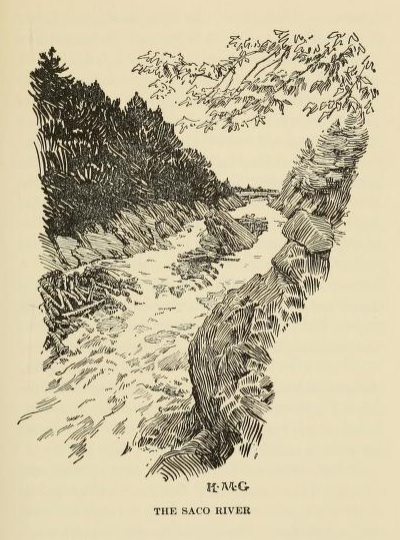 The first happy year at Wareham, with its widened sky-line, its larger vision, its greater opportunity, was over and gone. Rebecca had studied during the summer vacation, and had passed, on her return in the autumn, certain examinations which would enable her, if she carried out the same programme the next season, to complete the course in three instead of four years. She came off with no flying colors,--that would have been impossible in consideration of her inadequate training; but she did wonderfully well in some of the required subjects, and so brilliantly in others that the average was respectable. She would never have been a remarkable scholar under any circumstances, perhaps, and she was easily out- stripped in mathematics and the natural sciences by a dozen girls, but in some inexplicable way she became, as the months went on, the foremost figure in the school. When she had entirely forgotten the facts which would enable her to answer a question fully and conclusively, she commonly had some original theory to expound; it was not always correct, but it was generally unique and sometimes amusing. She was only fair in Latin or French grammar, but when it came to translation, her freedom, her choice of words, and her sympathetic understanding of the spirit of the text made her the delight of her teachers and the despair of her rivals.

"She can be perfectly ignorant of a subject,' said Miss Maxwell to Adam Ladd, "but entirely intelligent the moment she has a clue. Most of the other girls are full of information and as stupid as sheep."

Rebecca's gifts had not been discovered save by the few, during the first year, when she was adjusting herself quietly to the situation. She was distinctly one of the poorer girls; she had no fine dresses to attract attention, no visitors, no friends in the town. She had more study hours, and less time, therefore, for the companionship of other girls, gladly as she would have welcomed the gayety of that side of school life. Still, water will find its own level in some way, and by the spring of the second year she had naturally settled into the same sort of leadership which had been hers in the smaller community of Riverboro. She was unanimously elected assistant editor of the Wareham School Pilot, being the first girl to assume that enviable, though somewhat arduous and thankless position, and when her maiden number went to the Cobbs, uncle Jerry and aunt Sarah could hardly eat or sleep for pride.

"She'll always get votes," said Huldah Meserve, when discussing the election, "for whether she knows anything or not, she looks as if she did, and whether she's capable of filling an office or not, she looks as if she was. I only wish I was tall and dark and had the gift of making people believe I was great things, like Rebecca Randall. There's one thing: though the boys call her handsome, you notice they don't trouble her with much attention."

It was a fact that Rebecca's attitude towards the opposite sex was still somewhat indifferent and oblivious, even for fifteen and a half! No one could look at her and doubt that she had potentialities of attraction latent within her somewhere, but that side of her nature was happily biding its time. A human being is capable only of a certain amount of activity at a given moment, and it will inevitably satisfy first its most pressing needs, its most ardent desires, its chief ambitions. Rebecca was full of small anxieties and fears, for matters were not going well at the brick house and were anything but hopeful at the home farm. She was overbusy and overtaxed, and her thoughts were naturally drawn towards the difficult problems of daily living.

It had seemed to her during the autumn and winter of that year as if her aunt Miranda had never been, save at the very first, so censorious and so fault-finding. One Saturday Rebecca ran upstairs and, bursting into a flood of tears, exclaimed, "Aunt Jane, it seems as if I never could stand her continual scoldings. Nothing I can do suits aunt Miranda; she's just said it will take me my whole life to get the Randall out of me, and I'm not convinced that I want it all out, so there we are!"

Aunt Jane, never demonstrative, cried with Rebecca as she attempted to soothe her.

"You must be patient," she said, wiping first her own eyes and then Rebecca's. "I haven't told you, for it isn't fair you should be troubled when you're studying so hard, but your aunt Miranda isn't well. One Monday morning about a month ago, she had a kind of faint spell; it wasn't bad, but the doctor is afraid it was a shock, and if so, it's the beginning of the end. Seems to me she's failing right along, and that's what makes her so fretful and easy vexed. She has other troubles too, that you don't know anything about, and if you're not kind to your aunt Miranda now, child, you'll be dreadful sorry some time."

All the temper faded from Rebecca's face, and she stopped crying to say penitently, "Oh! the poor dear thing! I won't mind a bit what she says now. She's just asked me for some milk toast and I was dreading to take it to her, but this will make everything different. Don't worry yet, aunt Jane, for perhaps it won't be as bad as you think."

So when she carried the toast to her aunt a little later, it was in the best gilt-edged china bowl, with a fringed napkin on the tray and a sprig of geranium lying across the salt cellar.

"Now, aunt Miranda," she said cheerily, "I expect you to smack your lips and say this is good; it's not Randall, but Sawyer milk toast."

"You've tried all kinds on me, one time an' another," Miranda answered. "This tastes real kind o' good; but I wish you hadn't wasted that nice geranium."

"You can't tell what's wasted," said Rebecca philosophically; "perhaps that geranium has been hoping this long time it could brighten somebody's supper, so don't disappoint it by making believe you don't like it. I've seen geraniums cry,--in the very early morning!"

The mysterious trouble to which Jane had alluded was a very real one, but it was held in profound secrecy. Twenty-five hundred dollars of the small Sawyer property had been invested in the business of a friend of their father's, and had returned them a regular annual income of a hundred dollars. The family friend had been dead for some five years, but his son had succeeded to his interests and all went on as formerly. Suddenly there came a letter saying that the firm had gone into bankruptcy, that the business had been completely wrecked, and that the Sawyer money had been swept away with everything else.

The loss of one hundred dollars a year is a very trifling matter, but it made all the difference between comfort and self-denial to the two old spinsters Their manner of life had been so rigid and careful that it was difficult to economize any further, and the blow had fallen just when it was most inconvenient, for Rebecca's school and boarding expenses, small as they were, had to be paid promptly and in cash.

"Can we possibly go on doing it? Shan't we have to give up and tell her why?" asked Jane tearfully of the elder sister.

"We have put our hand to the plough, and we can't turn back," answered Miranda in her grimmest tone; "we've taken her away from her mother and offered her an education, and we've got to keep our word. She's Aurelia's only hope for years to come, to my way o' thinkin'. Hannah's beau takes all her time 'n' thought, and when she gits a husband her mother'll be out o' sight and out o' mind. John, instead of farmin', thinks he must be a doctor,-- as if folks wasn't gettin' unhealthy enough these days, without turnin' out more young doctors to help 'em into their graves. No, Jane; we'll skimp 'n' do without, 'n' plan to git along on our interest money somehow, but we won't break into our principal, whatever happens."

"Breaking into the principal" was, in the minds of most thrifty New England women, a sin only second to arson, theft, or murder; and, though the rule was occasionally carried too far for common sense,--as in this case, where two elderly women of sixty might reasonably have drawn something from their little hoard in time of special need,--it doubtless wrought more of good than evil in the community.

Rebecca, who knew nothing of their business affairs, merely saw her aunts grow more and more saving, pinching here and there, cutting off this and that relentlessly. Less meat and fish were bought; the woman who had lately been coming two days a week for washing, ironing, and scrubbing was dismissed; the old bonnets of the season before were brushed up and retrimmed; there were no drives to Moderation or trips to Portland. Economy was carried to its very extreme; but though Miranda was well-nigh as gloomy and uncompromising in her manner and conversation as a woman could well be, she at least never twitted her niece of being a burden; so Rebecca's share of the Sawyers' misfortunes consisted only in wearing her old dresses, hats, and jackets, without any apparent hope of a change.

There was, however, no concealing the state of things at Sunnybrook, where chapters of accidents had unfolded themselves in a sort of serial story that had run through the year. The potato crop had failed; there were no apples to speak of; the hay had been poor; Aurelia had turns of dizziness in her head; Mark had broken his ankle. As this was his fourth offense, Miranda inquired how many bones there were in the human body, "so 't they'd know when Mark got through breakin' 'em." The time for paying the interest on the mortgage, that incubus that had crushed all the joy out of the Randall household, had come and gone, and there was no possibility, for the first time in fourteen years, of paying the required forty-eight dollars. The only bright spot in the horizon was Hannah's engagement to Will Melville,--a young farmer whose land joined Sunnybrook, who had a good house, was alone in the world, and his own master. Hannah was so satisfied with her own unexpectedly radiant prospects that she hardly realized her mother's anxieties; for there are natures which flourish, in adversity, and deteriorate when exposed to sudden prosperity. She had made a visit of a week at the brick house; and Miranda's impression, conveyed in privacy to Jane, was that Hannah was close as the bark of a tree, and consid'able selfish too; that when she'd clim' as fur as she could in the world, she'd kick the ladder out from under her, everlastin' quick; that, on being sounded as to her ability to be of use to the younger children in the future, she said she guessed she'd done her share a'ready, and she wan't goin' to burden Will with her poor relations. "She's Susan Randall through and through!" ejaculated Miranda. "I was glad to see her face turned towards Temperance. If that mortgage is ever cleared from the farm, 't won't be Hannah that'll do it; it'll be Rebecca or me!"