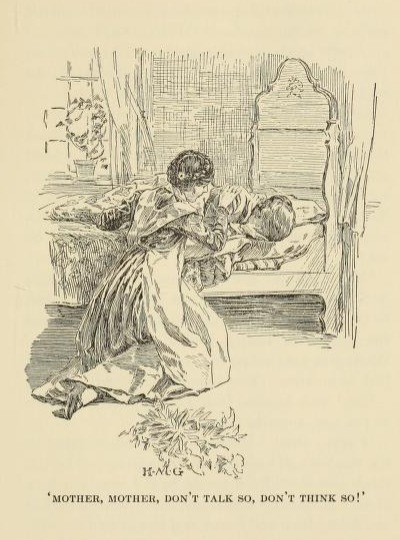 Two months had gone by,--two months of steady, fagging work; of cooking, washing, ironing; of mending and caring for the three children, although Jenny was fast becoming a notable little housewife, quick, ready, and capable. They were months in which there had been many a weary night of watching by Aurelia's bedside; of soothing and bandaging and rubbing; of reading and nursing, even of feeding and bathing. The ceaseless care was growing less now, and the family breathed more freely, for the mother's sigh of pain no longer came from the stifling bedroom, where, during a hot and humid August, Aurelia had lain, suffering with every breath she drew. There would be no question of walking for many a month to come, but blessings seemed to multiply when the blinds could be opened and the bed drawn near the window; when mother, with pillows behind her, could at least sit and watch the work going on, could smile at the past agony and forget the weary hours that had led to her present comparative ease and comfort.

No girl of seventeen can pass through such an ordeal and come out unchanged; no girl of Re- becca's temperament could go through it without some inward repining and rebellion. She was doing tasks in which she could not be fully happy,--heavy and trying tasks, which perhaps she could never do with complete success or satisfaction; and like promise of nectar to thirsty lips was the vision of joys she had had to put aside for the performance of dull daily duty. How brief, how fleeting, had been those splendid visions when the universe seemed open for her young strength to battle and triumph in! How soon they had faded into the light of common day! At first, sympathy and grief were so keen she thought of nothing but her mother's pain. No consciousness of self interposed between her and her filial service; then, as the weeks passed, little blighted hopes began to stir and ache in her breast; defeated ambitions raised their heads as if to sting her; unattainable delights teased her by their very nearness; by the narrow line of separation that lay between her and their realization. It is easy, for the moment, to tread the narrow way, looking neither to the right nor left, upborne by the sense of right doing; but that first joy of self-denial, the joy that is like fire in the blood, dies away; the path seems drearier and the footsteps falter. Such a time came to Rebecca, and her bright spirit flagged when the letter was received saying that her position in Augusta had been filled. There was a mutinous leap of the heart then, a beating of wings against the door of the cage, a longing for the freedom of the big world outside. It was the stirring of the powers within her, though she called it by no such grand name. She felt as if the wind of destiny were blowing her flame hither and thither, burning, consuming her, but kindling nothing. All this meant one stormy night in her little room at Sunnybrook, but the clouds blew over, the sun shone again, a rainbow stretched across the sky, while "hope clad in April green" smiled into her upturned face and beckoned her on, saying:--

Threads of joy ran in and out of the gray tangled web of daily living. There was the attempt at odd moments to make the bare little house less bare by bringing in out-of-doors, taking a leaf from Nature's book and noting how she conceals ugliness wherever she finds it. Then there was the satisfaction of being mistress of the poor domain; of planning, governing, deciding; of bringing order out of chaos; of implanting gayety in the place of inert resignation to the inevitable. Another element of comfort was the children's love, for they turned to her as flowers to the sun, drawing confidently on her fund of stories, serene in the conviction that there was no limit to Rebecca's power of make-believe. In this, and in yet greater things, little as she realized it, the law of compensation was working in her behalf, for in those anxious days mother and daughter found and knew each other as never before. A new sense was born in Rebecca as she hung over her mother's bed of pain and unrest,--a sense that comes only of ministering, a sense that grows only when the strong bend toward the weak. As for Aurelia, words could never have expressed her dumb happiness when the real revelation of motherhood was vouchsafed her. In all the earlier years when her babies were young, carking cares and anxieties darkened the fireside with their brooding wings. Then Rebecca had gone away, and in the long months of absence her mind and soul had grown out of her mother's knowledge, so that now, when Aurelia had time and strength to study her child, she was like some enchanting changeling. Aurelia and Hannah had gone on in the dull round and the common task, growing duller and duller; but now, on a certain stage of life's journey, who should appear but this bewildering being, who gave wings to thoughts that had only crept before; who brought color and grace and harmony into the dun brown texture of existence.

You might harness Rebecca to the heaviest plough, and while she had youth on her side, she would always remember the green earth under her feet and the blue sky over her head. Her physical eye saw the cake she was stirring and the loaf she was kneading; her physical ear heard the kitchen fire crackling and the teakettle singing, but ever and anon her fancy mounted on pinions, rested itself, renewed its strength in the upper air. The bare little farmhouse was a fixed fact, but she had many a palace into which she now and then withdrew; palaces peopled with stirring and gallant figures belonging to the world of romance; palaces not without their heavenly apparitions too, breathing celestial counsel. Every time she retired to her citadel of dreams she came forth radiant and refreshed, as one who has seen the evening star, or heard sweet music, or smelled the rose of joy.

Aurelia could have understood the feeling of a narrow-minded and conventional hen who has brought a strange, intrepid duckling into the world; but her situation was still more wonderful, for she could only compare her sensations to those of some quiet brown Dorking who has brooded an ordinary egg and hatched a bird of paradise. Such an idea had crossed her mind more than once during the past fortnight, and it flashed to and fro this mellow October morning when Rebecca came into the room with her arms full of goldenrod and flaming autumn leaves.

"Just a hint of the fall styles, mother," she said, slipping the stem of a gorgeous red and yellow sapling between the mattress and the foot of the bed. "This was leaning over the pool, and I was afraid it would be vain if I left it there too long looking at its beautiful reflection, so I took it away from danger; isn't it wonderful? How I wish I could carry one to poor aunt Miranda to-day! There's never a flower in the brick house when I'm away."

It was a marvelous morning. The sun had climbed into a world that held in remembrance only a succession of golden days and starlit nights. The air was fragrant with ripening fruit, and there was a mad little bird on a tree outside the door nearly bursting his throat with joy of living. He had forgotten that summer was over, that winter must ever come; and who could think of cold winds, bare boughs, or frozen streams on such a day? A painted moth came in at the open window and settled on the tuft of brilliant leaves. Aurelia heard the bird and looked from the beauty of the glowing bush to her tall, splendid daughter, standing like young Spring with golden Autumn in her arms.

Then suddenly she covered her eyes and cried, "I can't bear it! Here I lie chained to this bed, interfering with everything you want to do. It's all wasted! All my saving and doing without; all your hard study; all Mirandy's outlay; everything that we thought was going to be the making of you!"

"Mother, mother, don't talk so, don't think so!" exclaimed Rebecca, sitting down impetuously on the floor by the bed and dropping the goldenrod by her side. "Why, mother, I'm only a little past seventeen! This person in a purple calico apron with flour on her nose is only the beginnings of me! Do you remember the young tree that John transplanted? We had a dry summer and a cold winter and it didn't grow a bit, nor show anything of all we did for it; then there was a good year and it made up for lost time. This is just my little `rooting season,' mother, but don't go and believe my day is over, because it hasn't begun! The old maple by the well that's in its hundredth year had new leaves this summer, so there must be hope for me at seventeen!"

"You can put a brave face on it," sobbed Aurelia, "but you can't deceive me. You've lost your place; you'll never see your friends here, and you're nothing but a drudge!"

"I look like a drudge," said Rebecca mysteriously, with laughing eyes, "but I really am a princess; you mustn't tell, but this is only a disguise; I wear it for reasons of state. The king and queen who are at present occupying my throne are very old and tottering, and are going to abdicate shortly in my favor. It's rather a small kingdom, I suppose, as kingdoms go, so there isn't much struggle for it in royal circles, and you mustn't expect to see a golden throne set with jewels. It will probably be only of ivory with a nice screen of peacock feathers for a background; but you shall have a comfortable chair very near it, with quantities of slaves to do what they call in novels your `lightest bidding.'"

Aurelia smiled in spite of herself, and though not perhaps wholly deceived, she was comforted.

"I only hope you won't have to wait too long for your thrones and your kingdoms, Rebecca," she said, "and that I shall have a sight of them before I die; but life looks very hard and rough to me, what with your aunt Miranda a cripple at the brick house, me another here at the farm, you tied hand and foot, first with one and then with the other, to say nothing of Jenny and Fanny and Mark! You've got something of your father's happy disposition, or it would weigh on you as it does on me."

"Why, mother!" cried Rebecca, clasping her knees with her hands; "why, mother, it's enough joy just to be here in the world on a day like this; to have the chance of seeing, feeling, doing, becoming! When you were seventeen, mother, wasn't it good just to be alive? You haven't forgotten?"

"No," said Aurelia, "but I wasn't so much alive as you are, never in the world."

"I often think," Rebecca continued, walking to the window and looking out at the trees,--"I often think how dreadful it would be if I were not here at all. If Hannah had come, and then, instead of me, John; John and Jenny and Fanny and the others, but no Rebecca; never any Rebecca! To be alive makes up for everything; there ought to be fears in my heart, but there aren't; something stronger sweeps them out, something like a wind. Oh, see! There is Will driving up the lane, mother, and he ought to have a letter from the brick house."