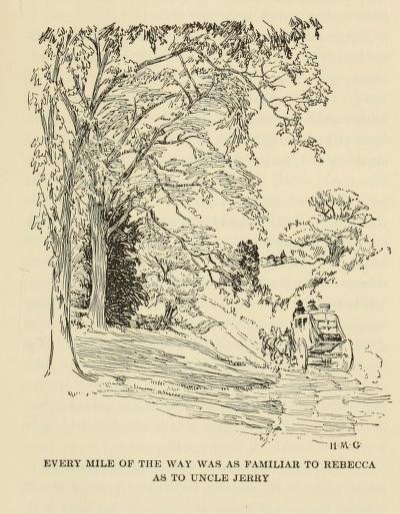 When Rebecca alighted from the train at Maplewood and hurried to the post- office where the stage was standing, what was her joy to see uncle Jerry Cobb holding the horses' heads.

"The reg'lar driver 's sick," he explained, "and when they sent for me, thinks I to myself, my drivin' days is over, but Rebecky won't let the grass grow under her feet when she gits her aunt Jane's letter, and like as not I'll ketch her to-day; or, if she gits delayed, to-morrow for certain. So here I be jest as I was more 'n six year ago. Will you be a real lady passenger, or will ye sit up in front with me?"

Emotions of various sorts were all struggling together in the old man's face, and the two or three bystanders were astounded when they saw the handsome, stately girl fling herself on Mr. Cobb's dusty shoulder crying like a child. "Oh, uncle Jerry!" she sobbed; "dear uncle Jerry! It's all so long ago, and so much has happened, and we've grown so old, and so much is going to happen that I'm fairly frightened."

"There, there, lovey," the old man whispered comfortingly, "we'll be all alone on the stage, and we'll talk things over 's we go along the road an' mebbe they won't look so bad."

Every mile of the way was as familiar to Rebecca as to uncle Jerry; every watering-trough, grindstone, red barn, weather-vane, duck-pond, and sandy brook. And all the time she was looking backward to the day, seemingly so long ago, when she sat on the box seat for the first time, her legs dangling in the air, too short to reach the footboard. She could smell the big bouquet of lilacs, see the pink-flounced parasol, feel the stiffness of the starched buff calico and the hated prick of the black and yellow porcupine quills. The drive was taken almost in silence, but it was a sweet, comforting silence both to uncle Jerry and the girl.

Then came the sight of Abijah Flagg shelling beans in the barn, and then the Perkins attic windows with a white cloth fluttering from them. She could spell Emma Jane's loving thought and welcome in that little waving flag; a word and a message sent to her just at the first moment when Riverboro chimneys rose into view; something to warm her heart till they could meet.

The brick house came next, looking just as of yore; though it seemed to Rebecca as if death should have cast some mysterious spell over it. There were the rolling meadows, the stately elms, all yellow and brown now; the glowing maples, the garden-beds bright with asters, and the hollyhocks, rising tall against the parlor windows; only in place of the cheerful pinks and reds of the nodding stalks, with their gay rosettes of bloom, was a crape scarf holding the blinds together, and another on the sitting-room side, and another on the brass knocker of the brown-painted door.

"Stop, uncle Jerry! Don't turn in at the side; hand me my satchel, please; drop me in the road and let me run up the path by myself. Then drive away quickly."

At the noise and rumble of the approaching stage the house door opened from within, just as Rebecca closed the gate behind her. Aunt Jane came down the stone steps, a changed woman, frail and broken and white. Rebecca held out her arms and the old aunt crept into them feebly, as she did on that day when she opened the grave of her buried love and showed the dead face, just for an instant, to a child. Warmth and strength and life flowed into the aged frame from the young one.

"Rebecca," she said, raising her head, "before you go in to look at her, do you feel any bitterness over anything she ever said to you?"

Rebecca's eyes blazed reproach, almost anger, as she said chokingly: "Oh, aunt Jane! Could you believe it of me? I am going in with a heart brimful of gratitude!"

"She was a good woman, Rebecca; she had a quick temper and a sharp tongue, but she wanted to do right, and she did it as near as she could. She never said so, but I'm sure she was sorry for every hard word she spoke to you; she didn't take 'em back in life, but she acted so 't you'd know her feeling when she was gone."

"I told her before I left that she'd been the making of me, just as mother says," sobbed Rebecca

"She wasn't that," said Jane. "God made you in the first place, and you've done considerable yourself to help Him along; but she gave you the wherewithal to work with, and that ain't to be despised; specially when anybody gives up her own luxuries and pleasures to do it. Now let me tell you something, Rebecca. Your aunt Mirandy 's willed all this to you,--the brick house and buildings and furniture, and the land all round the house, as far 's you can see."

Rebecca threw off her hat and put her hand to her heart, as she always did in moments of intense excitement. After a moment's silence she said: "Let me go in alone; I want to talk to her; I want to thank her; I feel as if I could make her hear and feel and understand!"

Jane went back into the kitchen to the inexorable tasks that death has no power, even for a day, to blot from existence. He can stalk through dwelling after dwelling, leaving despair and desolation behind him, but the table must be laid, the dishes washed, the beds made, by somebody.

Ten minutes later Rebecca came out from the Great Presence looking white and spent, but chastened and glorified. She sat in the quiet doorway, shaded from the little Riverboro world by the overhanging elms. A wide sense of thankfulness and peace possessed her, as she looked at the autumn landscape, listened to the rumble of a wagon on the bridge, and heard the call of the river as it dashed to the sea. She put up her hand softly and touched first the shining brass knocker and then the red bricks, glowing in the October sun.

It was home; her roof, her garden, her green acres, her dear trees; it was shelter for the little family at Sunnybrook; her mother would have once more the companionship of her sister and the friends of her girlhood; the children would have teachers and playmates.