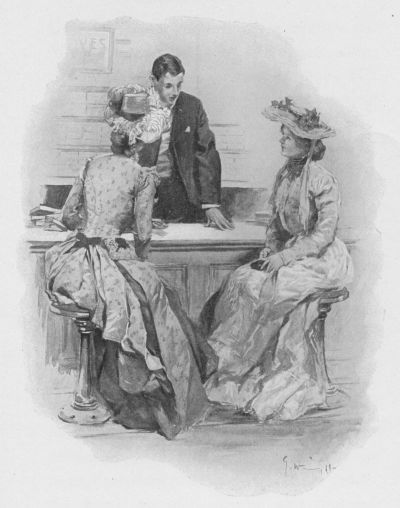 Was this the world, after all? Rose asked herself; and, if so, what was amiss with it, and where was the charm, the bewilderment, the intoxication, the glamour!

She had been glad to come to Boston, for the last two weeks in Edgewood had proved intolerable. She had always been a favorite heretofore, from the days when the boys fought for the privilege of dragging her sled up the hills, and filling her tiny mitten with peppermints, down to the year when she came home from the Wareham Female Seminary, an acknowledged belle and beauty. Suddenly she had felt her popularity dwindling. There was no real change in the demeanor of her acquaintances, but there was a certain subtle difference of atmosphere. Everybody sympathized tacitly with Stephen, and she did not wonder, for there were times when she secretly took his part against herself. Only a few candid friends had referred to the rupture openly in conversation, but these had been bluntin their disapproval.

It seemed part of her ill fortune that just at this time Rufus should be threatened with partial blindness, and that Stephen's heart, already sore, should be torn with new anxieties. She could hardly bear to see the doctor's carriage drive by day after day, and hear night after night that Rufus was unresigned, melancholy, half mad; while Stephen, as the doctor said, was brother, mother, and father in one, as gentle as a woman, as firm as Gibraltar.

These foes to her peace of mind all came from within; but without was the hourly reproach of her grandmother, whose scorching tongue touched every sensitive spot in the girl's nature and burned it like fire.

Finally a way of escape opened. Mrs. Wealthy Brooks, who had always been rheumatic, grew suddenly worse. She had heard of a "magnetic" physician in Boston, also of one who used electricity with wonderful effect, and she announced her intention of taking both treatments impartially and alternately. The neighbors were quite willing that Wealthy Ann Brooks should spend the deceased Ezra's money in any way she pleased,--she had earned it, goodness knows, by living with him for twenty-five years,--but before the day for her departure arrived her right arm and knee became so much more painful that it was impossible for her to travel alone.

At this juncture Rose was called upon to act as nurse and companion in a friendly way. She seized the opportunity hungrily as a way out of her present trouble; but, knowing what Mrs. Brooks's temper was in time of health, she could see clearly what it was likely to prove when pain and anguish wrung the brow.

Rose had been in Boston now for some weeks, and she was sitting in the Joy Street boarding-house,--Joy Street, forsooth! It was nearly bedtime, and she was looking out upon a huddle of roofs and back yards, upon a landscape filled with clothes-lines, ash-barrels, and ill-fed cats. There were no sleek country tabbies, with the memory in their eyes of tasted cream, nothing but city-born, city-bred, thin, despairing cats of the pavement, cats no more forlorn than Rose herself.

She had "seen Boston," for she had accompanied Mrs. Brooks in the horse-cars daily to the two different temples of healing where that lady worshipped and offered sacrifices. She had also gone with Maude Arthurlena to Claude Merrill's store to buy pair of gloves, and had overheard Miss Dir (the fashionable "lady-assistant" before mentioned) say to Miss Brackett of the ribbon department, that she thought Mr. Merrill must have worn his blinders that time he stayed so long in Edgewood. This bit of polished irony was unintelligible to Rose at first, but she mastered it after an hour's reflection. She wasn't looking her best that day, she knew; the cotton dresses that seemed so pretty at home were common and countrified here, and her best black cashmere looked cheap and shapeless beside Miss Dir's brilliantine. Miss Dir's figure was her strong point, and her dressmaker was particularly skillful in the arts of suggestion, concealment, and revelation. Beauty has its chosen backgrounds. Rose in white dimity, standing knee deep in her blossoming brier bushes, the river running at her feet, dark pine trees behind her graceful head, sounded depths and touched heights of harmony forever beyond the reach of the modish Miss Dir, but she was out of her element and suffered accordingly.

Rose had gone to walk with Claude one evening when she first arrived. He had shown her the State House and the Park Street Church, and sat with her on one of the benches in the Common until nearly ten. She knew that Mrs. Brooks had told her nephew of the broken engagement, but he made no reference to the matter, save to congratulate her that she was rid of a man who was so clumsy, so dull and behind the times, as Stephen Waterman, saying that he had always marveled she could engage herself to anybody who could insult her by offering her a turquoise ring.

Claude was very interesting that evening, Rose thought, but rather gloomy and unlike his former self. He referred to his grave responsibilities, to the frail health of Maude Arthurlena, and to the vicissitudes of business. He vaguely intimated that his daily life in the store was not so pleasant as it had been formerly; that there were "those" (he would speak no more plainly) who embarrassed him with undesired attentions, "those" who, without the smallest shadow of right, vexed him with petty jealousies.

Rose dared not ask questions on so delicate a topic, but she remembered in a flash Miss Dir's heavy eyebrows, snapping eyes, and high color. Claude seemed very happy that Rose had come to Boston, though he was surprised, knowing what a trial his aunt must be, now that she was so helpless. It was unfortunate, also, that Rose could not go on excursions without leaving his aunt alone, or he should have been glad to offer his escort. He pressed her hand when he left her at her door, telling her she could never realize what a comfort her friendship was to him; could never imagine how thankful he was that she had courageously freed herself from ties that in time would have made her wretched. His heart was full, he said, of feelings he dared not utter; but in the near future, when certain clouds had rolled by, he would unlock its treasures, and then--but no more to-night: he could not trust himself.

Rose felt as if she were assuming one of the characters in a mysterious romance, such as unfolded itself only in books or in Boston; but, thrilling as it was, it was nevertheless extremely unsatisfactory.

Convinced that Claude Merrill was passionately in love with her, one of her reasons for coming to Boston had been to fall more deeply in love with him, and thus heal some, at least, of the wounds she had inflicted. It may have been a foolish idea, but after three weeks it seemed still worse,--a useless one; for after several interviews she felt herself drifting farther and farther from Claude; and if he felt any burning ambition to make her his own, he certainly concealed it with admirable art. Given up, with the most offensive magnanimity, by Stephen, and not greatly desired by Claude,--that seemed the present status of proud Rose Wiley of the Brier Neighborhood.

It was June, she remembered, as she leaned out of the open window; at least it was June in Edgewood, and she supposed for convenience's sake they called it June in Boston. Not that it mattered much what the poor city prisoners called it. How beautiful the river would be at home, with the trees along the banks in full leaf! How she hungered and thirsted for the river, --to see it sparkle in the sunlight; to watch the moonglade stretching from one bank to the other; to hear the soft lap of the water on the shore, and the distant murmur of the falls at the bridge! And the Brier Neighborhood would be at its loveliest, for the wild roses were in blossom by now. And the little house! How sweet it must look under the shade of the elms, with the Saco rippling at the back! Was poor Rufus still lying in a darkened room, and was Stephen nursing him,-- disappointed Stephen,--dear, noble old Stephen?