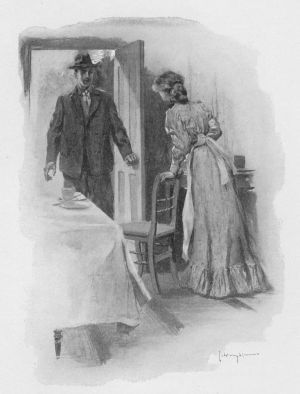 Long ago, when Stephen was a boy of fourteen or fifteen, he had gone with his father to a distant town to spend the night. After an early breakfast next morning his father had driven off for a business interview, and left the boy to walk about during his absence. He wandered aimlessly along a quiet side street, and threw himself down on the grass outside a pretty garden to amuse himself as best he could.

After a few minutes he heard voices, and, turning, peeped through the bars of the gate in idle, boyish curiosity. It was a small brown house; the kitchen door was open, and a table spread with a white cloth was set in the middle of the room. There was a cradle in a far corner, and a man was seated at the table as though he might be waiting for his breakfast.

There is a kind of sentiment about the kitchen in New England, a kind of sentiment not provoked by other rooms. Here the farmer drops in to spend a few minutes when he comes back from the barn or field on an errand. Here, in the great, clean, sweet, comfortable place, the busy housewife lives, sometimes rocking the cradle, sometimes opening and shutting the oven door, sometimes stirring the pot, darning stockings, paring vegetables, or mixing goodies in a yellow bowl. The children sit on the steps, stringing beans, shelling peas, or hulling berries; the cat sleeps on the floor near the wood-box; and the visitor feels exiled if he stays in sitting-room or parlor, for here, where the mother is always busy, is the heart of the farm-house.

There was an open back door to this kitchen, a door framed in morning-glories, and the woman (or was she only girl?) standing at the stove was pretty,--oh, so pretty in Stephen's eyes! His boyish heart went out to her on the instant. She poured a cup of coffee and walked with it to the table; then an unexpected, interesting thing happened--something the boy ought not 'to have seen, and never forgot. The man, putting out his hand to take the cup, looked up at the pretty woman with a smile, and she stooped and kissed him.

Stephen was fifteen. As he looked, on the instant he became a man, with a man's hopes, desires, ambitions. He looked eagerly, hungrily, and the scene burned itself on the sensitive plate of his young heart, so that, as he grew older, he could take the picture out in the dark, from time to time, and look at it again. When he first met Rose, he did not know precisely what she was to mean to him; but before long, when he closed his eyes and the old familiar picture swam into his field of vision, behold, by some spiritual chemistry, the pretty woman's face had given place to that of Rose!

All such teasing visions had been sternly banished during this sorrowful summer, and it was a thoughtful, sober Stephen who drove along the road on this mellow August morning. The dust was deep; the goldenrod waved its imperial plumes, making the humble waysides gorgeous; the river chattered and sparkled till it met the logs at the Brier Neighorhood, and then, lapsing into silence, flowed steadily under them till it found a vent for its spirits in the dashing and splashing of the falls.

Haying was over; logging was to begin that day; then harvesting; then wood-cutting; then eternal successions of plowing, sowing, reaping, haying, logging, harvesting, and so on, to the endless end of his days. Here and there a red or a yellow branch, painted only yesterday, caught his eye and made him shiver. He was not ready for winter; his heart still craved the summer it had missed.

Hello! What was that? Corn-stalks prone on the earth? Sign torn down and lying flat in the grass? Blinds open, fire in the chimney?

He leaped from the wagon, and, hinging the reins to Alcestis Crambry, said, "Stay right here out of sight, and don't you move till I call you!" and striding up the green pathway, hung open the kitchen door.

A forest of corn waving in the doorway at the back, morning-glories clambering round and round the window-frames, table with shining white cloth, kettle humming and steaming, something bubbling in a pan on the stove, fire throwing out sweet little gleams of welcome through the open damper. All this was taken in with one incredulous, rapturous twinkle of an eye; but something else, too: Rose of all roses, Rose of the river, Rose of the world, standing behind a chair, her hand pressed against her heart, her lips parted, her breath coming and going! She was glowing like a jewel, glowing with the extraordinary brilliancy that emotion gives to some women. She used to be happy in a gay, sparkling way, like the shallow part of the stream as it chotters over white pebbles and bright sands. Now it was a broad, steady, full happiness like the deeps of the river under the sun.

"Don't speak, Stephen, till you hear what I have to say. It takes a good deal of courage for a girl to do as I am doing; but I want to show how sorry I am, and it's the only way." She was trembling, and the words came faster and faster. "I've been very wrong and foolish, and made you very unhappy, but I haven't done what you would have hated most. I haven't been engaged to Claude Merrill; he hasn't so much as asked me. I am here to beg you to forgive me, to eat breakfast with me, to drive me to the minister's and marry me quickly, quickly, before anything happens to prevent us, and then to bring me home here to live all the days of my life. Oh, Stephen dear, honestly, honestly, you haven't lost anything in all this long, miserable summer. I've suffered, too, and I'm better worth loving than I was. Will you take me back?"

Rose had a tremendous power of provoking and holding love, and Stephen of loving. His was too generous a nature for revilings and complaints and reproaches.

The shores of his heart were strewn with the wreckage of the troubled summer, but if the tide of love is high enough, it washes such things out of remembrance. He just opened his arms and took Rose to his heart, faults and all, with joy--and gratitude; and she was as happy as a child who has escaped the scolding it richly deserved, and who determines, for very thankfulness' sake, never to be naughty again.

"You don't know what you've done for me, Stephen," she whispered, with her face hidden on his shoulder. "I was just a common little prickly rosebush when you came along like a good gardener and 'grafted in' something better; the something better was your love, Stephen dear, and it's made everything different. The silly Rose you were engaged to long ago has disappeared somewhere; I hope you won't be able to find her under the new leaves."

"She was all I wanted," said Stephen.

"You thought she was," the girl answered, "because you didn't see the prickles, but you'd have felt them sometime. The old Rose was a selfish thing, not good enough for you; the new Rose is going to be your wife, and Rufus's sister, and your mother's daughter, all in one."

Then such a breakfast was spread as Stephen, in his sorry years of bachelor existence, had forgotten could exist; but before he broke his fast he ran out to the wagon and served the astonished Alcestis with his wedding refreshments then and there, bidding him drive back to the River Farm and bring him a package that lay in the drawer of his shaving-stand, package placed there when hot youth and love and longing had inspired him to hurry on the marriage day.

"There's an envelope, Alcestis," he cried, "a long envelope way, way back in the corner, and a small box on top of it. Bring them both, and my wallet too, and if you find them all and get them to me safely you shall be bridesmaid and groomsman and best man and usher and maid of honor at a wedding, in less than an hour! Off with you! Drive straight and use the whip on Dolly!"

When he reentered the kitchen, flushed with joy and excitement, Rose put the various good things on the table and he almost tremblingly took his seat, fearing that contact with the solid wood might wake him from this entrancing vision.

"I'd like to put you in your chair like a queen and wait on you," he said with a soft boyish stammer; "but I am too dazed with happiness to be of any use."

"It's my turn to wait upon you, and I--Oh! how I love to have you dazed," Rose answered. "I'll be at the table presently myself; but we have been housekeeping only three minutes, and we have nothing but the tin coffee-pot this morning, so I'll pour the coffee from the stove."

She filled a cup with housewifely care and brought it to Stephen's side. As she set it down and was turning, she caught his look,--a look so full of longing that no loving woman, however busy, could have resisted it; then she stooped and kissed him fondly, fervently.

Stephen put his arm about her, and, drawing her down to his knee, rested his head against her soft shoulder with a sigh of comfort, like that of a tired child. He had waited for it ten years; and at last the dream-room had come true.