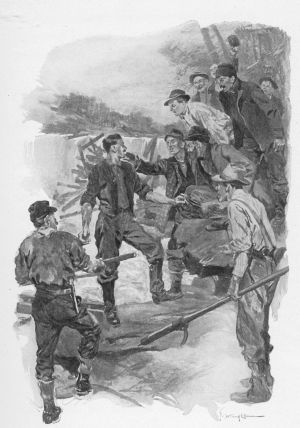 Just where the bridge knits together the two little villages of Pleasant River and Edgewood, the glassy mirror of the Saco broadens suddenly, sweeping over the dam in a luminous torrent. Gushes of pure amber mark the middle of the dam, with crystal and silver at the sides, and from the seething vortex beneath the golden cascade the white spray dashes up in fountains. In the crevices and hollows of the rocks the mad water churns itself into snowy froth, while the foam-decked torrent, deep, strong, and troubled to its heart, sweeps majestically under the bridge, then dashes between wooded shores piled high with steep masses of rock, or torn and riven by great gorges.

There had been much rain during the summer, and the Saco was very high, so on the third day of the Edgewood drive there was considerable excitement at the bridge, and a goodly audience of villagers from both sides of the river. There were some who never came, some who had no fancy for the sight, some to whom it was an old story, some who were too busy, but there were many to whom- it was the event of events, a never-ending source of interest.

Above the fall, covering the placid surface of the river, thousands of logs lay quietly "in boom" until the "turning out" process, on the last day of the drive, should release them and give them their chance of display, their brief moment of notoriety, their opportunity of interesting, amusing, exciting, and exasperating the onlookers by their antics.

Heaps of logs had been cast up on the rocks below the dam, where they lay in hopeless confusion, adding nothing, however, to the problem of the moment, for they too bided their time. If they had possessed wisdom, discretion, and caution, they might have slipped gracefully over the falls and, steering clear of the hidden ledges (about which it would seem they must have heard whispers from the old pine trees along the river), have kept a straight course and reached their destination without costing the Edgewood Lumber Company a small fortune. Or, if they had inclined toward a jolly and adventurous career, they could have joined one of the various jams or "bungs," stimulated by the thought that any one of them might be a key-log, holding for a time the entire mass in its despotic power. But they had been stranded early in the game, and, after lying high and dry for weeks, would be picked off one by one and sent down-stream.

In the tumultuous boil, the foaming hubbub and flurry at the foot of the falls, one enormous peeled log wallowed up and down like a huge rhinoceros, greatly pleasing the children by its clumsy cavortings. Some conflict of opposing forces kept it ever in motion, yet never set it free. Below the bridge were always the real battle-grounds, the scenes of the first and the fiercest conflicts. A ragged ledge of rock, standing well above the yeasty torrent, marked the middle of the river. Stephen had been stranded there once, just at dusk, on a stormy afternoon in spring. A jam had broken under the men, and Stephen, having taken too great risks, had been caught on the moving mass, and, leaping from log to log, his only chance for life had been to find a footing on Gray Rock, which was nearer than the shore.

Rufus was ill at the time, and Mrs. Waterman so anxious and nervous that processions of boys had to be sent up to the River Farm, giving the frightened mother the latest bulletins of her son's welfare. Luckily, the river was narrow just at the Gray Rock, and it was a quite possible task, though no easy one, to lash two ladders together and make a narrow bridge on which the drenched and shivering man could reach the shore. There were loud cheers when Stephen ran lightly across the slender pathway that led to safety--ran so fast that the ladders had scarce time to bend beneath his weight. He had certainly "taken chances," but when did he not do that? The logger's life is one of "moving accidents by flood and field," and Stephen welcomed with wild exhilaration every hazard that came in his path. To him there was never a dull hour from the moment that the first notch was cut in the tree (for he sometimes joined the boys in the lumber camp just for a frolic) till the later one when the hewn log reached its final destination. He knew nothing of "tooling" a four-in-hand through narrow lanes or crowded thoroughfares,-- nothing of guiding a horse over the hedges and through the pitfalls of a stiff bit of hunting country; his steed was the rearing, plunging, kicking log, and he rode it like a river god.

The crowd loves daring, and so it welcomed Stephen with braves, but it knew, as he knew, that he was only doing his duty by the Company, only showing the Saco that man was master, only keeping the old Waterman name in good repute.

"Ye can't drownd some folks," Old Kennebec had said, as he stood in a group on the shore; "not without you tie sand-bags to'em an' drop 'em in the Great Eddy. I'm the same kind; I remember when I was stranded on jest sech a rock in the Kennebec, only they left me there all night for dead, an' I had to swim the rapids when it come daylight."

"We're well acquainted with that rock and them rapids," exclaimed one of the river-drivers, to the delight of the company.

Rose had reason to remember Stephen's adventure, for he had clambered up the bank, smiling and blushing under the hurrahs of the boys, and, coming to the wagon where she sat waiting for her grandfather, had seized a moment to whisper: "Did you care whether I came across safe, Rose? Say you did!"

Stephen recalled that question, too, on this August morning; perhaps because this was to be a red-letter day, and sometime, when he had a free moment,--sometime before supper, when he and Rose were sitting apart from the others, watching the logs,--he intended again to ask her to marry him. This thought trembled in him, stirring the deeps of his heart like a great wave, almost sweeping him off his feet when he held it too close and let it have full sway. It would be the fourth time that he had asked Rose this question of all questions, but there was no perceptible difference in his excitement, for there was always the possible chance that she might change her mind and say yes, if only for variety. Wanting a thing continuously, unchangingly, unceasingly, year after year, he thought,--longing to reach it as the river longed to reach the sea,--such wanting might, in course of time, mean having.

Rose drove up to the bridge with the men's luncheon, and the under boss came up to take the baskets and boxes from the back of the wagon.

"We've had a reg'lar tussle this mornin', Rose," he said. "The logs are determined not to move. Ike Billings, that's the han'somest and fluentest all-round swearer on the Saco, has tried his best on the side jam. He's all out o' cuss-words and there hain't a log budged. Now, stid o' dogwarpin' this afternoon, an' lettin' the oxen haul off all them stubborn logs by main force, we're goin' to ask you to set up on the bank and smile at the jam. 'Land! she can do it!' says Ike a minute ago. 'When Rose starts smilin',' he says, 'there ain't a jam nor a bung in me that don't melt like wax and jest float right off same as the logs do when they get into quiet, sunny water.'"

Rose blushed and laughed, and drove up the hill to Mite Shapley's, where she put up the horse and waited till the men had eaten their luncheon. The drivers slept and had breakfast and supper at the Billings house, a mile down river, but for several years Mrs. Wiley had furnished the noon meal, sending it down piping hot on the stroke of twelve. The boys always said that up or down the whole length of the Saco there was no such cooking as the Wileys', and much of this praise was earned by Rose's serving. It was the old grandmother who burnished the tin plates and dippers till they looked like silver; for crotchety and sharp-tongued as she was--she never allowed Rose to spoil her hands with soft soap and sand: but it was Rose who planned and packed, Rose who hemmed squares of old white tablecloths and sheets to line the baskets and keep things daintily separate, Rose, also, whose tarts and cakes were the pride and admiration of church sociables and sewing societies.

Where could such smoking pots of beans be found? A murmur of ecstatic approval ran through the crowd when the covers were removed. Pieces of sweet home-fed pork glistened like varnished mahogany on the top of the beans, and underneath were such deeps of fragrant juice as come only from slow fires and long, quiet hours in brick ovens. Who else could steam and bake such mealy leaves of brown bread, brown as plum-pudding, yet with no suspicion of sogginess? Who such soda-biscuits, big, feathery, tasting of cream, and hardly needing butter? And green-apple pies! Could such candied lower crusts be found elsewhere,or more delectable filling? Or such rich, nutty doughnuts?--doughnuts that had spurned the hot fat which is the ruin of so many, and risen from its waves like golden-brown Venuses.

"By the great seleckmen!" ejaculated Jed Towle, as he swallowed his fourth, "I'd like to hev a wife, two daughters, and four sisters like them Wileys, and jest set still on the river-bank an' hev 'em cook victuals for me. I'd hev nothin' to wish for then but a mouth as big as the Saco's."

"And I wish this custard pie was the size o' Bonnie Eagle Pond," said Ike Billings. "I'd like to fall into the middle of it and eat my way out!"

"Look at that bunch o' Chiny asters tied on t' the bail o' that biscuit-pail!" said Ivory Dunn. "That's the girl's doin's, you bet women-folks don't seem to make no bo'quets after they git married. Let's divide 'em up an' wear 'em drivin' this afternoon; mebbe they'll ketch the eye so't our rags won't show so bad. Land! it's lucky my hundred days is about up! If I don't git home soon, I shall be arrested for goin' without clo'es. I set up'bout all night puttin' these blue patches in my pants an' tryin' to piece together a couple of old red-flannel shirts to make one whole one. That's the worst o' drivin' in these places where the pretty girls make a habit of comin' down to the bridge to see the fun. You hev to keep rigged up jest so stylish; you can't git no chance at the rum bottle, an' you even hev to go a leetle mite light on swearin'."