The Pine and the Rose 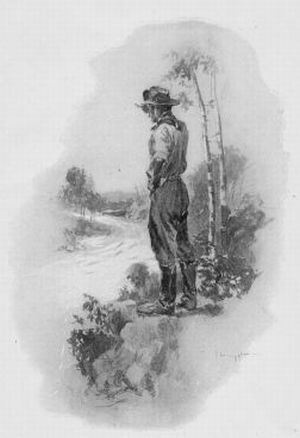 It was not long after sunrise, and Stephen Waterman, fresh from his dip in the river, had scrambled up the hillside from the hut in the alder-bushes where he had made his morning toilet.

An early ablution of his sort was not the custom of the farmers along the banks of the Saco, but the Waterman house was hardly a stone's throw from the water, and there was a clear, deep swimming-hole in the Willow Cove that would have tempted the busiest man, or the least cleanly, in York County. Then, too, Stephen was a child of the river, born, reared, schooled on its very brink, never happy unless he were on it, or in it, or beside it, or at least within sight or sound of it.

The immensity of the sea had always silenced and overawed him, left him cold in feeling. The river wooed him, caressed him, won his heart. It was just big enough to love. It was full of charms and changes, of varying moods and sudden surprises. Its voice stole in upon his ear with a melody far sweeter and more subtle than the boom of the ocean. Yet it was not without strength, and when it was swollen with the freshets of the spring and brimming with the bounty of its sister streams, it could dash and roar, boom and crash, with the best of them.

Stephen stood on the side porch, drinking in the glory of the sunrise, with the Saco winding like a silver ribbon through the sweet loveliness of the summer landscape.

And the river rolled on toward the sea, singing its morning song, creating and nourishing beauty at every step of its onward path. Cradled in the heart of a great mountain-range, it pursued its gleaming way, here lying silent in glassy lakes, there rushing into tinkling little falls, foaming great falls, and thundering cataracts. Scores of bridges spanned its width, but no steamers flurried its crystal depths. Here and there a rough little rowboat, tethered to a willow, rocked to and fro in some quiet bend of the shore. Here the silver gleam of a rising perch, chub, or trout caught the eye; there a pickerel lay rigid in the clear water, a fish carved in stone: here eels coiled in the muddy bottom of some pool; and there, under the deep shadows of the rocks, lay fat, sleepy bass, old, and incredibly wise, quite untempted by, and wholly superior to, the rural fisherman's worm.

The river lapped the shores of peaceful meadows; it flowed along banks green with maple, beech, sycamore, and birch; it fell tempestuously over darns and fought its way between rocky cliffs crowned with stately firs. It rolled past forests of pine and hemlock and spruce, now gentle, now terrible; for there is said to be an Indian curse upon the Saco, whereby, with every great sun, the child of a paleface shall be drawn into its cruel depths. Lashed into fury by the stony reefs that impeded its progress, the river looked now sapphire, now gold, now white, now leaden gray; but always it was hurrying, hurrying on its appointed way to the sea.

After feasting his eyes and filling his heart with a morning draught of beauty, Stephen went in from the porch and, pausing at the stairway, called in stentorian tones: "Get up and eat your breakfast, Rufus! The boys will be picking the side jams today, and I'm going down to work on the logs. If you come along, bring your own pick-pole and peavey." Then, going to the kitchen pantry, he collected, from the various shelves, a pitcher of milk, a loaf of bread, half an apple-pie, and a bowl of blueberries, and, with the easy methods of a household unswayed by feminine rule, moved toward a seat under an apple-tree and took his morning meal in great apparent content. Having finished, and washed his dishes with much more thoroughness than is common to unsuperintended man, and having given Rufus the second call to breakfast with the vigor and acrimony that usually marks that unpleasant performance, he strode to a high point on the river-bank and, shading his eyes with his hand, gazed steadily down stream.

Patches of green fodder and blossoming potatoes melted into soft fields that had been lately mown, and there were glimpses of tasseling corn rising high to catch the sun. Far, far down on the opposite bank of the river was the hint of a brown roof, and the tip of a chimney that sent a slender wisp of smoke into the clear air. Beyond this, and farther back from the water, the trees apparently hid a cluster of other chimneys, for thin spirals of smoke ascended here and there. The little brown roof could never have revealed itself to any but a lover's eye; and that discerned something even smaller, something like a pinkish speck, that moved hither and thither on a piece of greensward that sloped to the waterside.

"She's up!" Stephen exclaimed under his breath, his eyes shining, his lips smiling. His voice had a note of hushed exaltation about it, as if "she," whoever she might be, had, in condescending to rise, conferred a priceless boon upon a waiting universe. If she were indeed a "up" (so his tone implied), then the day, somewhat falsely heralded by the sunrise, had really begun, and the human race might pursue its appointed tasks, inspired and uplifted by the consciousness of her existence. It might properly be grateful for the fact of her birth; that she had grown to woman's estate; and, above all, that, in common with the sun, the lark, the morning-glory, and other beautiful things of the early day, she was up and about her lovely, cheery, heart-warming business.

The handful of chimneys and the smoke spirals rising here and there among the trees on the river-bank belonged to what was known as the Brier Neighborhood. There were only a few houses in all, scattered along a side road leading from the river up to Liberty Centre. There were no great signs of thrift or prosperity, but the Wiley cottage, the only one near the water, was neat and well cared for, and Nature had done her best to conceal man's indolence, poverty, or neglect.

Bushes of sweetbrier grew in fragrant little forests as tall as the fences. Clumps of wild roses sprang up at every turn, and over all the stone walls, as well as on every heap of rocks by the wayside, prickly blackberry vines ran and clambered and clung, yielding fruit and thorns impartially to the neighborhood children.

The pinkish speck that Stephen Waterman had spied from his side of the river was Rose Wiley of the Brier Neighborhood on the Edgewood side. As there was another of her name on Brigadier Hill, the Edgewood minister called one of them the climbing Rose and the other the brier Rose, or sometimes Rose of the river. She was well named, the pinkish speck. She had not only some of the sweetest attributes of the wild rose, but the parallel might have been extended as far as the thorns, for she had wounded her scores,--hearts, be it understood, not hands. The wounding was, on the whole, very innocently done; and if fault could be imputed anywhere, it might rightly have been laid at the door of the kind powers who had made her what she was, since the smile that blesses a single heart is always destined to break many more.

She had not a single silk gown, but she had what is far better, a figure to show off a cotton one. Not a brooch nor a pair of earrings was numbered among her possessions, but any ordinary gems would have looked rather dull and trivial when compelled to undergo comparison with her bright eyes. As to her hair, the local milliner declared it impossible for Rose Wiley to get an unbecoming hat; that on one occasion, being in a frolicsome mood, Rose had tried on all the headgear in the village emporium,-- children's gingham "Shakers," mourning bonnets for aged dames, men's haying hats and visored caps,--and she proved superior to every test, looking as pretty as a pink in the best ones and simply ravishing in the worst. In fact, she had been so fashioned and finished by Nature that, had she been set on a revolving pedestal in a show-window, the bystanders would have exclaimed, as each new charm came into view: "Look at her waist!" "See her shoulders!" "And her neck and chin!" "And her hair!" While the children, gazing with raptured admiration, would have shrieked, in unison, "I choose her for mine."

All this is as much as to say that Rose of the river was a beauty, yet it quite fails to explain, nevertheless, the secret of her power. When she looked her worst the spell was as potent as when she looked her best. Hidden away somewhere was a vital spark which warmed every one who came in contact with it. Her lovely little person was a trifle below medium height, and it might as well be confessed that her soul, on the morning when Stephen Waterman saw her hanging out the clothes on the river bank, was not large enough to be at all out of proportion; but when eyes and dimples, lips and cheeks, enslave the onlooker, the soul is seldom subjected to a close or critical scrutiny. Besides, Rose Wiley was a nice girl, neat as wax, energetic, merry, amiable, economical. She was a dutiful granddaughter to two of the most irritating old people in the county; she never patronized her pug-nosed, pasty-faced girl friends; she made wonderful pies and doughnuts; and besides, small souls, if they are of the right sort, sometimes have a way of growing, to the discomfiture of cynics and the gratification of the angels.

So, on one bank of the river grew the brier rose, a fragile thing, swaying on a slender stalk and looking at its pretty reflection in the water; and on the other a sturdy pine tree, well rooted against wind and storm. And the sturdy pine yearned for the wild rose; and the rose, so far as it knew, yearned for nothing at all, certainly not for rugged pine trees standing tall and grim in rocky soil. If, in its present stage of development, it gravitated toward anything in particular, it would have been a well-dressed white birch growing on an irreproachable lawn.

And the river, now deep, now shallow, now smooth, now tumultuous, now sparkling in sunshine, now gloomy under clouds, rolled on to the engulfing sea. It could not stop to concern itself with the petty comedies and tragedies that were being enacted along its shores, else it would never have reached its destination. Only last night, under a full moon, there had been pairs of lovers leaning over the rails of all the bridges along its course; but that was a common sight, like that of the ardent couples sitting on its shady banks these summer days, looking only into each other's eyes, but exclaiming about the beauty of the water. Lovers would come and go, sometimes reappearing with successive installments of loves in a way wholly mysterious to the river. Meantime it had its own work to do and must be about it, for the side jams were to be broken and the boom "let out" at the Edgewood bridge.