VII - The Birdling Flies Away 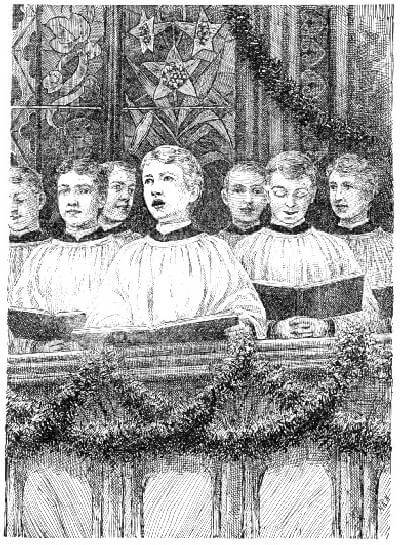 The Ruggleses had finished a last romp in the library with Paul and Hugh, and Uncle Jack had taken them home and stayed a while to chat with Mrs. Ruggles, who opened the door for them, her face all aglow with excitement and delight. When Kitty and Clem showed her the oranges and nuts that they had kept for her, she astonished them by saying that at six o'clock Mrs. Bird had sent her in the finest dinner she had ever seen in her life; and not only that, but a piece of dress-goods that must have cost a dollar a yard if it cost a cent.

As Uncle Jack went down the rickety steps he looked back into the window for a last glimpse of the family, as the children gathered about their mother, showing their beautiful presents again and again,—and then upward to a window in the great house yonder. "A little child shall lead them," he thought. "Well, if—if anything ever happens to Carol, I will take the Ruggleses under my wing."

"Softly, Uncle Jack," whispered the boys, as he walked into the library a while later. "We are listening to the music in the church. The choir has sung 'Carol, brothers, carol,' and now we think the organist is beginning to play 'My ain countree' for Carol."

"I hope she hears it," said Mrs. Bird; "but they are very late to-night, and I dare not speak to her lest she should be asleep. It is almost ten o'clock."

The boy soprano, clad in white surplice, stood in the organ loft. The light shone full upon his crown of fair hair, and his pale face, with its serious blue eyes, looked paler than usual. Perhaps it was something in the tender thrill of the voice, or in the sweet words, but there were tears in many eyes both in the church and in the great house next door.

There were tears in many eyes, but not in Carol's. The loving heart had quietly ceased to beat, and the "wee birdie" in the great house had flown to its "home nest." Carol had fallen asleep! But as to the song, I think perhaps, I cannot say, she heard it after all!

So sad an ending to a happy day! Perhaps—to those who were left; and yet Carol's mother, even in the freshness of her grief, was glad that her darling had slipped away on the loveliest day of her life, out of its glad content, into everlasting peace.

She was glad that she had gone as she had come, on the wings of song, when all the world was brimming over with joy; glad of every grateful smile, of every joyous burst of laughter, of every loving thought and word and deed the dear last day had brought.

Sadness reigned, it is true, in the little house behind the garden; and one day poor Sarah Maud, with a courage born of despair, threw on her hood and shawl, walked straight to a certain house a mile away, up the marble steps into good Dr. Bartol's office, falling at his feet as she cried, "Oh, sir, it was me an' our children that went to Miss Carol's last dinner-party, an' if we made her worse we can't never be happy again!" Then the kind old gentleman took her rough hand in his and told her to dry her tears, for neither she nor any of her flock had hastened Carol's flight; indeed, he said that had it not been for the strong hopes and wishes that filled her tired heart, she could not have stayed long enough to keep that last merry Christmas with her dear ones.

And so the old years, fraught with memories, die, one after another, and the new years, bright with hopes, are born to take their places; but Carol lives again in every chime of Christmas bells that peal glad tidings, and in every Christmas anthem sung by childish voices. 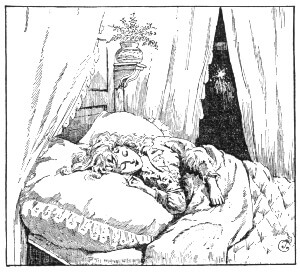